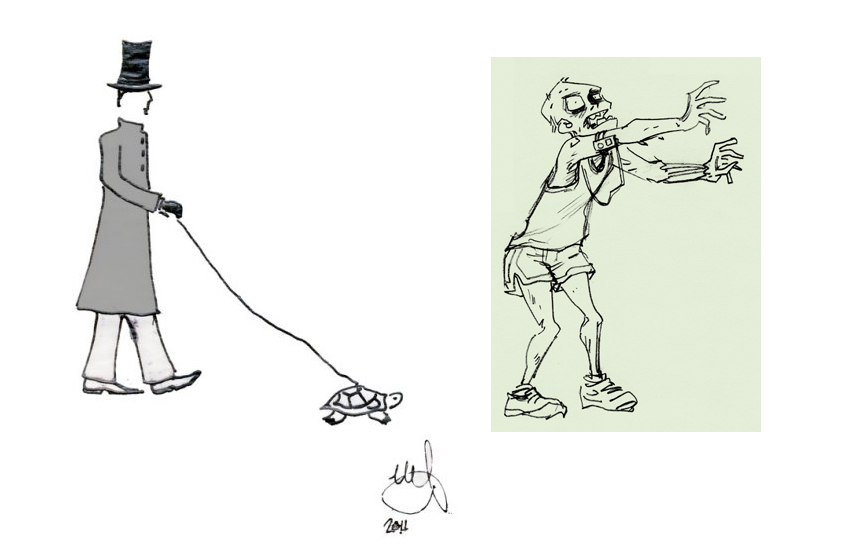 The Zombie; A Post-Human, Becoming-Undead Flaneur?

The zombie as we see in many pop culture examples is a figure that slowly stumbles around, or, in the case of 28 Days Later and other filmic interpretations of another zombie genre, the “Fast Infected Zombie” as described on the zombie wiki, it runs around. Though there is much to say about the cultural connotations of the zombie as a being who unthinkingly inhabits and consumes the world and other beings in it, I will not necessarily be addressing this issue. Rather, what I would like to address in these few words is the trajectory of the 19th century archetype of the flâneur into 20th and 21st century understandings of the zombie as a violent consumer. I’m interested in complicating the seemingly diametrical opposition of these two figures. It seems that a continuum spans from the flâneur, the quintessential disinterested individual, to the zombie, the quintessential nonthinking, non-sentient, violent being.

The flâneur of the 19th century strolled around. Slowly. Sometimes walking a turtle to make it patently clear that he had nowhere else to be other than walking this draggingly languorous turtle through the arcades. The flâneur, and arguably the artist, is supposedly a “man of the world” for Baudelaire. In his essay, “The Painter of Modern Life,” writing on his meeting with a one Monsieur G., described as “by nature a great traveller and cosmopolitan,” that he “was not precisely an artist, but rather a man of the world.” [1] Further, Baudelaire asks us to understand the artist as a man of the world by claiming that he is a “a man of the whole world” and that his “interest is the whole world; he wants to know, understand and appreciate everything that happens on the surface of our globe” (7). This man, in Baudelaire’s terms, a “man-child” exists in a state of wonderment with the sights of the city and the world. However, he is also supposed to be “insensitive” to these sights and experiences; he is a man-child dandy. Baudelaire calls Monsieur G. a dandy and claims that “I should have several good reasons for that; for the word ‘dandy’ implies a quintessence of character and a subtle understanding of the entire moral mechanism of this world; with another part of his nature, however, the dandy aspires to insensitivity” (9). The dandy is able to remove himself from the phenomenon of the crowd through his particular individuality.

Walter Benjamin, through his readings of Baudelaire’s writings and poetry, arrived at the flâneur as a particular cultural figure of 19th century Europe. He writes in his essay on the flâneur that the flâneur used the arcades as if they were his home. Benjamin writes: “As for himself, he obtains there the unfailing remedy for the kind of boredom that easily arises under the baleful eyes of a satiated reactionary regime.”[2] However, this mode of inhabitance was coupled with a consuming vision that had an insatiable desire for the sights of the city and the crowd. The emergence of the masses in 19th century Europe, with its crowds and public transportation created a sentiment of terror; the genre of detective fiction had its origins in this terror. The flâneur, supposedly removed from this crowd, took the position of observer, detective, he could nose out the criminal lurking in the crowd. Benjamin writes: “In times of terror, when everyone is something of a conspirator, everybody will be in a situation where he has to play detective. Strolling gives him the best prospects of doing so … If the flâneur is thus turned into an unwilling detective, it does him a lot of good socially, for it accredits his idleness. He only seems to be indolent, for behind this indolence there is the watchfulness of an observer who does not take his eyes off a miscreant” (40-1).

It is at first easy to claim that the flâneur can think but the zombie cannot; the flâneur takes on the role of ordering and categorizing the world through his practices of observation. The flâneur, a bourgeois man, well-to-do with nothing to do, was a consumer of culture. He strolled through public spaces, but felt himself apart from the burgeoning crowd. He was cultured. He had taste. He had time. In contemporary fascination with the figure of the zombie, the critique often falls into the realm of metaphor for the mindless capitalist consumer. Couch potatoes and those addicted to video games, online shopping, or the like are designated as zombies. Those not out in the world, doing something. Or, in another interpretation, the zombie is the being that is controlled by another. In Haitian voodoo, the individual is given a poisonous draught which will put her in an almost dead-like state. She becomes an unthinking pawn caught in the torrents of the crowd. The flâneur is supposedly a free agent that is separate from the zombie crowd. However, I argue that we must examine this notion of the flâneur’s free agency with the supposedly lacking free agency of the zombie.

Susan Buck-Morss writes in her essay “The Flâneur, the Sandwichman, and the Whore” that with the rise of boulevards that destroyed the arcades which the flâneur had called his home, he could only “maintain a rhapsodic view of modern existence only with the aid of illusion, which is just what the literature of flanerie – physiognomies, novels of the crowd – was produced to provide. If at the beginning, the flâneur as private subject dreamed himself out into the world, at the end, flanerie was an ideological attempt to reprivatize social space, and to give assurance that the individual’s passive observation was adequate for knowledge of social reality.”[3] The physiognomy, a literature of categorization and typing, was a  splitting of real subjects in the world. These beings were quartered and consumed by the writing of them into a concrete literature. What separates this violence from the zombie’s consumption of human flesh? What does it mean to divide the world through sight or incorporation through eating? The zombie, the re-awakened dead, a walking corpse, is driven to survive by consuming human flesh. We shoot ‘em in the head to make ’em stop. Does the flâneur think about what he’s seeing? Is he incorporating these new sites into his consciousness? Is his supposed total individuality a mere reaction to his realization that he is completely non-individual? Where has the flâneur gone? Does he still walk among us? Buck-Morss claims that the figure of the flâneur became “extinct only by exploding into a myriad of forms, the phenomenological characteristics of which, no matter how new they may appear, continue to bear his traces, as Urform. This is the “truth” of the flâneur, more visible in his afterlife than in his flourishing” (105). So, I end with a two-part question: how do we conceive of a continuum of consciousness and consumption? and, what are the consequences of this continuum for how we see, navigate, and categorize our world? 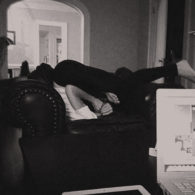