Whose Healing is It, Anyway?

It is now common knowledge that on June 17, 2015, a white supremacist in his early twenties shot up the historic Emanuel African Methodist Episcopal Church in South Carolina. It is common knowledge that his reprehensible act claimed nine black lives. The names of the victims are also common knowledge. In a gesture that was as much a moving act of commemoration and support as it was a refusal to let the ignorant killer’s ill-begotten fame overshadow the vivacity of those whose lives he took, individual internet users and media outlets alike adopted the #saytheirnames tag online. Those names are Rev. Clementa Pinckney, Tywanza Sanders, Cynthia Hurd, Rev. Sharonda Coleman-Singleton, Myra Thompson, Ethel Lee Lance, Rev. Daniel Simmons, Rev. DePayne Middleton-Doctor and Susie Jackson.

The performativity of commemorating lies in how monuments and memorials live in culture, allowing the memory of the dead to exist in reified space, physical or virtual, long after (or not long after) their corporeal forms have vanished. It allows memory to stay present yet also offers a contained vehicle for remembrance. By having an object, event, space—or, increasingly, virtual non-space, like #saytheirnames—to denote remembrance, the affective dimensions of grief can be modulated, creating possibilities for amplification and interaction with feeling, as well as disengagement from it. As #saytheirnames demonstrates, simple gestures can and do command engagement and reckoning with unspeakable loss.

By forefronting the names of the victims, social media unwittingly started a conversation about memory in contemporary America. Commemorating tragedy matters in our culture; because there is no shortage of tragedy, there is likewise no shortage of commemoration. Commemorative acts appear at every level – for example, in 1997, when beloved rapper Biggie Smalls (Notorious B.I.G.) was suspiciously gunned down, the Puff Daddy/Faith Evans/112 tribute anthem, “I’ll Be Missing You,” helped a generation of mourners grieve the death that nobody could seem to make sense of. In contrast is the National 9/11 Memorial complex that opened in 2011, which sprawls across multiple city blocks and cost multiple millions of dollars. Commemorative acts are intentional, performative, and often even transformative—they are sometimes the first stitches across the gulf of loss. Commemoration is as much about the lived act of remembering what was lost as it is about the loss itself. Erika Doss, author of Memorial Mania: Public Feeling in America, terms this “negotiating the crisis of grief.”[1] 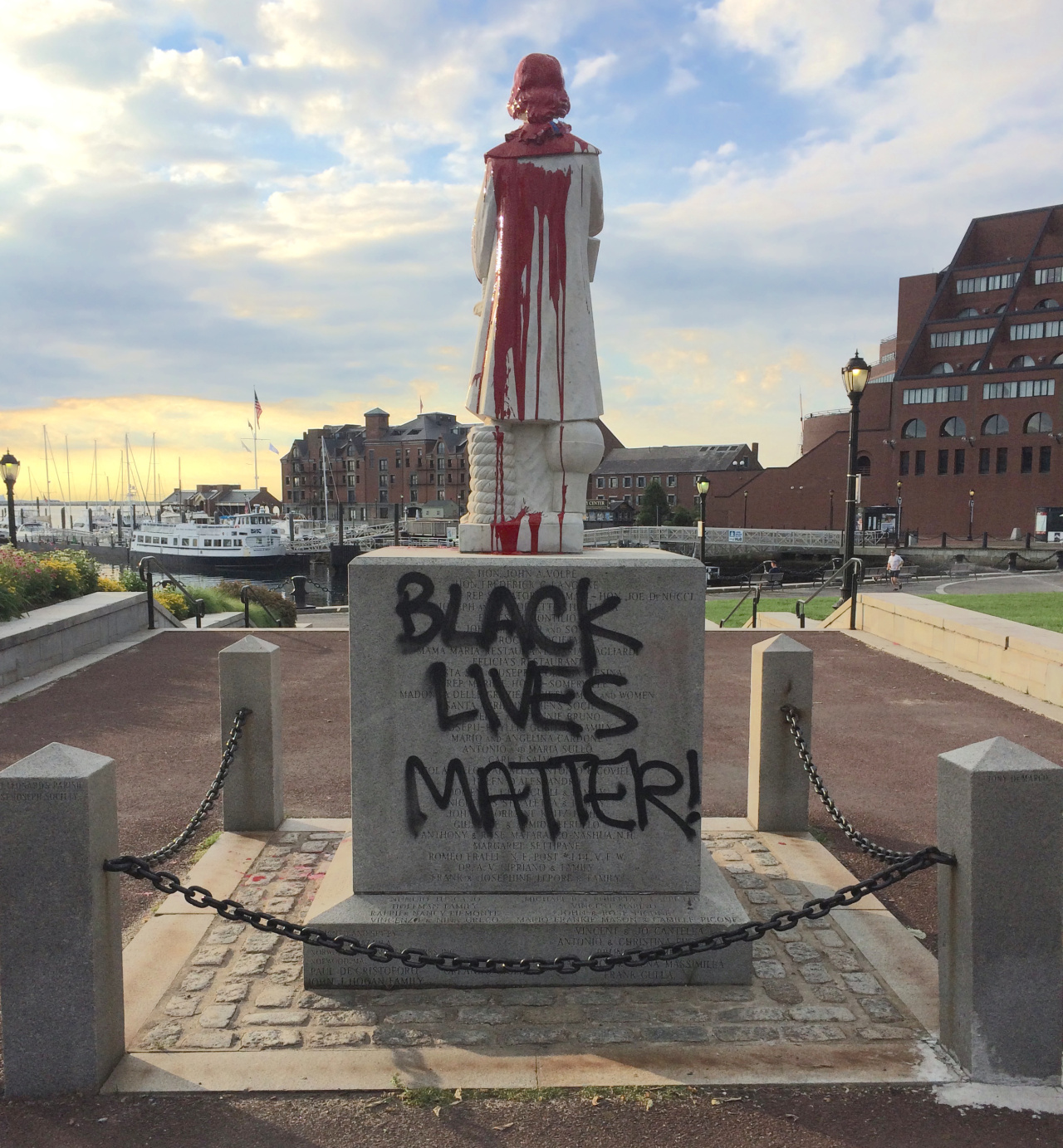 The Christopher Columbus statue on the North Waterfront, Boston (June 30, 2015).

The landscape of mainstream American public memory features a visual lexicon that centers on elevating individuals lost in tragedy, often by highlighting their names. Naming the dead has a rich, if complicated, tradition within American commemorative culture. As a commemorative strategy it works, most obviously, to honor the dead. But making memory tangible can have dubious outcomes. Given the complex and often distorted relationship that American commemoration has to history, sometimes the honor that commemoration bestows is misplaced and misguided. The American impulse is to whitewash histories of violence and oppression into comfortable narratives of heroism, innocence, and exceptionalism. We know commemoration can be powerful and healing if approached thoughtfully. But when we consider those whitewashed histories, it begs the question: whose healing is it, anyway? How does commemoration sometimes perpetuate oppression and stall the “healing”?

In my research on trauma and commemoration, it has become clear to me that what is often missing in commemoration that claims restorative or “healing” status is any actual attempt at reconciliation—that is, an acknowledgement of conflict that affects more than one party, often with disastrous consequences for both, and authentic accountability thereof. Trauma, and its attendant disconnection, festers and flares in the absence of social support and strong networks of tightly bound, empathetic community. Public memory is poised to prompt just such a discussion, and yet, so much of what has become our memorial landscape is really about dismissing that which falls outside of a comfortable narrative of white male heroism. In truth, we did colonize the land. We did colonize other peoples. Where is the monument to the true breadth of suffering that this country’s history knows? 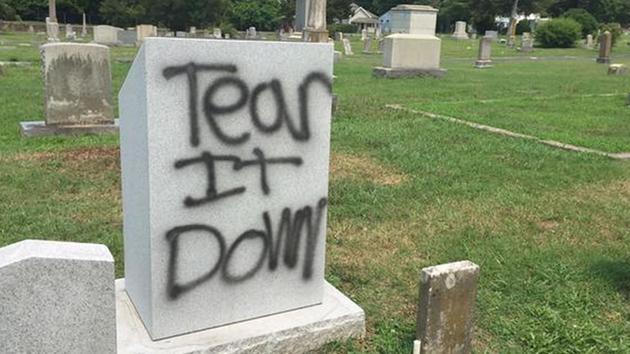 In contrast to, and in conversation with, the heartfelt, straightforward immediacy of #saytheirnames, there are contentious moments in America’s commemorative history—specifically, the Confederate monuments of the south. The deeply racialized histories of these monuments, like the monument in Charlotte, SC, cannot be ignored, even as they purport to celebrate “the valor of the Confederate soldier.” In several acts of a sort of inverted commemoration, unidentified and (rightfully) pissed-off folks covered the Charlotte monument with concrete and spray painted other Southern Confederate monuments with “Black Lives Matter.”

Upwards of 150,000 Confederate veterans and others came from around the country for the Charlotte monument’s unveiling in 1929. Far from being a quiet event attended by a small group of people, it was one of the largest events in the city’s history. Considering the present-day white supremacist murders by someone who celebrated the Confederacy by wearing a clothing patch printed with the Confederate flag, it is understandable that some Americans feel outraged by the monument and others like it.

Media coverage has used words like “vandalism” and “crime” to describe these recent interactions with Southern Confederacy monuments, but I refuse to perpetuate the narrative of delinquency because of the careless politicization of such rhetoric and the erasure it arrogantly enacts. Language does not exist in a vacuum; to call the spray painting of “Black Lives Matter” on a monument a “crime,” for example, privileges the racist history with which the words are meant to collide. It’s a jarring confrontation with a history that is, unfortunately, not quite as “past” as some would like to believe. I highlight this to further demonstrate what an activating and active force public memory can be. Anything outside our comfort zone of trusted memorial tropes will unsettle people, but shaking up the sacred established norms of the “canon of history” is especially unsettling. Commemoration is often all about the status quo, which is probably why the “vandalism” has been received so negatively. 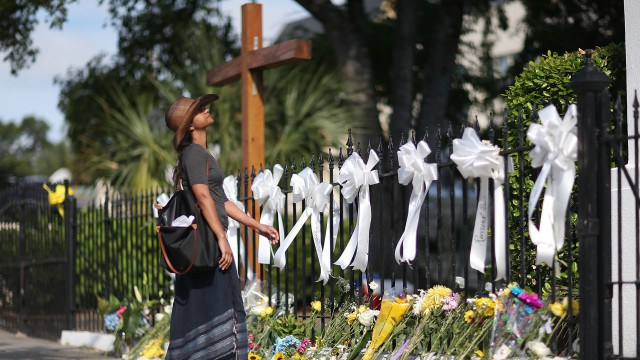 The naming of the Charleston Nine is a subversion, or at least a reclamation, of what the commemorative gesture has come to symbolize. Saying or writing the names of the victims does matter. This commemorative act matters. The act of naming, as scholar Marita Sturken observes, humanizes the dead and helps mourners bear witness.[1] This is especially essential when we recognize the histories of marginalized communities—fearless acknowledgement is a form of resistance to disempowerment. We have ignored or downplayed racial violence for too long, and the simple act of proliferating the names through our culture is a call to arms.

[1] Sturken, Marita. Tangled Memories: The Vietnam War, The AIDS Epidemic, and the Politics of Remembering. Berkeley: University of California Press, 1997.