Hair has always been a contentious component of the American psyche. From the highly politicized and arguably natural curls of George Washington, to the culture-shifting flapper bob, to Jackie O’s perfectly coiffed bouffant, hair is widely discussed, politicized, and activated. Hair even warranted its own musical in 1979: Hair: The American Tribal Love-Rock Musical. In some ways, hair is an incredibly public entity, despite its intimate relation to the body. Is hair every really ours?

The value and role of hair has certainly shifted over the last century. What was often thought of as an accessible object rife with creative and affective opportunity has been cast aside by contemporary culture. Hair is often something to be managed now: shaved off, trimmed, shaped, straightened, de-frizzed. This isn’t to say that hair hasn’t always been associated with ongoing maintenance but rather that hair wasn’t always seen as this kind of gross, morbid, extracurricular growth that tainted our bed linens and combs. In recent history, hair on brushes was not thrown away but saved for when creative inspiration struck.

The politics of hair are certainly not new. Hair has always been as political as the rest of one’s body and skin, denoting the specific place in which someone was situated in the cultural landscape. The length and curl of a woman’s hair often correlates to her class standing. As historical fashions changed, women were expected to begin shaving their (now exposed) legs and armpits, particularly during the radical shortening of hems and sleeves in the wild 1920s.

The history of race and hair also important in considering the way that hair has been thought of and taken up in American culture. For Native Americans, the cutting of long hair into cropped, shorter styles for all boys and men represented a particularly aggressive infringement on religion and identity. Schools like the Carlisle Indian School in Carlisle, PA, founded in 1879, saw the cutting of hair as a means of integrating natives into white culture. The language and expectations around Black American hair have also been heavily policed, with Black hair historically discussed as an entity completely separate from European hair. In a recently published piece in The New York Times, titled When Black Hair is Against the Rules, authors Ayana Byrd and Lori I. Tharps remind us: “In the 18th century, British colonists classified African hair as closer to sheep wool than human hair.”[1] In some ways, this has not changed. Natural hair philosophies gained momentum during the Civil Rights Movement, but they faced substantial backlash. Even today, black women growing out their natural hair have been taught to be concerned about their career advancement, and braids and dreads are often understood as radical hairstyles that may lead to problematic interactions.[2]

A hairdressing tutorial from 1948 on permanent straightening

Hair embodies many things, including the memory of its former holder. For a particular social group—white women, mostly middle to upper class—hair has been a crucial part of memorial culture. (Non-white women did engage in memorial work with hair, but historical research and museum collections may not represent their objects in the same way.) Whether a lock of hair was trimmed from a living loved one or clipped after death and before burial, it was an intensely intimate object, one that never fades. Human hair is made primarily of keratin, a tough protein that makes it resistant to decay and therefore one of the most enduring of material memorials.

Whether left untouched and placed in a locket or intricately braided into a bracelet, hair was used for remembrance. By including a small lock of hair, the body of the dead was placed on the body of the living. A lock of hair was given a kind of holy status, like a relic, when placed in an ornamental vessel. Its small size and proximity to the flesh provided a special intimacy; this memorial establishes a physical communion with the bearer. Hair represents the actuality of the body, creating an explicit connection between emotional response and memory.

By including an actual remnant from the dead, hair work memorials and jewelry also document Victorian sentiments concerning loss. While hair work started in Europe in the 17th and 18th centuries, it became much more popular in the United States in the early 19th century.  Commonly regarded as a feminine folk art, the use of hair embodied a certain social value. Referencing earlier hair work in “Sentimental Cuts: Eighteenth-Century Mourning Jewelry with Hair,” scholar Christine Holm describes the intimacy and intention behind cutting a lock of hair.

The separated hair can last forever whereas the body will not. Moreover, the separated hair will no longer grow, it embodies as materialized time an epoch that is absolutely past. Its temporal semantics privileged and still privilege the hair cut in the rites de passage. The cut edge of the hair in the material medium of remembrance marks the act of remembrance as the very moment when its natural status was transformed into a cultural status, and when the present presence of the body is anticipated as a future absence.[3]

The complex relationship between the body of the living and the hair of the dead offers insight on the constant entanglement between the mourning and the memorial. The desire to represent one’s own mourning in a public and visible way was part of a nineteenth-century culture in which discussion of death was common. The presence of death was visible on a daily basis.

The hair wreath is a particular approach to hair work that relied on a very skilled set of hands to make. The hair would be collected, separated into individual strands, then joined together in dozens of unique braiding and weaving types. Wreaths were often constructed of many smaller pieces that would eventually be joined together to form a larger object. These smaller pieces might have included long, tightly wound coils, or even small flowers made form hair. Sometimes, a small bead or fake pearl would be affixed to the center of the hair flower, ensuring that the viewer was able to determine the floral pattern. Some wreaths also included images, words, dried flowers or plants, and other found items. These objects may have been memorials to close friendships, families, or even moments in the makers’ lives. 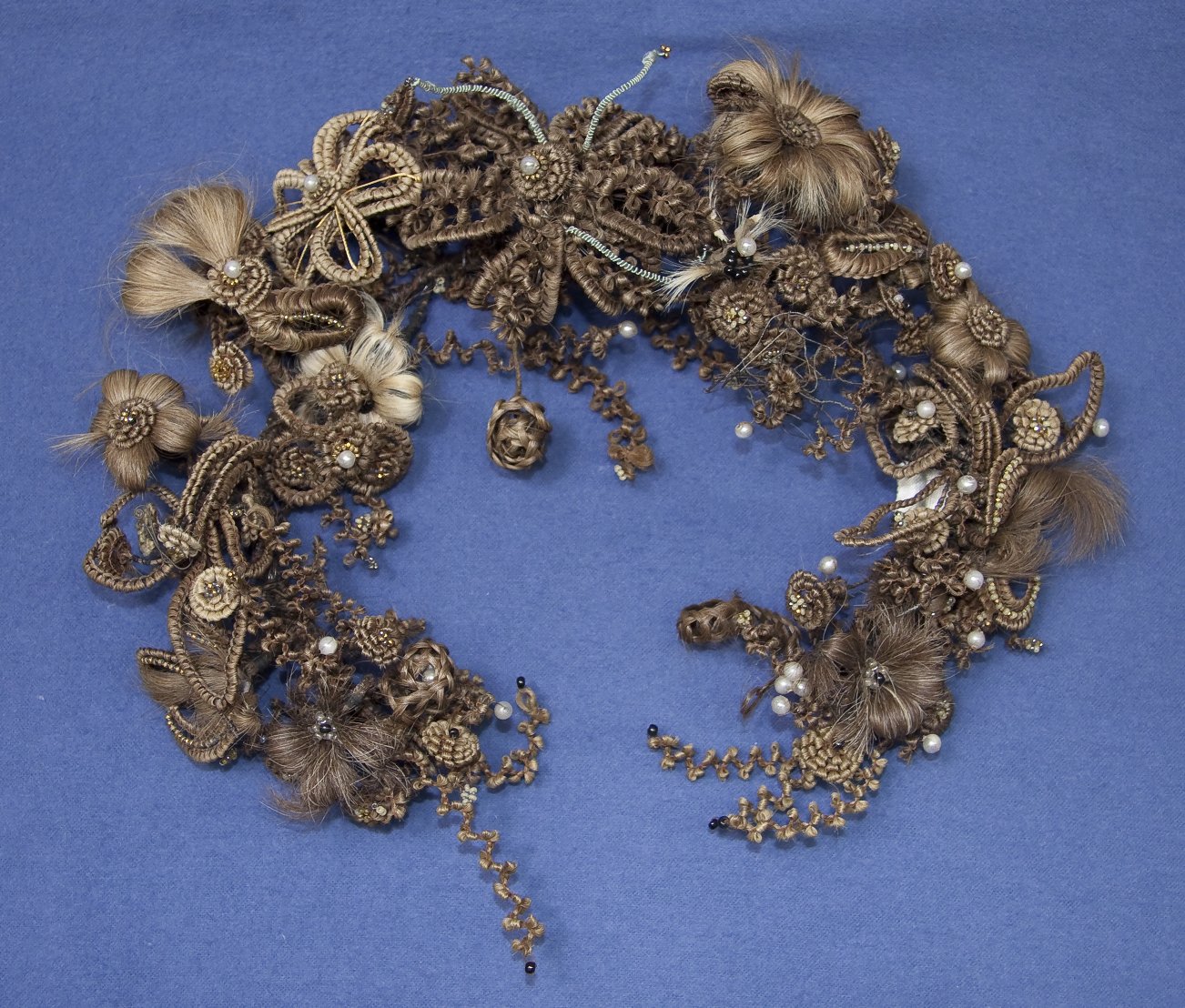 The maker of the wreath would join the many intricate parts, woven from different shades of hair and often from many different heads, together. The entire wreath would be adhered to a backing and would be ready for presentation in the home. Hair wreaths are often horseshoe shaped but also came in ovals, circles, or other less regular shapes such as oblong bouquets. They are often found carefully preserved in recessed, glass encased frames.

Not all hair work was memorial-based. Some hair wreaths represented a vast family tree, weaving together the hair of one’s own extended family, as a means of highlighting lineage. Hair from one’s parents, children, cousins, and aunts may be woven together in one wreath. Hair clippings were often paired with photographs and shared with loved ones, elevating the photograph to an object that could be touched and held in absence. For example, Civil War soldiers from the Confederate and Union armies may have had a photographic portrait taken before heading off to war and included a clipping of hair along with it.[4] Whether or not the soldier returned, his family would cherish his hair as well as the image. Hair work and hair wreaths took on many complicated moments between families and lovers, both living and the dead, and were understood as works of art with warm and endearing implications. Despite contemporary responses to this possibly morbid or bizarre practice, hair wreaths were considered touching gestures. 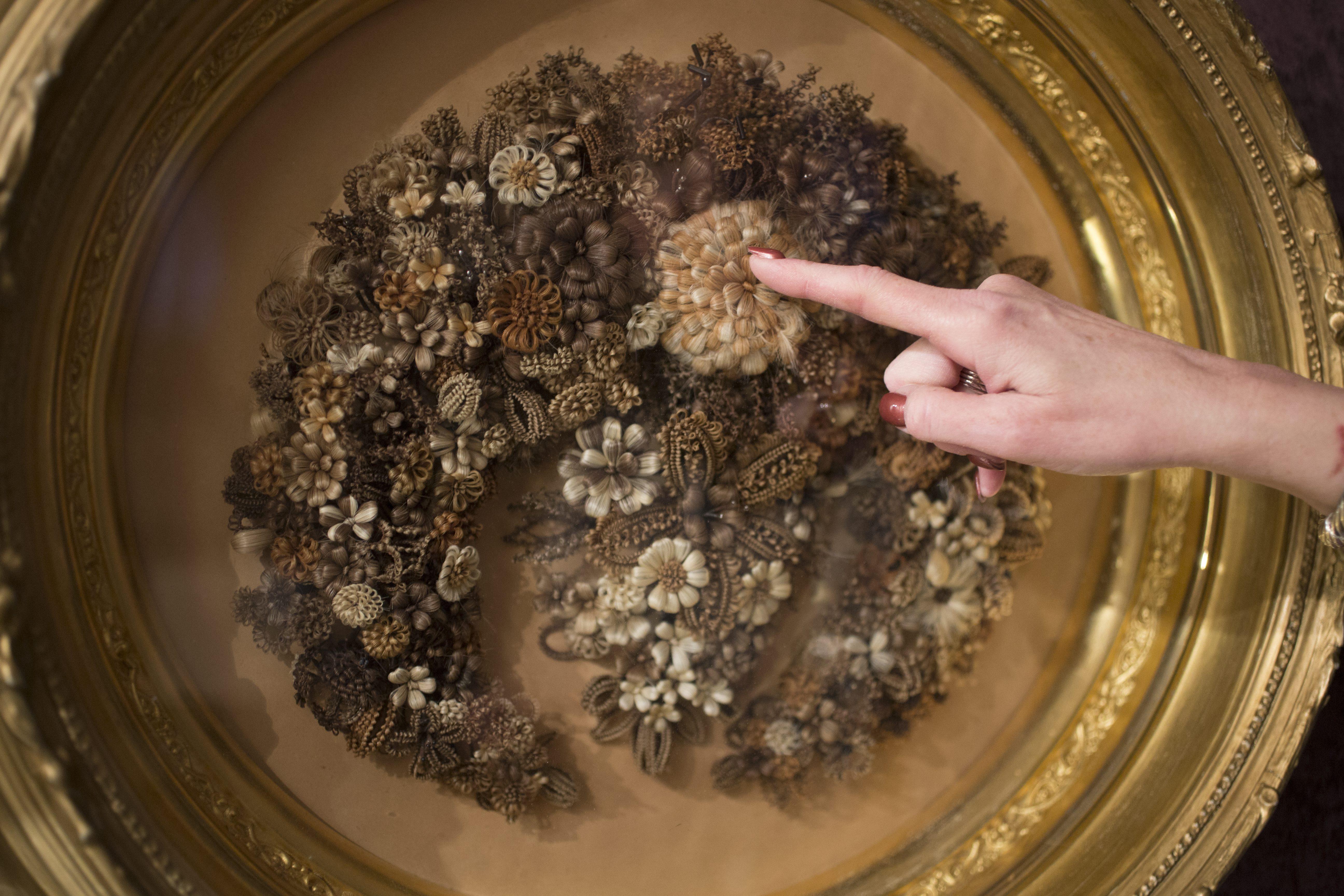 The handmade memorial was a highly personalized approach to creating an object of commemoration. This largely feminine act of commemoration is a labor-intensive task to move through mourning while also creating a beautifully embellished piece of art, either for the home or for the body. As Geoffrey Batchen writes in Forget Me Not: Photography and Remembrance, “Through this skillful act of remembrance, this labor of respect, history is made personal, and an otherwise banal portrait [is] made to seem like a sacred relic.”[5] Batchen emphasizes both the act and the labor of the memorial. Not only is the outcome, the memorial itself, of importance, but the process of its creation is also valuable.

Hair wreaths were very popular in the middle and later parts of the 19th century, and in many ways, their popularity exemplifies American attitudes toward women’s roles. Hair was understood to fall within the feminine realm, which included many things related to the upkeep and care of bodies within the domestic sphere. It was the duty of women to keep both the home and the family clean and functioning.

Hair wreaths made from hair of the deceased also spoke to Victorian norms and understandings of death. Death was understood as being called home by God, and children were often reminded that a funeral is the closest that they could get to heaven while alive.[6] There were also many funerals to attend: the infant mortality rate was quite high, germ theory was yet to be fully understood and taken up in medicine, and vaccines and antibiotics simply weren’t around yet. The hair wreath would serve as a memorial to all of those who had died, and their hair might be the only remnant of their short life. Since hair had come from the body of the living, it served as a very real reminder of their loss. 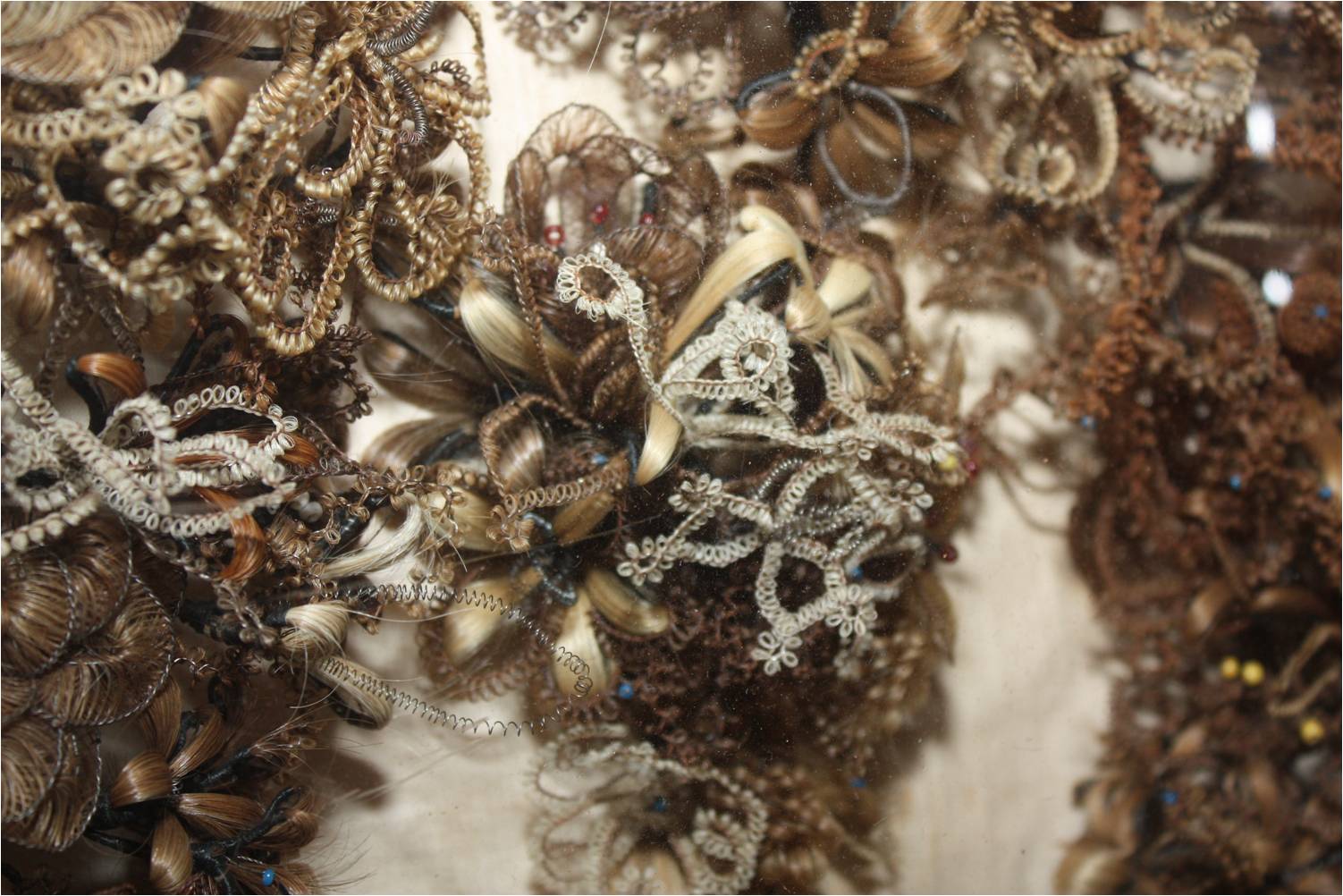 The hair wreath eventually faded from popular culture. Once hung as an enduring decoration in parlors, in the early 20th century hair wreaths were taken from walls and stashed in closets. Like many other “morbid” Victorian customs, the hair wreath served as a reminder of days when children died young and women stayed indoors, crafting meticulously. The interior design of homes also shifted to include photographs of families, since photographic technology was becoming more accessible and affordable.

In contemporary culture, hair wreaths have faded out of popularity. They are often found in antique stores and estate sales, left to be discovered by a knowing eye. Because hair is often seen as something grotesque, realizing that the object is made of human hair can be startling. The skill of hair weaving for objects like wreaths is also on the way out. One of the only remaining establishments to teach the trade and history of hair work is at Leila’s Hair Museum in Independence, Missouri. It hosts visitors from across the world to view hair work, hair jewelry, and keep the unique tradition alive.

Memorial making was part of a mourning culture which was integral to culture as a whole. The handmade memorial is a material commemoration of both the living and the dead. It is granted great meaning in an object-based culture, incorporating the love, hope, and tenderness of its creation. Makers of hair-based memorials were also rejecting mass-produced objects and actively pushing against the burgeoning capitalist expectations of the early 20th century; hair work required minimal tools and used the body’s own hair as a substrate.

When second wave feminists chanted that the personal is political, they may not have been talking directly about hair, but the sentiment rings true. Our hair is one of the most uniquely personal part of our bodies, bodies that exist in a politicized sphere. Hair has played a key role in measuring the social landscape, and despite the faded popularity of the hair wreath, hair remains a personal and political talking point.