The relationship between producer and consumer/spectator is constantly evolving, and it has become the norm to weave the personal into the public. Cookbooks are no exception; the way we view cooking and recipes has changed. Kim Severson writes, “the recipe is being blown up altogether…Recipes also are taking their cues from novels, with artful prose woven into the steps.”[1] Sitting down with Date Night In feels exactly like this—a novel with artful and subtle suggestions of delicious things to eat. Severson points out that cookbooks are no longer just about finding something to make for dinner: “As Food Network personalities, country music stars and actors flood the zone with frothy books filled with simple recipes, the cook who can write with a certain literary complexity is becoming a treasure.” [2] Date Night In may not be a treasure, but neither is it a traditional cookbook.

In Date Night In, the author, Ashley Rodriguez, shares her personal story of creating “date nights” at home with her husband. She encourages the reader to shake off an observer’s position and use her book to create date nights of their own. If I were to sit down with the canonical Joy of Cooking, I would find straightforward writing that emphasizes technical direction and the food handling. Date Night In, however, feels like a story.

Poet and literary critic Susan Stewart, writing on the book and narrative discourse, examines how the relationship between the author and the consumer of the written word has changed over time. She argues that “from the Renaissance onward, a tendency to replace collective experience with individual experience had evolved” to a situation in which “the particularity of everyday life and the individual’s experience in this world became the locus of the real.”[3]  As such, the individual, the writer, steps into a position of power and becomes the authoritative voice. Stuart also notes that contemporary readers are placed in the position of an observer in relation to a work, a point which is especially relevant to the cookbook.[4] A cookbook is not only a book in the simplest sense of the word, but also a guide, a manual, and now, the physical object that often represents the virtual space of food blogs. The relationship between reader and writer becomes blurred as the reader becomes a participant. 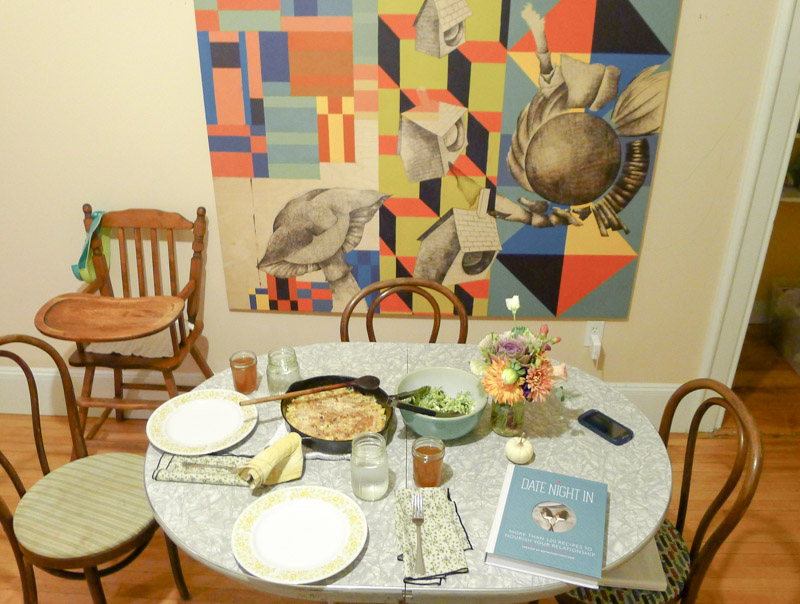 A recreated Date Night In. Photo by the author for Dilettante Army.

I am curious to become a consumer of this book, of its ideology. Can Rodriguez’s individual experience become mine? And by doing this, am I becoming a part of the larger group of couples participating in “date nights in”? And if so, what is this group I am becoming a part of? I thought about this while I chose where to begin in the book.

The cookbook is organized into sections by season, each of which is split into five or six menus that include a beverage, two to three courses, and a dessert. Each of these menus is meant to be an outline for a “date.” The dates are themed and named—some examples include “Wooed by Fried Chicken,” “Dinner and a Movie,” and “A Sort-of Fairy Tale.”[5] A short vignette precedes each of these dates that highlights the food to come and often includes a little lesson on how to “nourish your relationship.”

Stewart believes “the ‘personal experience story’ serves to structure…narrative within larger conventions, indeed generic conventions, for interpreting experience.”[6] She explains further that these types of stories can be compared to fiction or the novel in its “refinement of notions of character, incident, action, and scene in relation to changing cultural values.”[7] By reenacting and recording my experience with Date Night In, I’m creating a kind of theater, turning my home into a stage to act out someone else’s story. My home has become a place where somebody else’s ideas and life experiences somehow become mine. Date Night In’s non-fictional structure becomes fictive, fantasy. 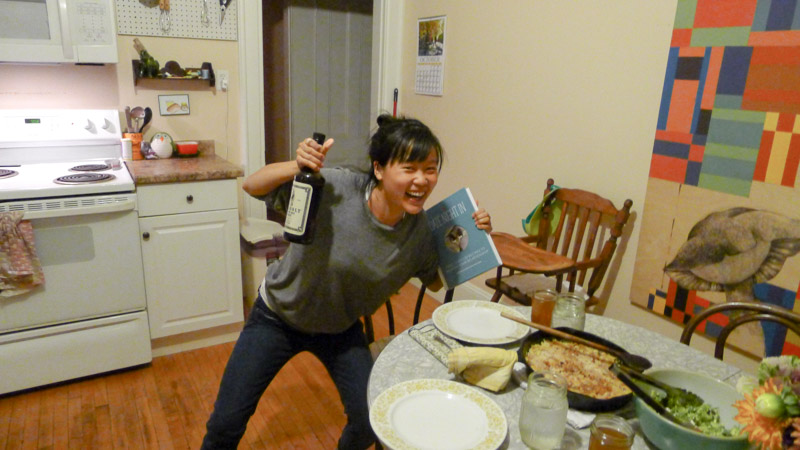 The recipe’s requisite bourbon. Photo by the author for Dilettante Army.

If cookbooks are taking a turn into the personal, becoming intertwined with a memoir, it is not far off to say that cookbooks are entering the fantastic. Bee Wilson writes about this phenomenon in her recent New York Times Magazine article, “The Archive of Eating.”

Cookbooks show us at our most defenseless because they expose things we believe we lack: meringues that don’t fall; soup that will fill us up without making us fat; dinners that cook in no time at all. They allow us to imagine ourselves as bountiful hosts or artisanal pastry makers. It isn’t all fantasy, though. Cookbooks also speak to, and soothe, something real: the hunger that started when we were babies, when food and security were one and the same.”[8]

Somewhat fittingly, I chose the date/menu entitled “Fall Comfort.” Food becomes a security blanket against a bleak fall, a season that previews the cold of the coming months. I also chose this menu for practical reasons: 1.) I’m cheap and realized the recipes used ingredients I (mostly) had on hand and 2.) The recipes seemed to be the most convenient to make with the workload I had that week.

The menu for “Fall Comfort” is as follows:

Rodriguez provides a few organizational markers: Timeline, Grocery, and Pantry (which is a list of what she assumes the reader already has in the pantry). This denotes an relationship between writer and reader. She, as the authoritative writer, is gently telling the reader what is expected of her (or him). I am expected to, among other things, always have onions, Dijon mustard, champagne vinegar, and bourbon on hand. The Timeline begins three days in advance by making Grandma’s Apple Cake, spiced cider, and slaw dressing. I did these three tasks and felt pretty chuffed, thinking “I can do this!”

The White Bean and Pumpkin Gratin was a cinch and as Rodriguez describes it, “the edible equivalent of a warm, pillowy blanket on a cold day—comfortable” with its half cup of heavy cream and butter.[9] She also goes on to describe it as “reminiscent of a green bean casserole,” which was the clincher, given my fascination.[10] Rodriguez assumes that green bean casserole is familiar to the reader, a dish that provides comfort and warmth on a cool fall evening. 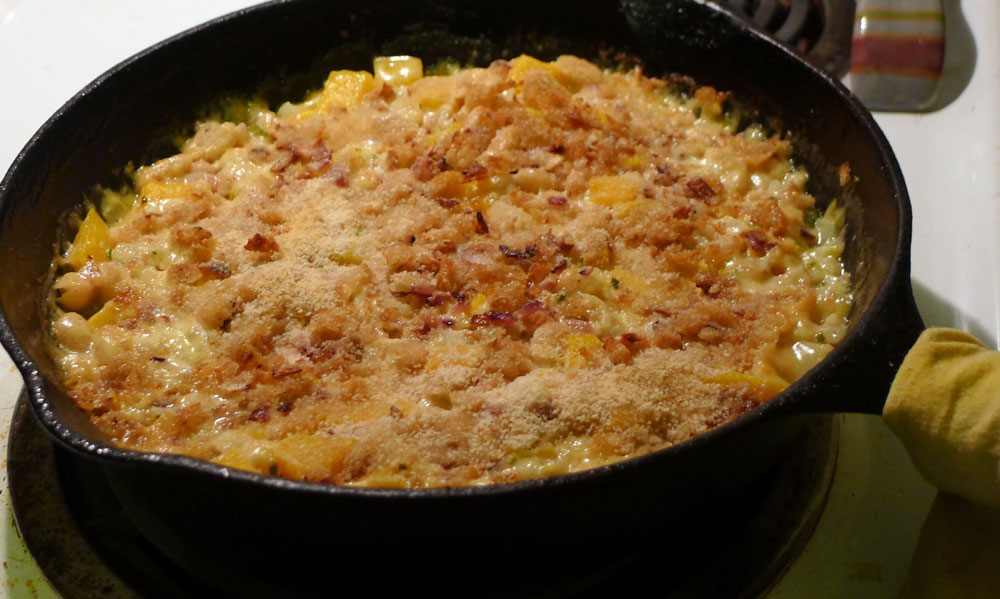 White bean and pumpkin gratin. Photo by the author for Dilettante Army.

As the timeline moves on, things continued smoothly until I came upon two things: the Brussels Sprouts Slaw and the Maple Cream for the cake. The recipe for the Slaw, at first glance, was easy enough: shred the sprouts, halve the grapes, and throw on some dressing and feta. But then the introduction to the actual recipe mentions that “a mandolin makes quick work of shredding the little sprouts.”[11] The pantry and grocery list did not suggest a mandolin, which I do not have. If you’ve never tried to “shred” sprouts while bribing a toddler with halved grapes in an effort to have her sit still, I don’t suggest it. 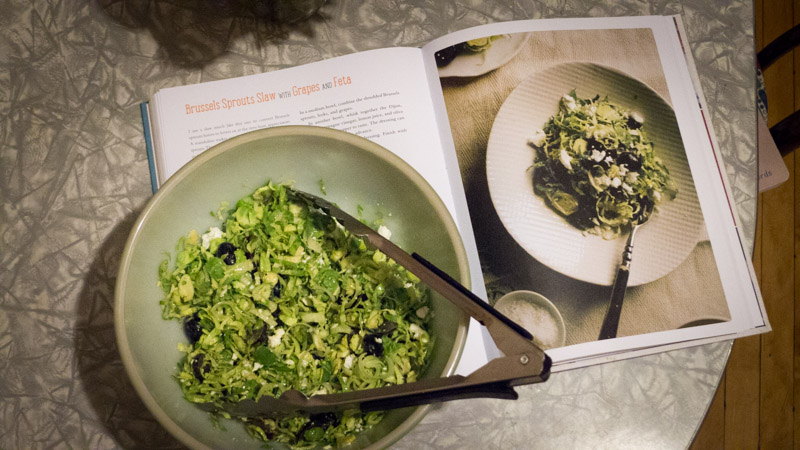 Brussels sprouts slaw. Photo by the author for Dilettante Army.

As for the Maple Cream, the name led me to believe this would be a simple recipe. However, the cream is actually crème fraîche, a fermented cream that Rodriguez suggests the reader make at home. Its cook time is anywhere between three and twenty-four hours, as the cream must sit and ferment. I thought to myself, “this wasn’t on the timeline!” Rather than purchase crème fraîche, due to both my aforementioned thriftiness and poor timing, I poured some cream into a bowl, threw a cloth over it, and waited. On my way to work, I casually said to my partner, “Please don’t throw away that bowl of cream. It is fermenting and needs to stay out overnight.” He said nothing.

When it finally came time to sit and eat, we both thoroughly enjoyed the meal, although I couldn’t believe I had spent a little over three days making one dinner. My partner and I were able to sit down and have a moment’s peace after our usual day of navigating (aka surviving) parenthood while juggling multiple projects. And the bourbon wasn’t a terrible suggestion. I also honestly hadn’t eaten that much cream in I don’t know how long.

With this in mind, what about this #DateNightIn (yes, it’s a real hashtag) movement say about us, in the here and now? What drives us back to making our own fermented cream or breadcrumbs? Current food writing tends to emphasize “slow living” (as some would call it). Slow living is the “knowledge that good things in life take time.” Defined by many as a desire to return to the handmade, with buzz words such as living with “greater intention”, reconnecting and relearning skills such as foraging, floral arranging, and baking, and valuing “authenticity” and “quality.” While researching slow living, I found the quoted phrases above were found in multiple sources such as the Slow Living Today website and articles that document places such as Brooklyn pie shops and slow living retreats.

The desire to slow down and connect is ever-present in our new era of cookery and Date Night In is just one manifestation of it. Rodriguez links the nourishment of her domestic relationship with her husband to the food she makes for him and uses the meal as a vehicle for reconnection. She calls for her readers to not only observe but to do the same. With Bee Wilson, I continue to ask myself, “What secrets do we hope [cookbooks] will impart?”[12] This larger food movement, one that I am becoming a part of—although I should probably hashtag it to really join in—places importance on the home, a return to the kitchen, and all things homemade. Including the crème fraîche.

[3] Stewart, Susan. On Longing: Narratives of the Miniature, the Gigantic, the Souvenir, the Collection. Durham: Duke University Press, 2007. p. 4

[6] Stewart, Susan. On Longing: Narratives of the Miniature, the Gigantic, the Souvenir, the Collection. Durham: Duke University Press, 2007. p.21