On the Traumatic Messaging of Racist Fear

Dear white America, we are to blame for our pernicious racial climate. It comes from, among many other things, hundreds of years of our ancestors refusing to unpack the problematic messages and images they received about race and power. It comes from being taught to fear, and never having the courage to question it. It’s time to change that.

It is no secret that for some time there has been an American policing crisis. At the heart of this crisis are occurrences of police brutality and excessive force that would be banal, almost boring, in their frequency and predictability, were it not for their lethality—mappingpoliceviolence.org, a research collaborative that compiles data from police killings nationwide, found that 102 unarmed black people were murdered by police in 2015 alone. 2016 isn’t shaping up to be much different—on February 25th, police shot and killed Kisha Michael and Marquintan Sandlin while they were seated inside their car after a date. The couple was asleep and unarmed.

Across the country, the public’s attitude towards police has devolved into one of bitter sadness and disappointment as the police continue to kill unarmed people of color at the slightest provocation. Though abhorrent violence is difficult to understand regardless of how “well informed” you are, in the case of the policing crisis, we must think about the cultural and historical contexts that have allowed the power differential between police and people of color to get so out of hand. We must consider a kind of traumatic toxicity that results from centuries of ingrained racist fear. Could the fear of the officers (fear for their own lives, fear inspired by the black bodies they end up killing) be a sort of anticipatory pre-traumatic psychopathological artifact? 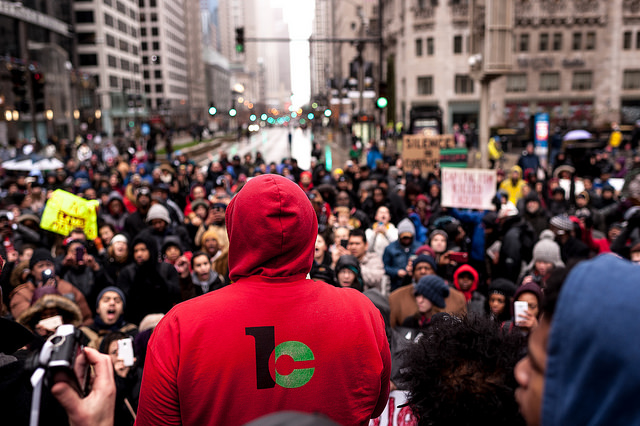 In a recent piece entitled, “The Paranoid Style of American Policing,” Ta-Nehisi Coates unpacks how distressingly commonplace it has become for police to “de-escalate” by killing. In the wake of the murders of Quintonio LeGrier and Bettie Jones, Coates suggests that American police have become police in name only. He argues that their brash, reactive, “paranoid” policing tactics have so delegitimized them as the just enforcers of community safety that citizens cannot invest in them any real sense of reliable protection; and as evidenced by a statement in the piece from LeGrier’s mother, Janet Cooksey, citizens indeed do not invest. Heartbreakingly, she comments about how the police are supposed to protect, yet they take lives.

These officers often view their most extreme defense as the only available method by which to diffuse a situation, which is striking because it mirrors the deeply disturbing patterns of traumatic stress and memory. One effect of trauma is a decreased ability to accurately perceive threat—what may indeed be a stressful situation gets interpreted as a life-threatening situation by a nervous system taxed by perceived fear and hyper-vigilance. The body and mind begin to interpret many things as deeply threatening. However, murder is only de-escalation in so far as it is the final escalation.

Thinking about history, and about trauma, about the way it can saturate and alter everything it touches, gives me an entrance point to the complex morphologies of the raced and racist American cultural imaginary. The officers involved in these cases tend to stand by statements that they feared for their safety during the confrontations—even in the Michael/Sandlin case, officers said they feared for their safety—but that they experienced fear and stress is not in question. The question is more like this: Why do police seem to experience more fear of black and brown bodies? What is the root of this overactive fear response?

The long history of racism is a bleak and painful one. For example, the 18th century naturalist Georges-Louis Leclerc, Comte de Buffon, became obsessed with blackness and, after reading several major travelogues of the time, attempted to taxonomize various African populations into multiple different “species.” Needless to say, these were generally not favorable categorizations; the casualness with which he writes illustrates the shameful prevalence of these attitudes. From Buffon:

On our islands, we prefer the nègres from Angola to those of Cap-verd [Senegal] for the strength of their bodies, but they smell so awful when they become hot, that the air in the places where they pass is contaminated…those from Cap-verd do not have an odor nearly as horrible as those from Angola…Those from Guinea are also very good for farm labor…those from Senegal are not as strong, but they are better suited for domestic service…[1]

Other scholars and philosophes frequently argued that Africans were not only destined for human slavery, but also predisposed to crime—particularly as dictated by a predatory sexual overdrive that helped solidify the “brute” stereotype. This attitude, which cast blacks as naturally inclined towards violence, festered for hundreds of years. The pervasive sense of racial disgust and hatred towards blackness so infested the collective white psyche that white culture effectively embarked on its own demise. The noxious racial ideology would continue to affect future generations for centuries, lingering on into the Jim Crow era, when fear and suspicion of blackness and black bodies hit many troubling crescendos like public lynching and segregation laws.

With that history in mind, it’s no great leap to where we are today. Why aren’t we talking about white America’s unchecked—and deadly—traumatic baggage? My own research into traumatic stress and memory has taken many forms over the years, including studying dozens of texts, articles, clinical studies and interviews, as well as performing auto-ethnographies of my own experience with Post-Traumatic Stress Disorder. Through this research, I have come to understand that our own fears and anxieties can sometimes be transmitted to others. As was most eloquently noted by physician and trauma theorist Dr. Judith Herman in her groundbreaking 1992 text, Trauma and Recovery: The Aftermath of Violence–from Domestic Abuse to Political Terror, trauma changes nervous system response and regulation and lingers in the body long after the traumatic threat is gone, gnarling itself into our lives. In the extremely powerful affective flows of such trauma, transmission is even possible between generations. That is to say, if something left a deep, traumatic imprint on one’s parents, one may inherit some of those traumatic impressions – trauma, unfortunately, does not just go away. This applies to children of trauma survivors, as well as children of perpetrators—and, significantly, perpetuators—of violence. In the case of white children who become white police officers, who then kill unarmed citizens of color, we have to face the difficult reality that these children absorbed those messages of hate-based fear that people of color are sub-human criminals. Police believe they must overpower people of color first, lest they be overpowered. 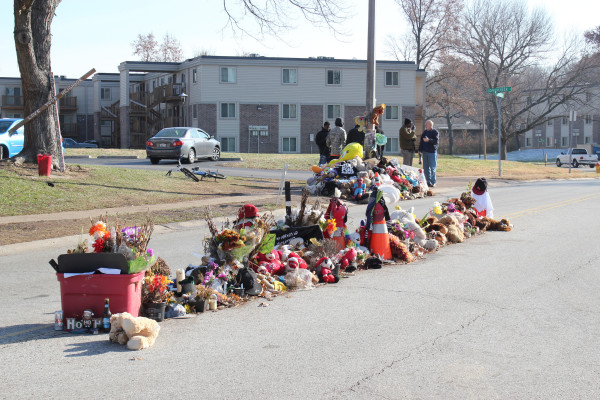 Marianne Hirsch, a prominent writer on cultural memory, has written extensively about a kind of inter-generational transmission of traumatic memory she terms “postmemory.” Postmemory is the idea that the immense stress of a traumatic event is so powerful that its effects, its essence, can imprint on the survivor’s children, almost haunting them. Hirsch’s work offers a possible initial framework for apprehending the notion that trauma is malleable and shifting, making its way from person to person, generation to generation, although she is also careful to delineate the bounds of this theory. Hirsch clarifies that we do not have literal memories of another’s experiences, and that those lived memories cannot themselves be transformed or otherwise projected onto someone else. According to Hirsch, “Postmemory is not identical to memory: it is “post”; but, at the same time, it approximates memory in its affective force and its psychic effects.”[2] In this case, the “affective force” and “psychic effects“ are visceral fear, disgust, and seeing others as less than human.

I would take Hirsch’s concept of postmemory a step further to offer the idea of pre-memory. If postmemory is a possible outcome of a parent’s real, lived experience, then we might think of pre-memory as a possible outcome of efforts by parents (and by others in the social environment) efforts to inundate children with horrifying ideas of racial otherness. The child grows up afraid, but an actual traumatic interaction between the parent and a real person of color was never had. Likewise, the child never lives through any such trauma with a real person of color. The child has an indelible affective imprint of generations of a mythology that stems from a collective hatred. It is a psychological toxin with devastating physiological outcomes.

Like postmemory, pre-memory might exist as a traumatic impression that “approximates memory in its affective force,” but unlike postmemory, traumatic pre-memory might emerge from repetitive, culturally pervasive, and traumatizing ideas passed through generations (versus first-hand traumatic experiences that happen to a body). Pre-memory is similar to the outcomes of a 2015 study at New York’s Mount Sinai Hospital that proved that a person’s traumatic life experience can alter the genes of their children (in the form of increased likelihood of stress disorders), but complicates it in that once again, we are considering the impact of words, ideas, and impressions that infuse the social climate, rather than a direct and embodied experience that a parent survived. By repeatedly weaving “It’s us versus them,” into the social environment, ideologies of racist disgust, hatred, and, perhaps most importantly, fear, have been incorporated into the epigenetic landscape, the result of which has been a legacy of hyper-vigilant “defensive” attacks by police. That is to say, if generations of children have grown up terrified of and wanting to annihilate people they have been taught to fear and devalue, the repetitive stress of that fear could imprint upon their genes. In the case of the policing crisis, this is not “a few bad apples,” but rather a much more deeply rooted cultural epidemic. 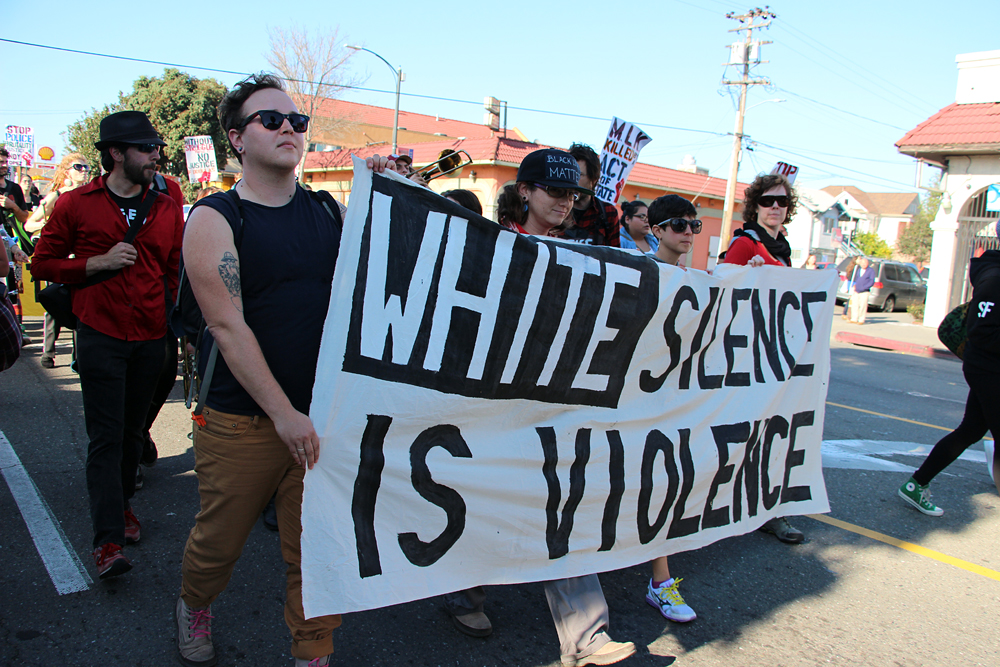 We are responsible for spending the time to examine how this impactful phenomenon has proven deadly. As Erica Garner, Eric Garner’s daughter, urges us not to ever forget the unbearable fate her father met at the hands of police, as Laquan McDonald and Quintonio LeGrier become household names because of the ignoble end to their too-young lives, the work we need to do has never been clearer. If indeed this deeply entrenched racism is a kind of traumatic cultural pathology, then the same rules apply as with any other serious mental, emotional health issue: we need help.

To not be able to trust in those tasked with your protection is something I grew up experiencing firsthand. Slowly losing his mind and wasting a way in a dying body, my father committed terrible abuses against our whole family. Instead of keeping us safe, he routinely put us in grave danger. He died many years ago, but I still struggle to understand his abusive mentality. A similar deficit in understanding is present on a cultural level as Americans grapple with police violence that just doesn’t make sense. It would be impossible to list every instance of this violence; the cultural wounding is deep and in desperate need of repair. That sense of restorative healing and justice will only come with an intense examination of how it is we got to this place of searing, murderous reactivity. I urge white America—serving as police or not—to start healing its own treacherous wounds of deeply embedded racism. Get yourselves to therapy, or religious retreats, or whatever else might help you heal. The country has had enough of the collective white pathology. We cannot wait any longer to address it.

[1] Andrew S. Curran, “Sameness and Science” in The Anatomy of Blackness: Science & Slavery in an Age of Enlightenment, (Baltimore: Johns Hopkins University Press, 2011), 113-14.

[2] Marianne Hirsch, “Familial Postmemories and Beyond,” in The Generation of Postmemory: Writing and Visual Culture After the Holocaust, (New York: Columbia University Press, 2012), 31.

Other sources not cited in text: