The face, Emmanuel Lévinas has noted, is central to the ethical responsibility we owe each other—specifically the face’s nakedness and resulting vulnerability. It is “exposed,” Lévinas writes, “menaced, as if inviting us to an act of violence;” and simultaneously “the face is what forbids us to kill.” If the living face, the physical fact of its sheer openness, is a command against violence, whether obeyed or ignored, what command does the mediated face issue? What does it mean to do violence against vibrating electrons and colored light, a face flattened out against the screen, yet shaped by pathos? Postface, a video work by Frédéric Moffet, explores precisely this issue. Its writhing surface asks the viewer to consider the emotional and aesthetic impact created by the face as its representation is reduced to a series of technological spasms. Postface not only accentuates deterioration, it deliberately produces it through an act of performative dubbing. Essentially, the videotape has been copied and re-copied to the point that the materiality of the medium, the analog tape itself, ruptures in unpredictable and somewhat violent ways. The American movie actor Montgomery Clift, Moffet’s appropriated star, is a pointed subject given that in 1956 Clift’s face was left partially paralyzed after an auto accident. And although Clift continued to have a career after the crash, emotional suffering and psychic trauma haunted him. Postface enacts Clift’s anguish through and against videotape’s material instability, in its disfigurations and distortions. We see the menaced face; feel the debasement of its vulnerability, and empathy is invoked.

But there is more to Postface than merely invoking compassion; it is also a comment on film making in general. What is at stake for cinema and its viewers? Why focus on the moment of disturbance? The disruption of Clift’s face is also the disruption of the apparatus, in the sense that as the media breaks down it compels the viewer to consider the mode of production. But more radically, the cinematic experience has been connected to the creation of self, to the fabrication of a matching spectatorial body imagined in relation to the picture’s illusory coherence. Regarding this, Jean-Louis Baudry writes, “Both specular tranquility and the assurance of one’s own identity collapse simultaneously with the revealing of the mechanism…” For Baudry two effects are at work in the cinematic experience and the apparatus. 1) An ideological effect, a perpetuation of normative power structures, comes about as a result of the apparatus functioning unnoticed. The seats are comfortable, the screen is smooth, and the images are uninterrupted. The mode of production never enters the mind as the viewer is carried away on an uncritical dreamlike cloud of experience. 2) A knowledge effect, on the other hand, emerges precisely when attention is drawn to the apparatus, to the way that the images were put together or in this case torn apart. Certainly Postface’s elevating of the rupture of the image, the glitch, draws such attention. But what do we know exactly after seeing Clift’s fragmented face leaping back and forth across the screen, after seeing his chin sliced and jutting one second then back in place the next? As Baudry suggests, by focusing on the ways that the apparatus has failed, Postface ostensibly disrupts the hallucination of a fictional and homogeneous spectator. It calls into question the viewer’s unchallenged sense of self. Essentially, breaking the cinematic surface in such a way amounts to a form of criticality.

Reimagining the behaviors associated with the Video Home System through Roland Barthes’s formulation of reader agency constitutes an important logic. Postface could not be possible without the technology of the Video Home System. Such a comparison would also constitute an important extension of how Postface creates certain kinds of knowledge effects. For Barthes reading is not defined by responsibility to a text’s integrity, rather “our very avidity for knowledge impels us to skim or to skip certain passages.” Readers openly violate the continuous world of the text. In fact, the very materiality of production, the way the pages open to any point whatsoever, encourage this type of approach. “I read on, I skip, I look up, I dip in again.” Historically, Video Home Systems presented a similar range of motions, exposing closed cinematic and broadcast media to prolonged and even performative review. With the Video Home System something like a user, as opposed to a spectator, can be discussed. Once the scene can be played, paused, rewound, forwarded, these acts, contingent as they are on a person, take precedence. They become primary features of the viewer’s pleasure as opposed to instrumentalized peripheries. They bestow a new and powerful sense of agency on the mere spectator. The VHS user is no longer forced to experience the film in any predetermined order. In fact, she operates the film as much as she watches it. One does not only pause the video in order to leave the viewing experience, but also to still the moving image, to prolong looking. One does not only rewind the tape to recover some missed dialogue, but in order to see and hear what was already seen and heard over and over again. Why force the picture to move in slow motion, except to ensure every buzzing pin of light, every micro-expression and feeble gesture is thoroughly consumed. Such acts are not supplementary, but have come to define what it means to watch representations moving across the screen.

These modes of intervention put certain kinds of media at the viewer’s mercy in very physical ways, a fact that Postface is built upon. As such, Postface is about Clift, but also about this special kind of media interaction and its very specific effects, particularly the effects of duplicating and reduplicating video, of dragging the tape across the play-head of one machine after another. It is fitting that this hyperactive and performative mode of consumption, motivated by the desire to both share and prolong viewing, would end up breaking the media. The videotext is destroyed through the very acts it was made for, watching, re-watching, and sharing. In Postface the artifact of obsessive looking—the visual glitch—transcends its artifactness, and becomes the art and the fact. Viewing and copying are stretched to a limit that is simultaneously an act of devotion and annihilation, resulting in an always-emerging state of disintegration. 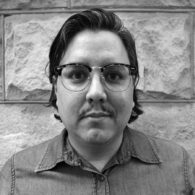