The Internet is Trying to Make You Cry

Writing, for me, has always been an emotionally charged experience, the ebbs and flows of language serving as a kind of barometer of my internal affective reality. It is a release, a catharsis that connects some deeply-held part of myself out into the world. I know my audience responds to it, and as the producer, I know it likewise mobilizes something in me, creating a momentum that is further propelled by the reaction it generates. I am thusly fascinated with any instance of what I sometimes think of as “the dump”—that is, when creative work has the effect of dumping a whole bunch of affective energy onto its audience. The audience, of course, can, and ideally will, dump back, creating reciprocal energy loops between maker and spectator.

Explorations into how emotional response is formed, manipulated, and released are nothing new. From Aristotle’s notions of how to construct the perfect drama for viewers’ maximum emotional response (he referred to this as a kind of “purgation”), to Sigmund Freud’s “talking cure,” to contemporary constructions of traumatic loss (like the widely circulated and repetitive imagery of 9/11), notions of cathartic release have provided a foundation for how audiences, as engaged respondents, understand and relate to concepts of high emotional intensity.

In documenting “the dump” as evidence of the emotional culture that I’ve been exploring here on Dilettante Army, I have been tracking work in mainstream media that touts emotional potency as its core value, specifically claiming that it will make audiences cry or is otherwise heartrending. This kind of emotional charge should not be discounted, no matter the form it inspires—in this case, cloyingly sweet internet detritus. We tend to dismiss both emotional reaction and seemingly featherweight popular culture as things that lack scrupulous rigor and intellectual depth. That one frequently spawns the other is at the crux of my impetus for exploring them equally.

This list is purposefully loaded with junky, simplistic examples from popular culture, predictable in their script and narrative arc. They range from music videos, to commentary about music videos, to homemade slideshows about a deceased family pet who gained internet fame before his demise. How can things so light, frothy, and directive actually explore our deepest, most innate critical, emotional, and reflective sensibilities?

Separately, these are laughable ads and articles that might seem like little more than clickbait. In conjunction, however, a picture emerges of the unique emotional topography of American popular culture, a rich language of mass media perfect for the viral age. The headlines dare us to read or watch items that are guaranteed to bring us to tears. Their viral status begs the question: why do we love to cry so much?

When it comes to catharsis, some people like comedy. I like to cry. Scientific research indicates there are many health benefits, both physical and mental, to crying. It’s why most people literally feel better after crying. Crying can be extremely productive, but boundless tears are associated with severe depression, and sufferers require urgent care. Being unable to cry is yet more distressing, and can be caused by traumatic brain injury as well as major mental health challenges.

In light of recent events like the bitter tragedy and pandemonium still unfolding in Ferguson, the mounting terror and loss in Israel, Palestine, Syria, and Iraq, and the chaotic Ebola outbreak in West Africa, it’s hard to deny that we live in times fraught with emotional intensity. However, the items listed here are successful and merited partly because of their contrast to the unfathomable horror of real news headlines. We need some way to clear space in our minds so that we can process important information that may, for example, implore us to have an empathetic response to violence and suffering around the world.

Is watching two teenaged girls with the same congenital birth defect meet for the first time – and then tearing up as they engage in a heartfelt embrace – really so bad? You be the judge. I personally lose it when one gently whispers to the other, “You’re so beautiful.” 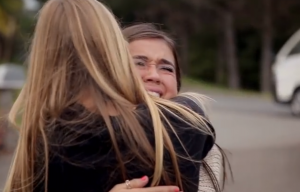 Did you know that a commercial for Skype could make you cry like a baby?

It goes like this: two girls are born with the same birth defect. They are beautiful, lively, average teenage girls bonded by the experience of living without both hands. They are best friends, but…they’ve never met! They actually live in different corners of the world, and their entire relationship has taken place via Skype. So, a meeting is arranged. As anyone who has ever had an internet best friend knows, the bond is real and true and visceral. We get to watch as their eyes meet for the first time and affective alchemy ensues, their expressions transformed into that purest display of love and gratitude only possible with someone who has seen you through your deepest losses.Yeah, I’m sure Skype was stoked when they heard about this story and knew they could make a great commercial for their product. Whatever, still crying. 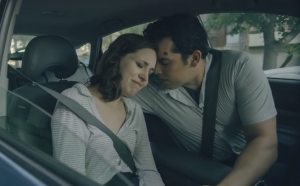 John Legend wants to make you cry in new video

As you may be aware, there’s been a recent uptick in “body positive” ads and videos. I do not wish to get into the debate about whether or not this video for “You & I (Nobody in the World)” is truly communicating a message of body love, except to say it has all the tropes. The narrative (or “message” if you’re feeling generous) of the song or video isn’t what chokes me up. It’s actually the little twinges of hurt in his voice that alternate with moments of soaring pride as he sings. Even if I think his “message” is a bit too overwrought, his analysis of women’s experiences too simplified, I can still appreciate someone who expresses a range of emotion towards their partner. That hauntingly crisp guitar with its faint edge of reverb adds to the confessional vibe of the song, too. 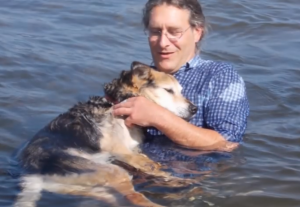 Schoep and John Unger video will tear your heart to pieces

John Unger was, several years ago, the human half of the viral photo of a man cradling an old, arthritic dog in the water to soothe its chronic pain. The dog was Schoep, Unger’s beloved comrade of over 20 years. The photo, and subsequent Facebook presence, inspired such heartfelt responses from viewers that upon hearing of Schoep’s passing, one was compelled to create the tribute. This one isn’t so much about crying, necessarily, as it is about the production of empathy—I find it difficult to watch this video, replete with cringe-inducing, saccharine platitudes as it is, and not think about what true companionship means. Despite its completely mediocre and predictable format, this video creates an emotionally intense, conflicted space—by looking at images of John and Schoep during their happy, active life together, one can only imagine the profundity of the loss of that bond. 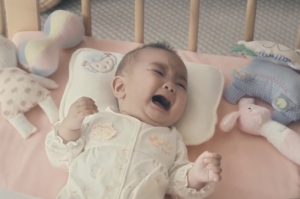 Thailand does it again with an ad that will leave you bawling like this baby. Grab some tissues and your phone charger

This one might be my favorite because all the pivotal moments are a consequence of someone looking at and responding to someone else’s affective cues: Dad responds to Baby howling like a little banshee, Mom responds to Dad’s frantic call, Baby laments Mom’s videophonic non-presence even more loudly, Dad responds to Baby’s utter emotional turmoil by reaching out physically, I respond to Dad’s tentative facial expression as he harnesses all his fears and insecurities – ostensibly about being an unfit parent, an unfit man—and lifts Baby into a gentle embrace, Baby and Dad do a kind of eye-deadlock, Dad smiles, Mom watches in awe and sheds a few large, pearly tears, I continue to shed many more. The only other sound is that damn twinkling piano, a tool favored by diabolical advertising executives everywhere for its emotional efficacy. I don’t know about you, but I’m exhausted.

And last but not least… 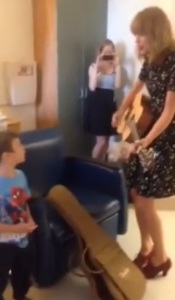 Taylor Swift Visits Young Cancer Patient, Drowns You In Your Own Tears

Say what you want about Taylor Swift (if you read my last post, you know how I feel), she sure seems like a sweet young woman to me. So sweet is Taylor Swift, in fact, that she will brave the hospital room of a squeaky, small, terminally-ill child just to cheer him up for a few minutes. It’s really precious that she is a ten-foot, guitar-wielding Glamazon and he’s just…an excited little boy who is so pumped to recognize the songs she’s playing. Almost makes you forget that his family probably wants nothing more than for him to get to grow up and relate firsthand to a song about “never, ever, ever getting back together.” Based on the Facebook page linked above, it seems like Jordan’s battle continues. Let us cheer him on—perhaps with happy tears—instead of rolling our eyes the next time Taylor Swift enters our periphery.

Understanding that these examples will not be effective or meaningful for everyone in the same way, it is clear nonetheless that a strongly emotional sensibility inhabits and infuses even the most trite moments in our mass culture. These and other demonstrations of emotion within our everyday culture challenge us to be more aware of our own state of being. In turn, we might just have better access to internal tools that help us explore and express connection to our larger world, rather than shrink away from it.