Several weeks ago, Eddie Huang, chef/proprietor of Baohaus and host of VICE’s Huang’s World, came under fire for comments he made during an appearance on Bill Maher’s talk-show, Real Time with Bill Maher. He spoke about the success of ABC’s show, Fresh Off the Boat, which is loosely based off Huang’s 2013 memoir. In the interview, he expresses his disappointment with Hollywood’s portrayal of Asian Americans and goes on to compare the Asian-American experience to the experience of African-American men and women.

While parsing through all the various media attention, I mostly read articles highlighting the backlash that ensued between Huang and the black feminist community after the interview aired. Mia McKenzie of Black Girl Dangerous called Huang out via Twitter, asking him to explain his comments further. The argument devolved to the point where Huang implied that black feminists are “bums.”

Previous to this, I had watched his travel/food show on VICE and taken issue with the blatant misogyny; he and his friends often compare dishes of food to women’s bodies and use raunchy sexual references. When I finally watched the entire interview, I found (surprisingly) that some of what Huang says actually resonated with me. On Real Time, he makes Bill Maher uncomfortable by asking him if he’s ever had an Asian person on his show. He calls out Hollywood for wanting to “tell white stories with yellow faces” and slams dominant white culture for its history of emasculating Asian men. But then things take quite the turn.

He likens the Asian-American male experience to that of black women, saying “Asian men have been emasculated so much we’re basically treated like black women.” He goes on further with the joke, “…so, like, when I’m on OKCupid, nobody wants to talk to me either…”[1]

As someone who knows his previous work, his statements do not surprise me. How do you explain or ask for an explanation from somebody who calls himself the Human Panda and wears faux grills on a regular basis? While wildly inappropriate and offensive, this is exactly what has made him famous. 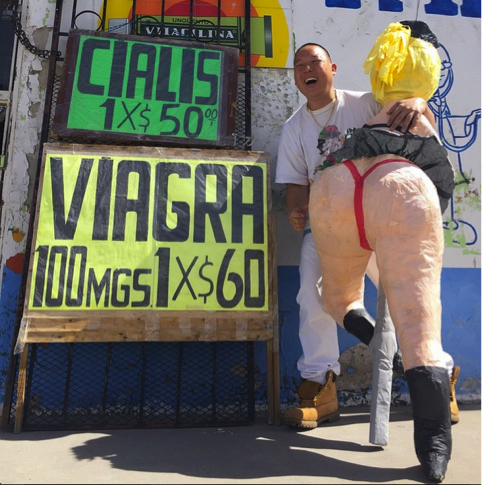 Huang often posts images such as these on his Instagram account, where his consumption of the female image and body are commonplace. Here, he documents his time in Juarez, Mexico for his VICE show, “Huang’s World”. 22 May 2015.

Both his television program and memoir are entitled “Fresh Off the Boat,” a reference to the derogatory term used by American-born Asians to describe first generations of immigrants.[2] In Huang’s use, like his use of everything else, it tows the lines between comedy, self-deprecation, and offense. 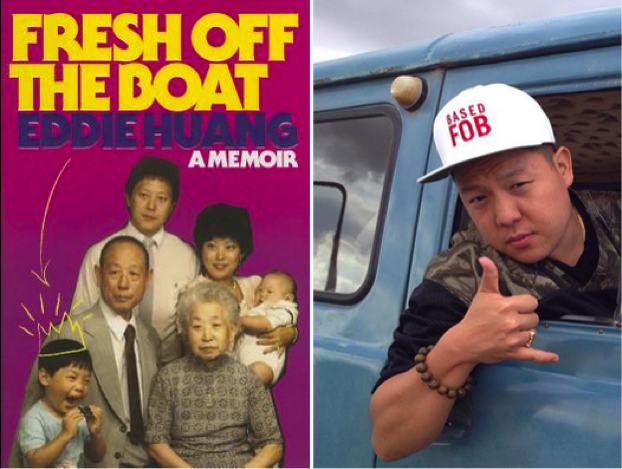 Huang swaths himself in black hip-hop culture while indulging in old-school Asian terms. For example, both his blog description and his self-description during the Bill Maher interview involve five-spice and Oriental rugs. His Twitter profile name is “Rich Homie Huang.” It is interesting to note that other Asian-American chefs like Huang have also mentioned their affinity for hip-hop and how black culture helped them through their rough adolescence in predominately white neighborhoods.[3]

It could be said that the way Huang has latched onto black culture and hip-hop is the same way white culture has, time and time again, appropriated Asian culture. His misuse and blatant disregard for the history and place of hip-hop in black communities is hard to swallow. But, in many ways, Eddie Huang’s fault is also the fault of the culture at large. Could this be because there has been, until now, a great gaping void of Asian-American culture in the media? As a professor at Smith College, Cathy Schlund-Vials, told me in an Intro to Asian American Studies course: American culture functions on a black/white spectrum. There are no shades or variations within this spectrum.

In an essay written by Huang addressing his disappointment with selling the rights of his memoir to ABC, he describes an experience he had with a producer of his show. Huang questions the details of a scene and the producer explains to him that, “we gotta hold the viewer’s hand through this because they’ve never been inside an Asian-American home before.”

So when somebody like Bill Maher thinks it’s alright to ask “Asian questions” to the first Asian guest he’s had, it begs the question: how should that person react? He asks Huang about two minutes into the interview why Asians are referred to as yellow. Maher follows up this question with “who do Chinese people cheat off of when they take a test.” The interview continues with Maher asking Huang questions, creating a very distinct line in the sand between white culture and Asian Americans, using the phrase “tiger mom” at least twice in five minutes. He makes sweeping generalizations and asks Huang about them.

It becomes a game in which Maher, the white man, asking Huang, the Asian expert, what the world is like for him. Before ending the interview, he says to Huang “one more Asian question…” as though Huang speaks for all Asians in the United States. He asks why the term “Oriental” is no longer used. He frames it as such: “I understand why the N-word is horrible but I don’t understand why one day, [Oriental] became an insult.”

Several things about this interaction stand out to me: you can see the Republican pundit, also a guest that day, cracking up at this exchange as Huang laughs it off. But if Maher is asking about the Asian-American experience by comparing it to that of the African-American experience, how is Huang supposed to react other than explain his point of view to the white audience who has never been in an Asian American home before?

This is a telling example of how the white experience is related to the black with nothing in between. Trying to compare the Asian-American experience to the black one, with its history of slavery, emancipation, and civil rights, is clearly not the answer. But how do you describe it to somebody who has no other point of reference?

In the midst of thinking through this situation, I mentioned to my boyfriend that I wanted to write about Huang’s interview. After telling him about the Twitter debacle, he asked me, “what’s your stance on it?” I suppose I don’t have a stance. Just discomfort at what has happened and how our bodies must navigate this complicated world of racial politics. What does it mean to be in our bodies and to feel what we feel but be unable to relate and reconcile that to the outside world?

I do not, in any way, condone what Huang said in his interview or on Twitter. I can barely look at the exchange as I pull quotes to write this piece. From any perspective, his reaction on Twitter was completely inappropriate and belittling to black women and many other minority groups. It makes me uncomfortable and upset. Huang, a person with a large public following, was asked to unpack intricate and problematic statements. It does no one any good when he responds with cutting and derogatory remarks (such as jokingly asking McKenzie out to sushi). This is especially true when the audience of such a show is a white one who has little to no understanding of what it is like to, as McKenzie tweeted, “fight every day to be seen even as human beings.” 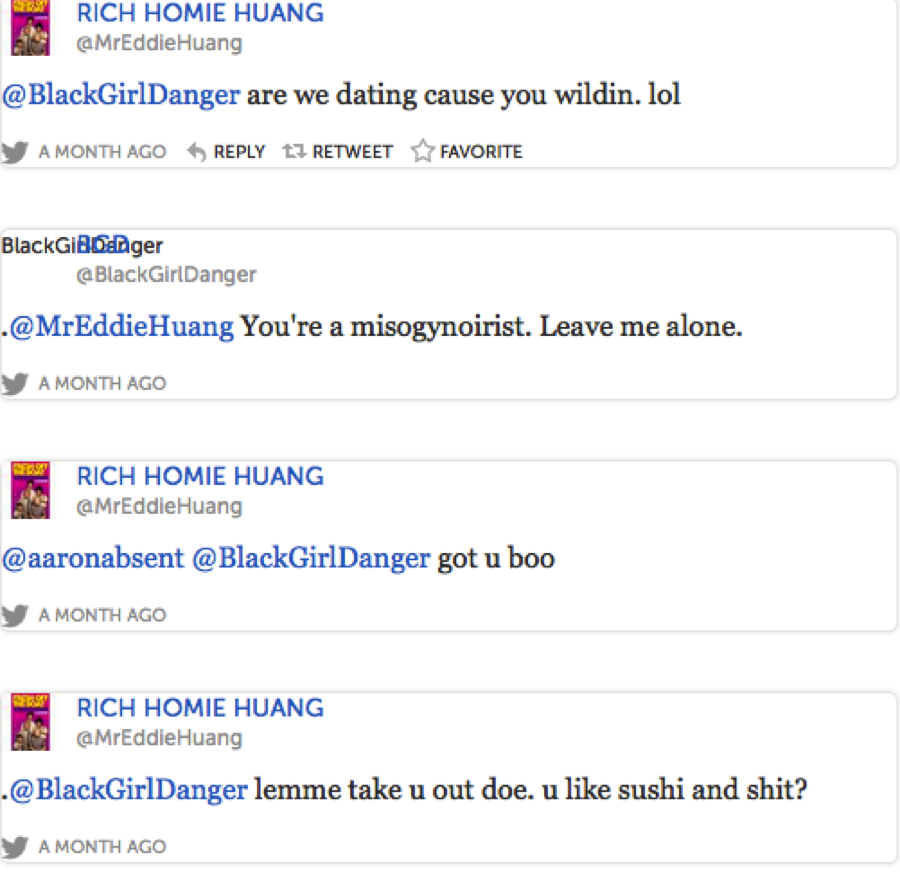 Huang ignores serious questions posed by Black Girl Danger on Twitter by jokingly asking her out to sushi. Documented exchange via Clutch Magazine.

While unsurprised, I am heavily disappointed by Huang’s behavior and statements. To take somebody else’s history and call it your own, to take solace in rap and hip-hop created by black men but then turn and dismiss black women, to press on the fact that they are treated like animals, angers me. In this time when so many black people and people of color are still struggling to walk safely down the street, it is wrong and disheartening to watch.

But it also does no good to write Huang off as a condescending and dismissive misogynist. In a culture that touts masculinity as strength, Huang seems to feel he has no option other than to lash out or be seen as, yet again, an emasculated Asian male. His only concession was that it was live TV.

Huang never apologizes or justifies his actions during the Twitter exchange. Via Clutch Magazine.

It is sad to watch a man flail when asked to confront his own statements, but it’s like the issue itself: there is no black and white. There are only gradients and shades in the really complicated web that is racial relations in the United States. 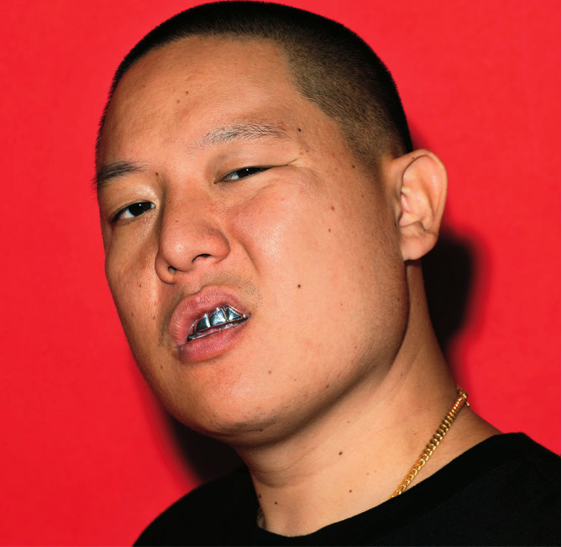 Eddie Huang baring his faux grills. This image was featured heavily in a New York Times article by Wesley Yang where he expresses his disappointment with Hollywood’s depiction of Asian America. 3 Feb 2015. Photo by Nathaniel Turner for the New York Times.

[1] When asked by Black Girl Dangerous to defend this statement via Twitter, Huang refers to this article,

[2] Fresh off the boat, aka FOBs, are immigrants who are, for lack of a better term, “hicks,” failing to assimilate to the host country’s culture. This term has lately been embraced to describe behaviors and difference.

[3] Chef Roy Choi who is best known for his Korean taco trucks, Kogi, in LA published a memoir entitled “L.A. Son: My Life, My City, My Food” where he discusses his relationship to hip-hop and black culture. He emphasizes its importance to his world view as an adolescent and cultural upbringing as an Asian American male in the white suburbs of LA.