Getting Down: Thanksgiving in the Little Space

“We hear ‘why do the black kids sit together in the cafeteria,’ instead of ‘why do our institutions routinely uphold the privileges of whiteness?’ There is little space in popular discourse for an examination of what goes on outside the realm of white America among people of color.”

“As for the rest of this thing we call America, I get down once a year. Thanksgiving. That’s my day as an American and it’s enough. Fuck countries and boundaries; you can call me international.”

– Eddie Huang, Fresh Off the Boat 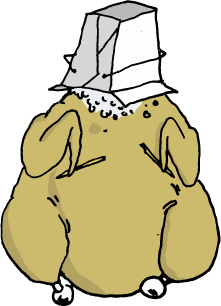 Thanksgiving Memory I: My mother and I going to the grocery store late one evening. I was shocked as she put things like canned cream-of-mushroom soup and frozen green beans in the cart. I knew she’d lost her mind when we began a search for something called French’s Onions. Having vegetarian Chinese parents basically means I’d never seen onions in a can, much less fried and breaded ones. The next morning, I woke up to all these seemingly exotic items in the form of a casserole cooling on the counter. I begged my mom to try it. She said no, it was for her work’s Thanksgiving potluck, so I asked her to make one for us. She begrudgingly let me try one of the “crispy” fried onions from the can (I was deeply disappointed with how soggy it was) but she wouldn’t make one for us because it was “not something we eat.” This was probably the first time I became aware of a line drawn to delineate and highlight cultural difference via foodstuffs. Or maybe I’m just sore that I wasn’t allowed green bean casserole. Either way, this moment has stuck with me.

Eddie Huang, proprietor of the New York restaurant Baohaus and television food personality, recently wrote a memoir, Fresh Off the Boat. He dedicates most of his book to describing what it was like growing up Chinese/Taiwanese in Orlando and his rise to fame selling Taiwanese-style pork buns in New York.

In one particular chapter, he discusses what Thanksgiving was like in his family. The similarities to my own Thanksgiving memories are uncanny. He writes about his first encounter with green bean casserole at his friend’s Thanksgiving dinner. He waxes on for multiple pages about it, explaining: “I’d never had green bean casserole so it was a revelation.”[2] So taken with the dish, he brings a plate home to his mother. He presents her with it, saying “Mom, look it’s Thanksgiving.”[3] She refuses to try it and remains unimpressed with American food. This is, apparently, the norm in his household. He observes, “Whenever I brought home American artifacts to share with my mom, she’d shut me down.”[4] He also includes a description of his family’s take on Thanksgiving. He writes:

At our house we would just eat hot pot or some strange spread of sautéed Chinese items, cranberry sauce, sweet potato casserole from Boston Market, and sushi from Publix ‘cause I guess it really made the table pop.[5]

Thanksgiving Memory II: my father, brother, and me driving to multiple Thanksgivings. At the time, my mother worked for a company based in Hong Kong. The executives there probably didn’t care about Americans and their “Turkey Day,” and my mother had proved herself vital to her employers by speaking both Cantonese and English fluently (with no discernable accent in either language). These two facts together meant that she must’ve been working. Since we had no definitive plans, my father’s friends invited us to all of their events. I remember him driving us all over Houston, stopping at each house we’d been invited to.

My father’s friends were first-generation Chinese so there was not a crispy fried onion to be found at any of these homes. There were, however, kids running around while men and women drank tea and played Mah-jongg. I can’t recall much else other than my brother insisting on, but not following through with, how much he was going to eat. I also remember being vaguely disappointed when there was no turkey but always, always, a dish of fried rice at each stop. Looking back, I wonder how I could possibly be disappointed by these Thanksgivings. The tables set with delicious plates of fried rice and braised meats next to the store-bought pies or fried chicken from KFC seemed odd at the time. This wasn’t representative of the Thanksgiving tables I had seen in popular culture, in these American ideals of what people have for Thanksgiving.

Returning to Prashad’s little space within popular discourse, we see it is a creative space without boundaries, where a braised oxtail can sit next to a store-bought pumpkin pie. Prashad goes further when he asks, “Do cultures have a history or are they static? Who defines the boundaries of culture or allows for change? Do cultures leak into each other?”[6] In the mind of my ten-year-old self, Thanksgiving was a holiday that was supposed to look like a Norman Rockwell painting. I had created a static image where I objectified Thanksgiving as Huang did, hung up on the American artifacts rather than really examining the ways my family celebrated or honored different days of the year.

As Huang succinctly puts it, “I fux with Diasporic Thanksgiving and consider it more American than duck sauce” although like me, he admits that he often “felt left out of the American experience.”[7] What goes on outside the realm of white America cannot be seen if we continually uphold the privilege of a holiday that is itself based on the betrayal of the indigenous population of the Americas. Thanksgiving is the mark by which America elides all other ethnicities. It is a holiday that supposedly celebrates togetherness and the merging of cultures culminating in sharing a table and breaking bread while giving thanks for this union.

Yet, Thanksgiving has become synonymous with a very specific menu. It isn’t Thanksgiving without a turkey, cranberry sauce, and pie. Diasporic Thanksgiving changes this. What Huang once felt left out of becomes meaningful to him when he decides to take a seat at the table, embracing the green bean casserole along with the fried rice. Cooking his way and on his own terms, Huang decides to go all-in: “Thanksgiving is my favorite American holiday because it was the first one I felt like a full participant in. I earned my way in.”[8]

My family, Huang’s family, and so many other families are creating their own Thanksgiving images. We are allowing an American holiday to leak into their culture and celebrations while pushing back in the form of mah-jongg, fried rice, and braised chicken feet. Accepting this change and examining it, telling and re-telling, is a way to upend rather than uphold these institutions of whiteness. I suppose this was the lesson that was sitting right under my nose, as I covetously looked down at that foreign green bean casserole sitting on our kitchen counter. There is no perfect or right way to celebrate. Let us open the little space, create a wide expanse, and like Huang says, just “get down.”

Last Thanksgiving: I desperately wanted to create a “traditional” Thanksgiving for my partner and me despite being hundred of miles away from any family or friends. Seven months pregnant and high on hormones, I got it in my head that we should—no, needed—to have a “real” Thanksgiving for the sake of our unborn child. I insisted my partner drive me to the local farmer’s market in the pouring rain to pick up pumpkins for the pie. I went to the store the day before Thanksgiving, elbowing old people shuffling with their carts to gather last minute items. Unfortunately, I knew a turkey wouldn’t fit in the tiny oven of our tiny condo. Chickens were on sale since nobody was giving them much attention; I bought one and figured, close enough. I made a ridiculous amount of food we couldn’t finish. With the leftovers, I made fried rice.

The holiday season is barreling around the corner and it’ll be our first as a family. I ask myself: what story do I want to tell my daughter about Thanksgiving? Or rather, what story will she be telling about her Thanksgivings growing up? I can only hope it will be a story where there is such a thing as “Diasporic Thanksgiving,” there was never football on the television, and there was always a plate of fried rice. I know one thing, though: there will be no green bean casserole.

Adapted from my father’s recipe that used to include SPAM (only when my mom was working).

This recipe mimics the fried rice I saw growing up. Fried rice should be almost white, not dark brown, flavored with wok hay and not soy sauce. Wok hay is Cantonese for flavor coming from a high heat in a wok, not necessarily a flavor like salty or sweet. More like smoky or savory. My dad always let me scramble the egg to put in the hot pan, but the timing for cooking the egg is up for debate. My mother took a Chinese cooking class in Hong Kong where the instructor explained that you add the egg last and make sure to stir, stir, stir so every grain of rice is golden with egg. I know most places in the States add the egg first so there are pieces tossed in with rice. This is up to personal preference and, I suppose, yet another way cultures leak. I like to add the eggs last, not necessarily for anything but the idea of making every grain golden.

2 links lap cheong (Chinese sausage) or a handful of leftover meat or a can of SPAM, diced

2 cups of veggies of choice, diced (I like peas, carrots, scallions, and whatever else I have in the fridge)

Salt and pepper, to taste

Coat a wok or heavy-bottomed skillet with the neutral cooking oil and warm on medium heat. When the oil is hot, add and sauté the garlic and onion until onion is translucent. Add the meat and veggies and sauté until cooked through. Raise the heat to high and add the rice, stirring well until the rice picks up a bit of color and separates a bit. Then, pour the lightly-beaten eggs into the pan, tossing and turning the mixture until the egg coats the grains of rice and everything is cooked through. Add the salt and pepper or a little soy sauce to your liking and serve.