In The Tower of London, all five of King Henry V’s suits of chain-mail and plated steel glisten under glass display cases. I drift between them, admiring the engraved breastplates and curlicue pauldrons, the heavy grieves and gauntlets balled into fists. The sets of armor grow stouter and more ornate as I pass through the exhibit and I notice the codpieces have grown, too, transforming from a small bulge into a bulbous monument. My mother chuckles at the sight of them.

I was twenty-one years old, and I hadn’t owned a suit that fit me since my bar mitzvah. An emergency suit languished in my closet, a quick purchase bought for my grandfather’s funeral. It is a black, polyester shroud of a thing. The buttonholes are fake, the pants comically voluminous. It was the last thing I should have been thinking about on that overstuffed funeral parlor couch.

Why did I need a suit? My college graduation was approaching, though Iowa’s Mays are usually so hot that only the most committed seniors bother. That bright morning, I saw guys wear flip-flops with their gowns or nothing at all underneath. I hadn’t been invited to a wedding, or New Year’s Eve party, or black tie reception. The vague idea of interviewing for jobs loomed in the distance of September, and I told myself a suit might be required. Maybe I just wanted to be Don Draper, though in my heart of hearts, I know I am a Pete.

Sean Connery in From Russia With Love. Marcello Mastroianni in La Dolce Vita. Carry Grant in just about everything. My girlfriend and I are watching Peewee Herman’s Christmas Special when I announce that I want a suit just like his. “You want to look like a little boy?” she asks.

In the children’s section at Ralph Lauren, I pushed aside sweatshirts emblazoned with neon skateboard graphics and cargo pants with elastic waistbands. Next to the navy blazers with fake silk squares sewn into their breast-pockets, I found a boys 16 in medium gray. In the dressing room, I rested the matching pants on a stack of giant wooden cubes printed with different letters of the alphabet in primary colors. The length was right, but the jacket was cut like a square, the lapels strangely angled and high. The price plus the cost of tailoring was too expensive, and I would have had to cut out all the tags reading “Boys.” I parted the dressing room curtain and the saleswoman dressed in a faux-equestrian getup with riding pants and elbow patches looked hopeful. I shook my head.

For a person my size, buying off the rack is a somewhat doomed enterprise–the perfect suit as holy grail. For those unfamiliar with the world of tiny men’s suits, most American companies go down to a 36-short, which means the chest measures 36 inches, but the lengths of the sleeves and jacket have been hiked up. European brands can come in as low as a size 44, which doesn’t seem to refer to any metrical unit, and which usually translates to a chest of about 34 1/2 inches. The salesmen always cringe when they see the shoulders, which give me the air of a very short swimmer or a foppish triangle. I begin to wonder if the suit needs to fit me, or if I should somehow try to fit the suit, my body swelling and shrinking where appropriate. I tell the guy at Suit Supply, “I could start lifting weights, maybe.”

What is the difference between a fop and a dandy? In an 1888 bet against John “Bet a Million” Gates, Evander Berry Wall managed to tear through forty different immaculate outfits over the course of one day at the Saratoga Springs races. Rumored to own over five-hundred pairs of trousers and five-thousand neckties, he was later kicked off a dance floor for wearing the first dinner jacket this side of the Atlantic. He also went bankrupt in 1899 and left for Paris in 1912, exclaiming, “New York has become fit only for businessmen.” He was called the Prodigal Prince and King of Dudes.

The obvious solution to my suit problem would have been to order made to measure or “bespoke.” This is exactly what I attempted two years ago in preparation for my little brother’s bar mitzvah, when I punched in my numbers on the Taylor 4 Less website, (whose name should have been enough to dissuade me). I had wanted to try Indochino, but my father insisted we go with the cheaper option, so now I was attempting to figure out the width of my back from pit to pit with a piece of twine, which I would then lay out on a table next to a ruler. The results were disastrous. When I cut open a cardboard box marked “Taylor 4 Less” and unwrapped my suit four weeks later, I found a garment so warped and shrunken, I assumed there had been some sort of mix-up at their Shanghai factory. The sleeves fell just past my elbows, and the crotch was tight enough to convince me I was wearing a wool gaberdine thong. I then entered into a lengthy conflict with their customer service department via email because they listed no phone-number, ultimately giving up and attempting to cancel the charge with my credit card company only to find out I’d just passed their statute of limitations. My parents call it the “Mini-me” suit after Dr. Evil’s tiny clone, and even a year later, it dangles from a hanger in the back of my closet at their house in Boston. I dread having to put away my coat when I come to visit, where I know it still hangs like a thief strung up in the town square.

My father likes to wistfully recall the times he’d go for a fitting when he was young and did not have to spend money on children: crisp men brought him dry champagne or a neat scotch while he sat in a leather club chair. Salesmen appeared with various selections draped over each arm. Would the gentleman prefer to see the striped navy? I tell him that my barbershop in Greenpoint has a cooler full of free PBR. They taste like cans of cold pasta water.

It is this same man, who would come to put the kibosh on my suit scheme. He told me that I should not spend my money so frivolously, that my earnings from this semester should go towards things like graduate school application fees and utility bills. He used word “responsibility.” I felt like Prince Hal when he’s still spending his days drinking with Falstaff.

So, when this loose behavior I throw off

And pay the debt I never promised,

By how much better than my word I am,

By so much shall I falsify men’s hopes;

My reformation, glittering o’er my fault,

Than that which hath no foil to set it off.

The internet is a place where desire can spread out like water spilled on a glass table. I follow links on links on links. I check prices, blogs, desolate forums abandoned years ago. I scroll through pages of Mr. Porter, drooling over succulent Burberry’s. They are like ghosts floating in midair, inflated by invisible flesh. No dapper young man stands between me and my suit, its jacket open, sleeves inviting me to slide my arms into its warm embrace. The suit is a beautiful wool cocoon. A warm bed, a soft caress.

A few months ago, I won a writing contest, and with my extra money, bought a discounted suit at Brooks Brothers. It’s a very simple, plain navy four-season piece, “the kind of garment,” my friend, Fancy Ethan, says, “every man should have in his wardrobe.” Ethan is the kind of guy who wore cravats to class for no reason and went through a phase during my junior year when he drank only champagne cocktails.

In the fitting room, a stooped Italian tailor marked my suit with a piece of chalk. In burst a young Winklevoss look-a-like on his lunch break, who very politely cut in front of me and demanded the full attention of a sales associate and the tailor. I loafed in the corner while he stood in the center of the three part mirror, examining the latest changes to his custom charcoal suit. He was tall and muscular and had an incredible mane of thick blonde hair that he pushed out of his face in frustration.

“It’s just, the lapels are too high,” he sighed.

“When I sit down to dinner, I feel like the chest closes up.”

“Si.” The young man bent his arms at a ninety degree angle as if to set them on the edge of a table.

“You see what I mean?” He held his hands limply, like the claws of a T-Rex.

I caught the eyes of the sales associate as she tried to interpret between Mr. Winklevoss and the tailor.

“I’m very sorry for the delay,” she whispered to me.

“It’s fine, I have nowhere else to be right now.” Those words nowhere else to be, should have indicated that I probably didn’t need a suit, since suits are for busy men walking briskly. In that moment, I was tempted to somehow give myself away, to start dropping as much Yiddish into this conversation as possible, to mark myself as an outsider. Was this the man I was making myself into?

The saleswoman took a step back towards Winklevoss and the tailor, who were arguing in pidgin about where the first button should sit. Out of the corner of my mouth I asked her, “Aren’t you supposed to unbutton the jacket when you sit down?”

My father has a certain suit I never see anymore. At the height of my parent’s so-called “Sex and the City Years,” he bought a gray sharkskin for his June wedding. More than thirty years later, he can no longer stuff himself into the shell of a younger man, so it mostly hangs in his enormous wardrobe. I’ve only seen it removed from its plastic sheath a few times, and only once in the last ten years. He laid it out on the bed and removed the cellophane clinging under the arms, handling the jacket as if it were a dried tulip. As a child, I had assumed the suit had been made of actual shark hide, like the mako shark steaks we sometimes grilled on the back patio in August. It seemed the pinnacle of manliness–killing a dangerous predator and turning its skin into your skin–like drinking the blood of a lion or wearing a wolf claw around your neck. But the suit I saw on the bed was just a gray jacket and a pair of pants. When I tilted my head, I noticed its yellows and blues, its light weight, subtle windowpanes. It was pretty, but left me underwhelmed. I had expected it to glow or maybe animate itself and perform a dance, but it just lay stretched out on the bed in the fading autumn light, its threads shinning like the scales of a dead-eyed herring. 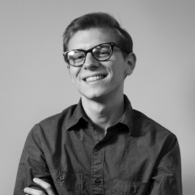