Tupac Shakur appears on the stage at Coachella Music Festival in 2012. He poses the question: “Do You Know What the Fuck This Is?” Sixteen years after he was killed, his hologram offers a question that is still valid. At a moment when visual culture is constantly being re-constructed and re-imagined by a variety of technical means, the postmortem performance has transitioned into reality.

The Tupac hologram is not a new technological innovation in the realm of performative media. In 2009, holographic and 3D developers Square Zero presented Simon Cowell with a singing Frank Sinatra for his birthday party. Before this, Gorillaz blew the mind of millions in 2006 by being the first animated group to perform live at the Grammys. The company responsible for the animation of Gorillaz, Musion Systems, in conjunction with several other collaborators, also created this Tupac hologram.[1] The Tupac hologram was created with additional assistance from Dr. Dre and Snoop Dogg, close friends who were able to identify the social nuances that made Tupac reproducible; the gestures of his hands, his well-known tattoos and the inflections of his voice.[2] It has not been disclosed if the vocal track played at Coachella was, in fact, Tupac himself. Regardless of this intimate authenticity, the Tupac hologram has come across as surprisingly realistic.

The emergence of the Tupac Shakur hologram isn’t to discount any other kind of virtual environments that are currently a part of the contemporary milieu, but rather offering a perspective on the re-embodiment, or rather, the post-body of the dead. What does it mean to produce a virtual body to replace the flesh that is no longer, and to continue an identity beyond its limited life? Like all bodies that exist as living and breathing beings, we cease to be. For some, however, the end of a body isn’t necessarily the end. As seen with these holograms, the body can be re-animated and its moment can continue.

This idea of the re-animation of the dead is especially complicated when placed within a culture that already tiptoes around death. Death is not a condoned topic of discussion, but rather a singular event that is to be privately mourned. We rely on the paid services of others to steward the bodies of our loved ones into their next journey. Embalming, with its lifelike presentation of the corpse, allows for a viewing in which we can imagine the dead simply entering an eternal slumber. These mechanisms already allow us to distance ourselves from the gritty, messy process of dying and imagine that the those who have died are not gone and rotting. In this way, the re-animated body of Tupac performing in 2012 is not the beginning of a death denial epidemic, but rather a stepping stone to a bizarre cultural moment in which a body can be re-animated with technological aid into some kind of virtual continuum. A mass media afterlife can soothe viewers and fans as the performance goes on.

Re-animating the dead has frequently been a genre of spirituality or of horror. But whether it’s the re-incarnation of Jesus or zombies in The Walking Dead, there are few sustained moments of the dead coming back to life outside of some kind of spiritual uprising or postmortem torment. The bodies of the dead return to us in some kind of terror or awakening, an indication that things are not quite right. The body of Tupac, however, did not necessarily stir up any kind of impending doom or spiritual transition. Tupac simply gave a solid performance with Snoop Dogg and Dr. Dre, and a few other big name rappers like Eminem, 50 Cent, Wiz Khalifa, and Warren G.

Hologram-as-performance indicates that technology has begun to transition our bodies in a way we have had yet to experience. Although a decomposing corpse is still an eventual end of our road, virtual representation of our moving bodies can still allow us to continue on in a technologically mediated existence. Tupac cost anywhere from 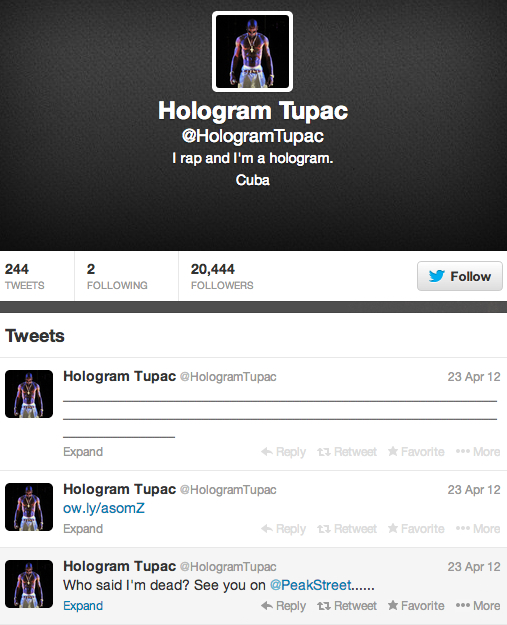 $100,000 – $400,000 to produce, and is certainly not an option for most day-to-day folks in mourning, hoping for some kind of wild re-animation of their parents. The Tupac hologram, however, does present a possible option for money making off the death of celebrities, a moment of longevity that we never thought possible.
The dead-as-living performer allows us to explore what technology can feasibly offer the living. It begs the question: does death have to be the end? Cultural theorist Roland Barthes indicated that technological innovations will always offer mediations on death. With the innovation of photography, Barthes said that, “For Death must be somewhere in a society; if it is no longer (or less intensely) in religion, it must be elsewhere; perhaps in this image which produces Death

while trying to preserve life.[3]” Beyond photography, perhaps the hologram is our next step in animating Death. After all, Tupac-as-hologram, the personification of technology, even has his own Twitter. The Tupac hologram feed at least has the self-awareness to offer the perfect quandary to this equation: “Who said I’m dead?”[4]