When I had just moved to Chicago, I met a man from a CL missed connection named Justin. He was cute enough (well. not really.) and we had missed each other at an opening for a contemporary photography exhibition at the Art Institute (Nan Goldin, Sally Mann, some dudes). He was into art and had a red stripe in his hair. He was into art. Well. He thought he knew EVERYTHING about really really really contemporary art. No. He thought he knew everything about selling contemporary art, and making contemporary art that would sell. He was very serious. One time I forgot the name of Kerry James Marshall and I called him John Kerry Marshall, knowing it was wrong –this must have been very early during the 2008 campaigns I guess. “Oh that’s funny,” he said (literally, he said those words). “I’ll have to tell KJ that next time I see him.” (Does he go by KJ? I’m not sure; maybe I made that up to tell you how insufferable this guy was. He kept telling me how Nobel laureates are disproportionately Jewish, a conversation I really did not want to have.)

I was fresh out of liberal arts school and was working a job as a barista on the Magnificent Mile. I had this really superb idea to make some traditional shino plates with the Louis Vuitton logo in traditional iron stain, and then display them at the coffeeshop to make fun of our customers. “No, no, no,” he said. “Stay away from commercial critique. That’s so over.” 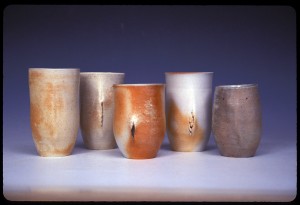 I showed him some of the last pieces I made in school, some small, thin porcelain cups that I had split up the side, then repaired on the interior so that they were still functional. Ignoring the fact that they looked like dangerous vaginas, for me they were moving towards this functional/dysfunctional conversation that I wanted in my work, but didn’t quite know how to express.  A vessel that had had its functionality destroyed, but was still usable. I’m not sure that he understood that I had purposefully split the cups and then repaired them. Like so many douchebag aspiring gallerists, he did not seem to have any idea how clay worked. To him, I had found them split on my shelf, then repaired them because I could not bear to lose them. “Sometimes you just have to let clay be clay,” he astutely told me, as if it was advice that would really change the direction of my work, as familiar as he was with contemporary ceramics or studio pottery or whatever.

I didn’t hear from him for a few days or weeks or whatever. Then he got in touch and invited me to his apartment. He had been deathly ill with some viral pneumonia or something and was still recovering. He was working for an HIV researcher (again one of the best and most famous doctors in the world—impressed yet?), and really thought he had suddenly developed late-stage AIDS without any previous symptoms; it sometimes happens. Anyway, he had also slept with this totally-stuck-on-himself photography MFA I had just met, and who is sort of doing well for himself now. I know because I get his dumb email newsletters full of his self-portraits. Anyway, that’s just to tell you how sick he was and also some snotty gossip.

I’ve been letting clay be clay more lately and it always reminds me of this. Was that bullshit comment actually influential? When I encourage my clay to crack or to warp, when I leave a fold or a stretch mark, do I owe it to this dumbshit? Potters have always been about balancing the clay-ness of clay with its functional purpose. Our midcentury ceramics celebrities pushed more and more into showing clay as clay. Would I have gotten to this same place without “Dustin you idiot, why did you repair that hole, you dumbfuck? You should just let the clay be clay, man.” 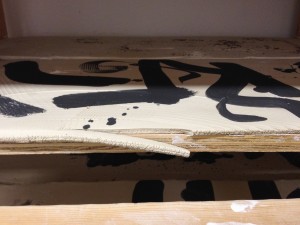 I’ve been working on a tile project this month and had a piece of porcelain laid out to dry before I cut it into squares. A sliver was just hanging over the side of this board and sometime this morning, between 6:30 and about 9:00, that piece decided to separate itself from the rest. Why? It’s a very peculiar crack. Normally I would expect a crack like that to follow a line where two pieces of clay were poorly joined, but this slab was rolled out in one piece. I made a decision to have the clay wrap slightly around the corner of the board, so that when I cut it into a tile, it would retain that mark and be not-quite-flat. I suppose as it dried it had just enough tension to sheer that piece off in a nice clean break. You wouldn’t think clay, losing 2% of its size, would move in that way, would move enough break and break so cleanly, but I guess in this particularly set of circumstances, it did. 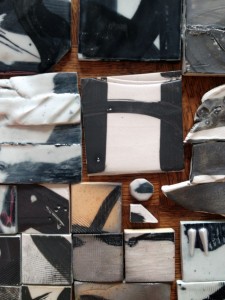 I’m really interested in what mistakes we get to keep in pottery and which are not culturally valued. Which thumbprints show the diligent hand of the maker and which are just sloppy craft? What lumps lend character to a handle, and which are just not-trying-hard-enough? How does one even come to recognize which are which? Anyway, I’ve been trying to accept as many of them as I can, to evaluate the marks and joints and lumps and stretches and woodgrain and hairline cracks. And sometimes they don’t make the cut; I can’t twist my eyes into seeing them as anything other than trying-too-hard. And some I think, “oh I’ll fire that. See what happens” and I can always toss it after the next process. And some are just “oh yeah, that’s so typical of what clay does.” Or “my glaze is going to look great on that mark.” Or “I can fire that and then add stain and it will be so much more interesting. Stop touching it.” I feel, sometimes, this stupid heartstring connection to the things that I make, marked as much by error and sloppiness as by diligence and thoughtful play. They take on a breath of their own, and I spit on their little faces and patch them back together, give them a little hurt and a little personality, a little honesty, a little truth-to-materials, and hope they turn out as damaged but more-or-less OK goods. 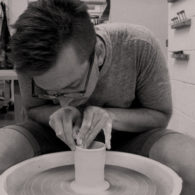