After 22 hours of labor and two ambulance calls later, baby girl Dao-Lyons arrived yesterday just in time for the 6:30 dinner rush (a little too late for happy hour, though)! She was born at home and is 21 in., 6lb 13 oz, and is doing well. 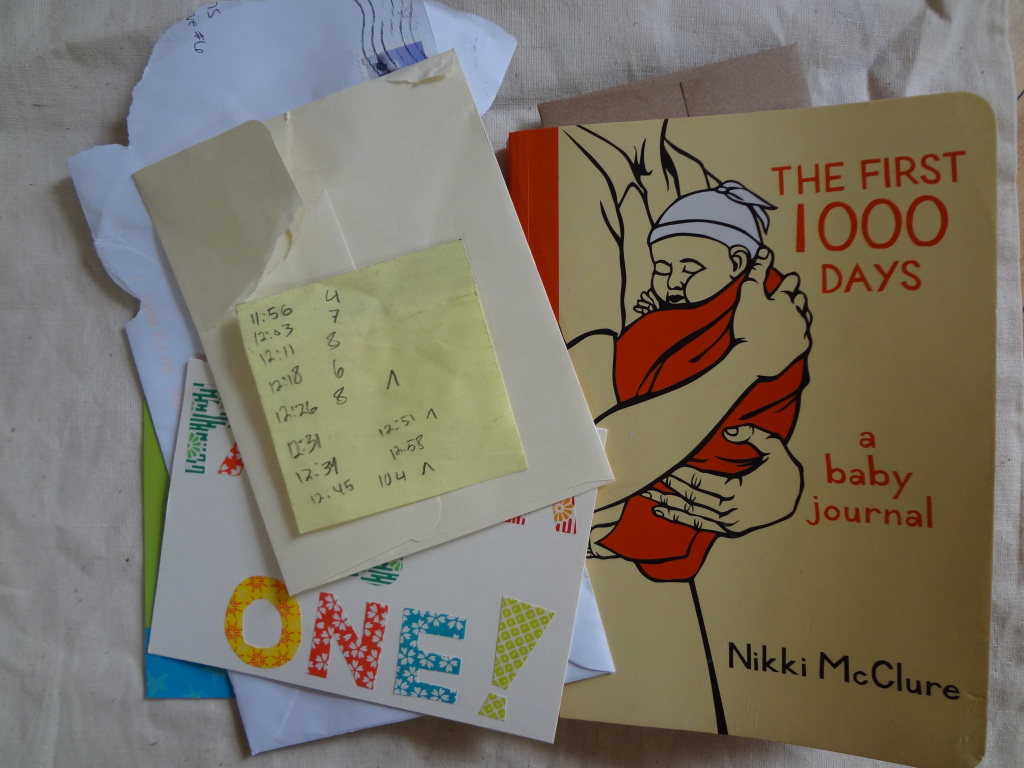 An unsorted pile of the author’s records, including a Post-it used to record the the timing and duration of labor contractions

My daughter turned a year earlier this month. My boyfriend and I survived while keeping another human alive for one whole year.

Often, parents have scrapbooks or loads of photos to show for it. One piece of advice I heard over and over concerned my daughter’s baby book. I received no less than three baby books at our baby shower. Despite the multiple baby books, I can count on one hand how many times I’ve written anything down. People always ask me how it’s coming along, telling me that I better write everything down because I’ll forget. I can’t tell them my current theory, which is: babies are meant to forget this for a reason. The memory of birth and rapid growth are so traumatizing, it should be forgotten.

What hasn’t helped is this particular customer at the restaurant where I work. He is an older man who owns a shop in the neighborhood. He hobbles in several times a week to sit at the bar, have a few drinks, and chat with the staff. When I first returned to work from maternity leave, bleary-eyed and trying to process being away from the baby, he asked me if I had a baby book for her. Perhaps in an effort to encourage me, he brought in his baby book.

It is a beautiful vintage book from the late 1940’s, faded pages with pastel colors, locks of hair, taped hospital bands, photos—everything you would want in a baby book (unlike mine, in which my mother noted that Reagan was in office). His mother had lovingly written down every. little. thing. This book clearly makes him feel important, his existence real and significant to others.

But the pressure of documentation makes me cower. What do I document? How should I document it? What will she want to remember? It is an intimidating task to be the powerful collector of memories, the archiver. Creating this book, this document of her early life, feels strange. I am overcome with the power in it. It overwhelms me; I often just pick up the book, hold it, flip through, and then put the book down.

Every time this man comes in, I dread the question: how is the baby book coming along? One time, I admitted I still hadn’t started it and he asked, “What kind of mother are you”?

Having only been a mother for a few months at the time, I didn’t know. I still don’t know. But in that moment, I certainly felt like a bad one. I wasn’t even sure I liked the baby. How could I write down that I hated those first few weeks? I resented the lack of sleep, wished aloud to my boyfriend that I escape to a hotel room by myself, and thought her little fingers tapping on my breast were creepy. For a while, we (jokingly) called her “the soul-crusher.”

It is only now that I can turn and look back. I often think of Mary Kelly’s Post-Partum Document and her unwavering dedication to documenting her son’s first six years. Post-Partum Document is a record of her relationship to her son and “concentrates on a formative moment in her son’s mastery of language and her own sense of loss, moving between the voices of the mother, child and analytic observer.”1 This movement between the voices of mother, child, and analytic observer is what causes me to stumble and fall. How am I supposed to document my daughter’s early life: from my perspective or hers? Whose memory is it? So instead, I’ve already lost one of my daughter’s years to checking Facebook, eating too much trail mix, and reading lady food blogs.

But maybe I haven’t quite lost it. I spent the year focused on nourishing my daughter. For a while, it felt like all I did and all I would ever do was nourish her, feed her, make her purées, count the ounces of milk left in the freezer. I may have forgotten to write things down, and she can blame me for this when she is in her twenties and blames me for everything. But now, in a belated effort to document, I think back on this year and her entrance into this world—I think of soup.

Soups were present early in my pregnancy when I couldn’t eat anything but Saltines, string cheese, and watery pea soup. When I felt up to cooking again, it was fall and chilly out. I made cabbage soup with rice, vegetable soup with the beans from our farm share, and lentil soups in an effort to eat more protein. I craved warm bowls of comfort and enjoyed the slow cooking. However, it got to a point one night when my boyfriend gently requested I “maybe try something different…something besides soup” when I asked him what he wanted for dinner.

As we inched toward the end of my pregnancy, we began to ready for labor and delivery at home. A part of preparing for a homebirth is making sure you have enough food on hand for your birth team. This task kept me occupied for the better part of my late pregnancy, mostly due to the fact that I went almost two weeks past my due date. Each week I would make large portions of food in case I went into labor. Batches of granola, potpies, and muffins were all devoured with each passing day we waited for baby. I worried about what our birth team would eat when they came. What if they didn’t like what I had made? In hindsight, this is probably the most trivial thing to worry about, given the larger task of bringing a human into the world. But I wanted to make sure I cared and nourished in the same way I was being cared for.

The morning of February 6, signs of early labor presented themselves, and I made a batch of soup. During the night, contractions came and surged. Our midwife came in the middle of the night and I began to measure time through little landmarks. I could hear my midwife call her student assistant. When she arrived, I knew some time had passed.

They were superhuman in their endurance and their support. I don’t know how they did it. I was a brat. I was whiny and I needed somebody with me at all times. Anytime anybody left the room, I asked where she was going. At some point, I heard a spoon clanking against a bowl. I realized somebody must have been eating the granola I had made. In my labor, I remember feeling a sense of satisfaction that somebody was eating food I had made, but I also felt angst and resentment. How could anybody possibly be eating at a time like this? I was in pain and needed attention! All I could handle was a bite of frozen smoothie and half a grape. I wanted granola!

The second midwife came when I began the transition into active labor. I remember my midwife offering the option of the hospital if I wanted it. I would like to say I refused because I believed in my inner feminine power or something like that, but it was the idea of trying to figure out how to get into a car that made me say no. So I continued to huff and puff in our tiny apartment.

At some point, I was laboring in the lap of the midwifery student while my midwife rubbed my back. I turned and saw these three women supporting me. I realized that everything I needed was right there at home — they were all there to support the entrance and beginning of my new family. So maybe it was that inner feminine power thing and not my laziness that stopped me from a hospital transfer. But that feeling, of knowing and support from these capable women, sated me in a way that many writers have waxed on about a certain food experience. It is something important to record but, at the same time, completely indescribable.

In the end, the baby’s heart rate dropped and we had to act fast. The second midwife called the EMT’s, who rushed in as I pushed and baby entered this world fist first, with her right arm above her head. I like to think she was saluting all of us, letting us know her power. It was a surprise when we realized she was a girl but it is no wonder we had a daughter. I have been so blessed to have been informed, fed, and nourished by so many women in my life—strong, brave, independent, and fiercely inspirational women. And what better way to give back to them what they gave me and to nourish them with soup?

That batch of soup I made in early labor is what I ended up having for the birth team. It is also the first meal I ever ate as a mother. Even if I don’t know what kind of mother I am, I will document this meal as I step into my new role as a collector of memories.

During my pregnancy, bored and convinced that “lazy mama means lazy baby”, I walked every day in the middle of winter in Maine. Popping into the local grocer to warm up, I was lucky to find local, nitrate-free sausage ground in-house. Now we just use whatever we can afford.

4 cups of water or stock

a couple handfuls of kale, collards or chard

Heat the olive oil in a large pot over medium heat and sauté the onions until clear. Add the garlic and stir for a minute or two. Remove the sausage from their casings, add to the pot and sauté, breaking up the pieces. Once the sausage has browned, add the sweet potatoes, stir, then add the stock.

Bring this to a boil, add the barley and allow to simmer until the sweet potatoes have softened and the barley is cooked, around 30-40 minutes. Add salt and pepper to taste. When you are ready to eat, throw the handfuls of greens into the pot, stir, and serve. We like it with grated parmesan on top.