The history of Halloween is based on a variety of spiritual and cultural performances: from mediums to masks, weʼve been getting creepy on October 31st for a long time. In the last 75 years, however, this particular festivity has evolved into an explosion of costumes and candy. Weʼve nixed the spiritual when it comes to celebrating Halloween because weʼve also become less engaged with death and mortality. Our modern approach to Halloween is indicative of a larger cultural shift in how we handle death as a society. While itʼs much more fun and a lot less challenging to don a sexy condiment suit or awkward celebrity costume than it is to face our own inevitable ends, Halloween has become a testament to our discomfort with our own mortality.

Halloweenʼs origin has been connected to the pagan festival of Samhain, which may be as old as the first century: the bronze tablets inscribed with the lunar-based Celtic Coligny calendar can be dated to this era but it is unclear whether Samhain begun at this exact time.1 The Coligny calendar does show, however, that this seasonal transition was worth noting, and was of importance. Samhain began at sundown on October 31st and lasted through the first of November. This holiday represented the end of the growing season and was marked with sacrificial fires and prayers where the living honored their deceased ancestors. This celebration and ritual blossomed into a large observance of both the living and the dead: harvesting the last of the living crops and preparing for the seasonal death of the earth, slaughtering livestock, and honoring the dead in social gatherings. Children were able to partake by dressing up in costumes and traveling through their community, offering to pray for the dead in exchange for small treats, such as nuts or fruits. This particular day was also the time in which the barrier between the living and the dead was supposed to be the thinnest. A spiritually-heightened evening laid the framework for the creepy vibe that still holds strong today, even if we donʼt share this belief system.

As Christianity began to spread through Celtic Europe, the Church took a look at this morbid, death-involved holiday and thought it might be best if they worked to sweep it under the religious rug. The Christian church decided they ought just to try re-branding it. There is some evidence in the 7th century of a feast being held to commemorate martyrs, but Pope Gregory III opened it up to include all saints in the 8th century: creatively named “All Saints’ Day” or “All Hallows Day,” this observance fell on every November 1st, the same day as Samhain.2 The Christian church gives a shout out to those dead saints who didn’t get a designated feast day of their own. In honoring the dead, the holidays remained somewhat similar to the original Samhain. October 31st became the “Eve of All Saints” or “All Hallowʼs Eve.”

All Saints’ Day, however, was a lot less fun, functional, and celebratory, so it didn’t quite take off like the church had hoped. It was formally celebrating only a very small slice of the dead and didn’t fill any kind of useful purpose (such as marking the end of the harvest). The church tried again in 988 by offering “All Souls’ Day” on the following day, opening up a general day for the commemoration of the common dead when everyone could say prayers for friends, families, and anyone else who had passed.3

Letʼs fast-forward from this very brief history into the American celebration of Halloween. A complicated hybrid of Samhain and Christian-sponsored Samhain replacements, American Halloween wasn’t taken up publicly until the late 19th century. A large influx of immigrants from Ireland and Scotland arrived in the 1840s and 1850s, and they continued to celebrate the evening of October 31st in their new homeland. Written off by the population at large as an ethnic holiday, Halloween was a relatively small happening across the United States during this time. This is made evident in a New York Times note under “General City News” from 1866:

Halloween. – The great Scottish festival of Halloween recurs this evening. It is one of the many occasions made immortal by the poet BURNS.4 In Scotland, and all over the world where there are Scotch families, the festival is still observed, although in a modified form from that in which it was originally celebrated in the rural districts of the country which gave birth to the superstitions associated with the occasion.5 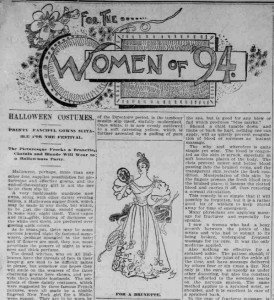 The 1890s start to show an uptake of the holiday in a more popular sense. An 1894 edition of the Salt Lake Herald mentions a Scottish celebration of Halloweʼen, “by those who know how to celebrate it.”6 The celebration included a reading of the aforementioned Burns poem as well as bagpipe solos, a performance on Scottish tradition, and eventually a lovely dance in which everyone waltzed in costume. In 1898, the “Men and Matters” section of the Ohio Democrat even recalled a Halloweʼen party hosted by The Misses Blasius.7 Parties and celebrations were taken up by a variety of communities, all with no mention of the presence of death once affiliated with the holiday. From its introduction as a popular holiday in the United States, void of spiritualsignificance, we start to see articles popping up in various literature with ideas on how to throw the best Halloween party or what costumes should be donned by ladies of society. Halloween became a reason to host parties, don costumes, and play pranks. Trick-or- treating, the somewhat-relevant practice of children dressing up and going door to door for candy, isnʼt seen until the late 1920s and 1930s. The popular comic, Peanuts, offers material evidence of the activity’s commonness by 1951, when the strip shows the gang trick-or-treating.

From a tradition rooted in celestial connection and seasonal transition, modern Halloween holds little resemblance to its roots. Losing its macabre meaning along the way, Halloween took off in the United States in a cultural moment where death left daily life. The early 20th century saw the normalization of the funeral home and embalming, in stark contrast to previous eras where the dead were cleaned and handled by family in the home. Death was also becoming less of a reality for the living as life expectancy grew and infant mortality rates dropped. Consequently, we pushed death out of view. Itʼs no coincidence that the taking-up of this particular version of Halloween corresponds to shifting viewpoints in America on death. With death leaving the home, and the professionalization of the funerary trade, the living could enjoy life. Eradicating death from the public sphere meant that Halloween had no place for the dead in its celebrations. It was easier to market, and therefore profit from, a holiday that was about dressing up, partying, and spending cash to make those things happen.

While Iʼm not arguing for a more spiritual or religious experience through Halloween, it seems worth noting that the evolution of American culture has encouraged a particular pushback against acknowledging death in our daily lives. The late 19th and early 20th centuries marked a time of great change in handling death, and that shift affected how Halloween developed in the United States. Without substantial meaning found in the ceremonial practices of the holiday, we indulge in a communal experience of kitsch and commodity (both ideas with a sound footing in this era). Halloween, in our modern understanding, continues to cast our mortality into the shadows, far out of sight and out of mind.

4 Robert Burns (1759-1796) was a Scottish poet. His poem, “Halloweʼen” clocked in at 252 long and puzzling lines, but attempted to capture the folklore of this celebration. It can be read here: http:// www.poets.org/poetsorg/poem/halloween. As to what other occasions he made famous, as New York Times refers to, I am unsure.