There is currently a resurgence of interest, scholarship, and professional development in the death industry. A substantial portion of this work, both professionally and scholarly is created by women. Women are writing about death, women are making art about death, and women are cultivating professions and businesses around death. 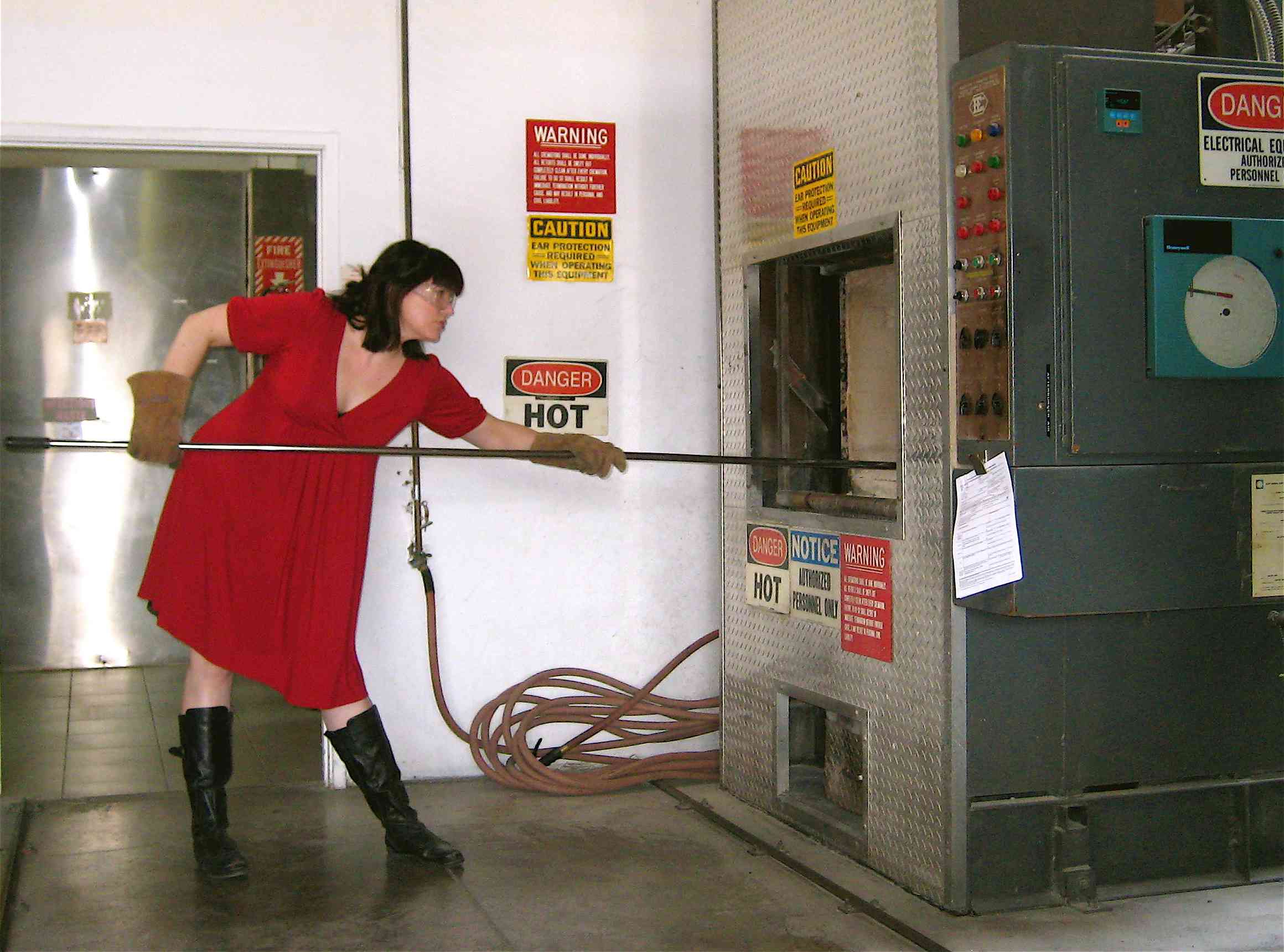 Caitlin Doughty in the crematorium

This particular interest is exemplified by the media presence of women in the death industry. For example, Caitlin Doughty (of “Ask a Mortician” fame) recently opened her own funeral home, called Undertaking LA, where she offers a variety of non-traditional burial options and even provides space and support for a more hands-on funeral service. She has also written a New York Times best-selling book, Smoke Gets In Your Eyes, about her experiences in the death industry, and has been interviewed everywhere from O: The Oprah Magazine to Penthouse.

Joanna Ebenstein, the creative director and founder of the Morbid Anatomy Museum, is also making waves. Originally started as a blog that became wildly popular, Morbid Anatomy developed into a physical space with collections, funding, and staff. The museum, located in Brooklyn, hosts a variety of interesting and educational events, exhibitions, and shows, all related to the subject of death.

There has been a lot of press for these two women, but they are only the tip of the iceberg for incredible ladies trying to make sense of death. Goldengrove’s Maggie Cross is re-introducing memorial jewelry into contemporary culture by grounding her work in 19th-century mourning imagery. Jae Rhim Lee created the Infinity Burial Suit, a wearable outfit for the recently deceased that is embroidered with mushroom spores and assists with purifying the body during decomposition. The suit is currently in development and has been the subject of a popular TED Talk.

The president of Harvard University, Drew Gilpin Faust, penned This Republic of Suffering in 2008, which detailed how American culture was deeply shaped by the mass deaths of the Civil War. There are many more that I do not have room to mention, but needless to say, women are making sense of death in new and innovative ways.

As a woman participating in this culture, I notice this pattern in the numerous conversations, lectures, and studio visits that compromise my post day-job life. Nearly every time I meet someone new, they insist on introducing me to someone they know, nearly always someone who identifies as a woman, who is actively interested in the morose or morbid. Each and every time, I can’t wait to meet her.

I am not surprised by this phenomenon. The body and its functions, including death, are within a woman’s purview. Blood is the marker of many milestones of feminine experience: childbearing, menstruation, abortion, and surgical intervention. Many women are used to visceral changes in the body in some capacity. We are often the bearers of blood and bodies, whether they are living or dead. Some women usher humans into life, while others usher them out. Many women bear the burden of bodies by handling death and its many demands.

In the mid-to-late 19th century, large-scale social and political changes in the United States made huge and lasting impacts on the death industry as we know it, and women carved out their own legacy in this sphere. In this way, women, myself included, have paved the way to today, when women are actively conversing, creating, and coalescing around death.

Let’s take a step back in American history. Even in the 18th and 19th centuries, it was the task of women to handle the dead, as death happened in the home and was understood to be a kind of domestic responsibility.[1] The responsibility of cleaning the body and preparing it for burial was often assumed by daughters and mothers. In many ways, this aligned with the social assignment of the woman-as-caretaker model, which allowed for mothers to both birth and bury, from one beginning to another’s end. Social expectations of modesty in this era forbade many men from interacting with the bodies of women, thus relegating this kind of body management to women.

Death in America changed drastically with the onset of the American Civil War. Grievous loss of life was everywhere: the decay on battlefields, the missing spouses and children, and the nameless graves filled in after armies passed through. Women led the front as nurses and aided in developing the first ambulances, encountering death on a daily basis, as men fought to their demise on the battlefields. The United States lost 7% of its total population in this bloody pursuit, leaving plenty of opportunity for anyone, including women, to manage its gruesome aftermath. 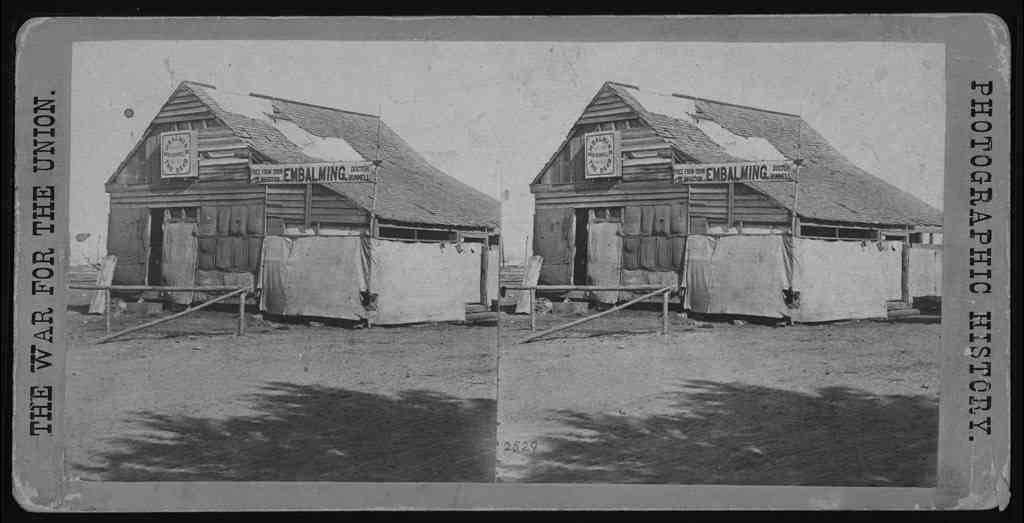 The origins of embalming started with herbs and dismemberment in fourteenth-century Europe, and had certainly evolved by the time this process was explored in the United States during the mid-19th century: the use of chemical injections in arteries proved to be efficient in preserving bodies for transport. [2] Dr. Thomas Holmes, a physician and surgeon working in New York, started to experiment with arterial embalming, similar to the process we know today, in hopes of safely securing cadavers for medical students to work on. With deaths piling up on the battlefields at this very same time, Holmes was asked to provide his new preservative services to the Union Army. His embalming procedures allowed some soldiers to be shipped home without the threat of decomposition.

After the Civil War came to a close, it took years for embalming to become a customary practice. After Abraham Lincoln was assassinated on April 15, 1865, he became the first president to be embalmed. His funeral train drove his body 1,700 miles from Washington, DC to his hometown of Springfield, IL. When Americans came out to his mourn his loss as the train passed through their city or town, they were introduced to the magic of embalming.

In this era, embalming was only exercised on the dead bodies of soldiers and military officers, the social elite, and the politically significant. It was a service that required training and education; the funeral industry professionalized to accommodate the standards and practices of technical expertise. Embalming took the funeral out of the domestic sphere and brought it into the funeral home, a recent advent of this time. Not only did preserving bodies ensure clean and safe travel for cadavers and dead soldiers, it also secured one last glance at a loved one’s body before burial. Instead of a rush to clean and prepare the body before the unsettling realities of death became apparent, there was time for the last goodbye.

The professionalization of the funerary industry created a slew of new job possibilities for those who were willing to work with the deceased and their distressed families, and this seemingly-peculiar trade was open to allowing women to be educated and trained. Many men became trained in embalming because it was associated with medicine, but nearly all medical schools were closed to women. During the Victorian era it was still considered indecent for men to handle the unclothed, lifeless bodies of deceased women and children.[3] This social predicament left many upset families seeking an embalmer to preserve the bodies of their loved ones, but coming up with nothing. There was an obvious gap in this new profession that must be filled. 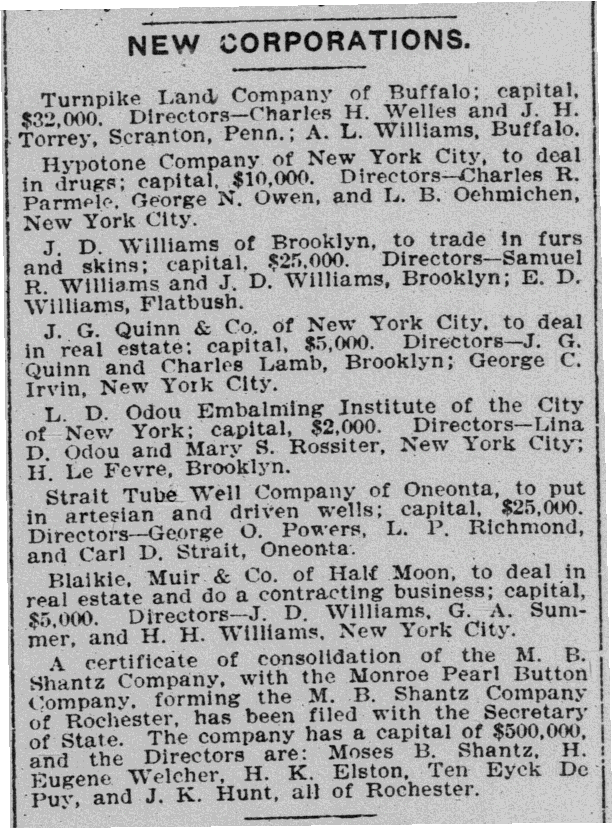 Madame Lina R. Odou understood this need. She was originally raised across various cities in Europe, and was hugely influenced by her colleague and friend, Florence Nightingale. The two women met in London in 1868 when Odou was beginning her training as a nurse, which provided the medical background necessary to be trained in embalming. Moving to the United States from Switzerland, Odou became trained in mortuary science, founding the “Lina D. Odou Embalming Institute” in Manhattan in early 1901 within the Frank E. Campbell mortuary facility. Her institute only provided embalming services to deceased women.[4] Odou went on to found the Women’s Licensed Embalmer Association, which provided professional support, networking opportunities, and a community to other women interested in mortuary science.

Odou’s school provided professional opportunities for women in mortuary science, some of whom would go on to open their own schools. Renowned embalmer, author, and teacher Mrs. Lena R. Simmons attended Odou’s school. Simmons then created a school in her name, which made a lasting impact on my hometown of Syracuse, NY. Founded in 1900 with her husband, Charles A. Genung, it was originally named the Genung-Simmons Embalming Institute. The school always opened its doors to female applicants and was considered a coeducational school from its very beginning. Simmons actively wrote about her embalming chemistry research in funerary publications and also served as a faculty member at the school. She also developed subcutaneous suturing in arterial embalming, also known as “the blind stitch.” 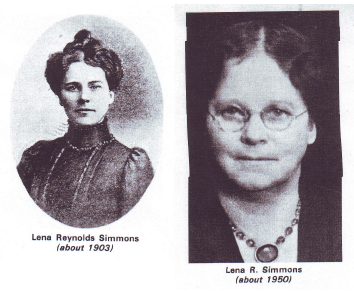 Her legacy in the mortuary sciences spoke to a particular culture and trade that allowed women to practice as professionals in a job where many men flourished. The school changed hands through time; it was handed over to Maurice Wightman (a graduate of the school) in 1986. The school closed recently in 2013, amidst allegations and a lawsuit against Wightman that cited various sexual harassment complaints made by female students and faculty members. This end chapter has unfortunately tarnished the progressive legacy of the school.

Although death may be approached as a profession or subject of last resort, it can also be understood as a practice of creativity, empathy, and agency. Women have created space, as well as income, by offering support and service during the loss of a loved one. In many ways, the macabre is the wild west of opportunity for women, where there are fewer rules and gendered expectations to govern women’s behavior.

It seems fitting that the death industry is seeing a resurgence of interest by women. In the 1970s, female funeral directors only made up about 5% of the professional industry; by 2010, that number is closer to 43%.[5] Many schools of mortuary sciences have seen spikes in their female student populations, with more women enrolling now than ever before; the National Funeral Director’s Association estimates that 57% of current mortuary students are women.[6]

Death, as a subject of inquiry and also as a professional trajectory, continues to serve as a mainstay of opportunity for women. Between sociocultural expectations for women to handle death and professional opportunities for growth in the newly-developed field of mortuary science, death as a trade has become a subject for creative inquisition. Related scholarship has been taken up by more and more women. The lasting impact of women in the world of the macabre creates space for innovation, community, and exploration, ensuring support for future generations of women hoping to make sense of death.