Police brutality creates profit for those in power. A small piece of this larger puzzle is the body or dashboard camera and the distribution of the media that comes from them. Evidential documentation of brutality and violence against the American citizen sells products and media.

Since the murder of Michael Brown in Ferguson, Missouri in August of 2014, the media has shown an increased awareness of how police brutality disproportionately affects Black Americans. There have been calls for more individual accountability for police officers, and the video evidence of body and dashboard cams has become an increasingly popular way of holding police officers to account. Media from these cameras has also been picked up by a variety of news outlets and websites. The videos can be viewed through nearly all major online news outlets.

For this piece, I will be looking at the Samuel DuBose case because it is the most recently publicized story and because it involves video documentation from a body cam worn by the officer who shot him. Media surrounding the story is constantly being added to and discussed, and the visual evidence has been widely shared.

On July 19, 2015, University of Cincinnati police officer Ray Tensing pulled Samuel DuBose over for not having a front license plate. The confrontation escalated quickly and ended with Tensing discharging a round from his gun, shooting DuBose directly in the head and killing him instantly. Tensing said that the car had dragged him and that he was in danger. He was wearing a body camera during this stop. The video of this footage was released on July 24, 2015, and offers direct documentation of Tensing shooting DuBose in the head after a brief and confusing interaction. DuBose remained in his vehicle for the duration of the interaction and was at no point threatening Officer Tensing, nor was Tensing ever dragged by DuBose’s car.

As disturbing as it is to watch, the video footage taken by Tensing’s body cam was quickly picked up and distributed. Many news outlets have opted to play the video that shows DuBose’s last living moments. The viewer watches from a slightly different point of view than Tensing’s own. Tensing’s body cam appears to be recording from its place on Tensing’s chest, looking down onto DuBose, reinforcing a visual power dynamic of Tensing over DuBose. When DuBose is shot, we see him fall back immediately in his seat, his life over in the blink of an eye.

After the original video was shared, additional footage came from two other officers who were called to the scene to support Tensing. Their footage did, in fact, show that Tensing was not dragged by the car and that there was no struggle. On July 30, the Guardian shared all three videos in conjunction, synced up by time to offer multiple perspectives of the same devastating moment.

The Guardian video opens up with a warning about the violent nature of the video you’re about to watch. There is a brief pause, and then the advertisement starts. Clicking play, the viewer is shown 3 to 30 seconds of advertising from a variety of sponsors.

In my numerous reloads, my first viewing introduced me to Charles Schwab, investment gurus offering financial advice and “future planning.” A talking computer with a slight British accent reminds the viewer that they too, have control over their future. Reloading the page, Cisco, the tech mogul who is selling “modern security” in a “hackable world,” offers me their services. I also see a clip from a new online AT&T series, “Escape the Cube: the escape from day jobs to dream start ups.” 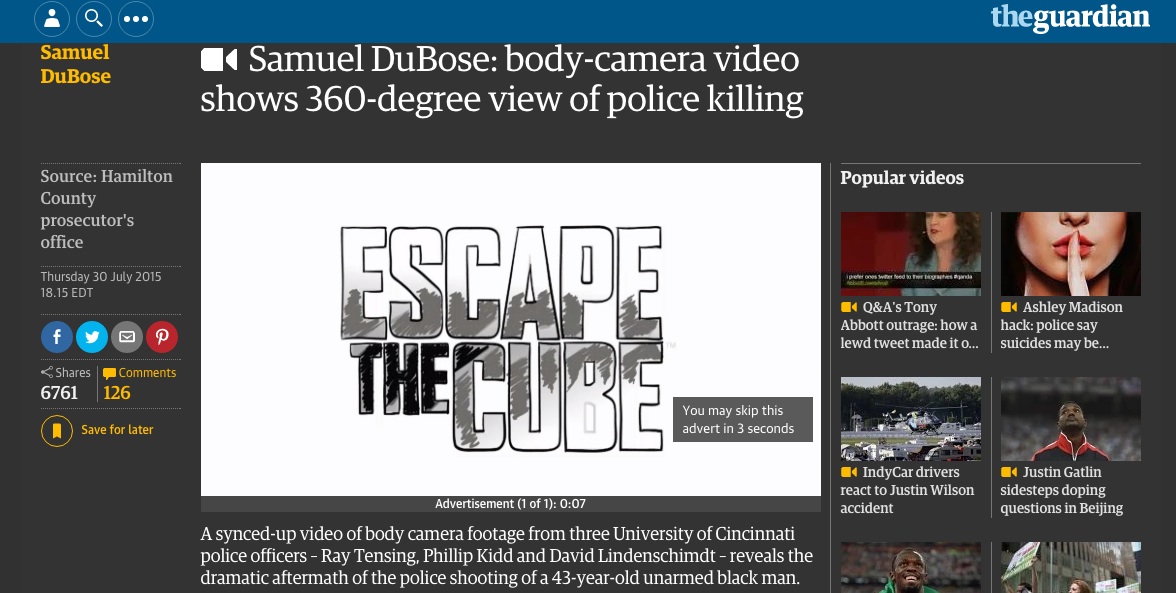 Screen capture by the author

As I readied myself for the traumatic video I was about to watch, I was reminded of DuBose and how his investments and future, despite his planning, would be cut short. He was not in control of his future. I was reminded that DuBose, even with “modern security,” did not have any protection from his world, and that the definition of hacking still alludes to unauthorized actions and violent activity, the kind of activity that victimized DuBose. DuBose could not escape.

The advertising came to an end, and the video started with Officer Ray Tensing asking Samuel DuBose to take his seatbelt off. The video progressed through his murder and its tumultuous aftermath.

The Root, a website for “Black News, Opinion, Politics and Culture” has been very proactive in producing and supporting media around the shooting of Samuel DuBose. On August 3, 2015, they posted a video from May 2014 that shows Officer Ray Tensing pulling over two men in a routine traffic stop. One of the men was able to film Tensing, who provided inconsistent information and was generally rude. This earlier documentation of Tensing shows that his power-hungry and rude demeanor was already in full force, even a year before he murdered Samuel DuBose.

The video itself is hosted through NBC, and it is marked with the brand’s logo in the top left corner of the streaming video. When the viewer presses play, they are confronted with a variety of advertisers: perhaps it’s Unilever talking about their belief in a bright future as acted out through their household brand names like Hellman’s, Lipton, Breyer’s, and Klondike, or a commercial by Vonage, the long distance and international calling company that emphasizes how they connect loved ones across vast geographical distances. There is also a spot for the new Cartoon Network show, “We Bare Bears,” an animated show about three bear siblings trying to make it in the human world. The ads finish, and the viewer watches Tensing bark orders at the two young men in their car.

Watching Tensing, we know what his future holds for him. We watch in the safety of our homes, having the unfortunate knowledge of how this interaction, and what I assume are many others, shaped what happened to Samuel DuBose on July 19.

Screen capture by the author

It’s worth acknowledging that these advertisements, despite being somewhat tasteless and insensitive, are also at random. Companies pay for online video advertising to stream videos on news websites. They do not choose which videos they stream with, nor are they curated by some detail-oriented content editor who applies a tasteful filter to each streaming story. I understand this, but it doesn’t make the outcome of future-oriented advertising spots any less awful.

Lastly, for every advertisement that I, and thousands of others, watched, the websites and advertisers profit. The mere presence of ads on these videos is a cold reminder that even police brutality and the media that documents it are commodified. Companies profit directly from these murders in a vast number of ways, from the design and sale of body cams to the content sites that profit for every person that clicks “play.” The news stations and companies that advertise in-stream with these particular online videos make money from the number of views. For every time a viewer cannot believe what they just saw and re-watches it, news companies profit.

I don’t know where this road leads us. It’s troubling to watch the DuBose video for a number of obvious reasons: it is gut wrenching, it is brutal, it is cruel, it is reality. We must watch this video and others like it because it requires that police officers be held accountable for their actions. On the flip side of that argument, I cannot support the profit made from the watching of such horrible evidence. I can’t help but think there ought to be a way to preserve and acknowledge this recording for all of its necessary reasons, but for it to exist freely and untainted by the powers that be.

If we seek out and share visual evidence of this tragic event, and those like it, it is imperative that it be accessible and removed from any system of profit. The relationship between advertising money and systemic racism are vast and complicated, but the first step starts with severing ties between news distribution and profit from streaming videos. If we can find a way for these videos to exist independently of advertisers, we are taking one small but crucial piece out of this troubling equation.