This past winter, as we all prepared for the change in the White House, restaurants, bakeries, and cafés throughout the country took up the cause of raising funds for important organizations such as Planned Parenthood and the ACLU. For many cities, this took the form of bake sales. While courageous and inspiring, the idea of using bake sales to fund progressive organizations is complicated. For many, bake sales conjure homey feelings of church or school fundraisers, stocked with home-baked goods from virtuous volunteers. Food businesses are taking a fundraising scheme traditionally based out of the home and moving it into the public sphere of restaurants and bakeries. Are bake sales an odd strategy to fund a resistance against an administration that is so ardently waging a war against women? Is a woman’s place STILL in the kitchen? Or is a bake sale an act of subversion, turning the tables on domesticity by turning historically “feminized” skills into a form of radical resistance? 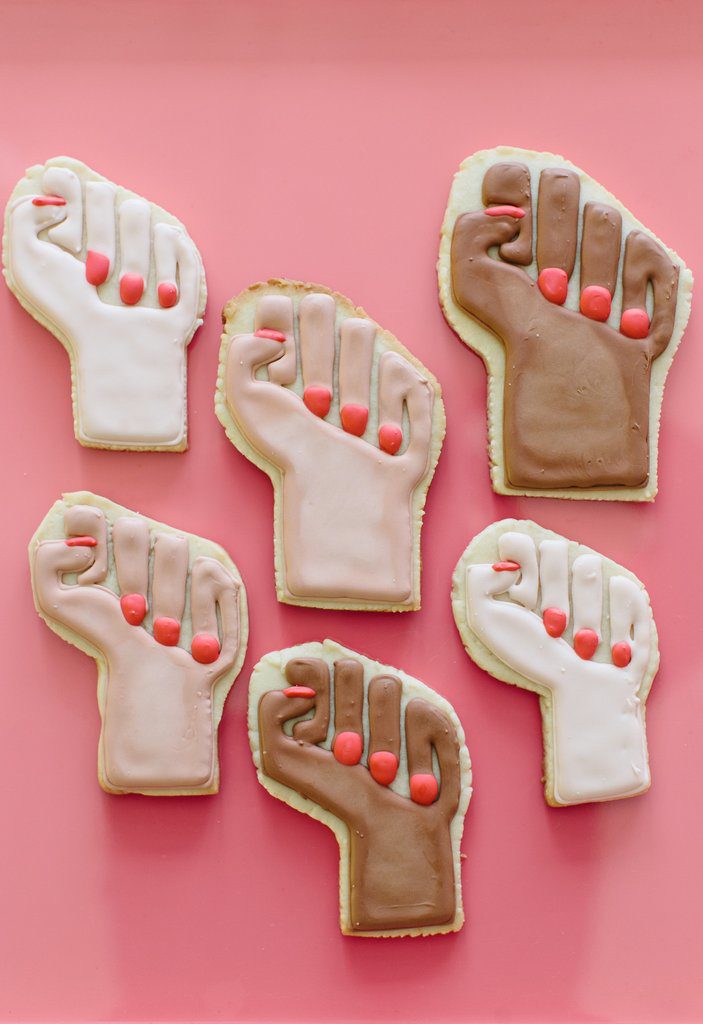 Cookies made for a Women’s March party (baked by The Dessert Pantry following an illustration by Deva Pardue). Image via Bonjour Fête.

Feeding the Resistance, a recently released title by well-known cookbook author Julia Turshen, is aiming for the latter. All proceeds from Feeding the Resistance are donated to the ACLU, making it easy to contribute to the resistance through simple consumer purchasing power. Like bake sales, cookbook compilations have often been used for fundraising efforts and other charitable activities. Selling baked goods and collecting cookbook recipes have been common ways for women to become involved in organizing around larger causes, particularly during war times or large protest movements like Women’s Suffrage. It makes perfect sense that we are circling back to these ideas as we prepare for the next wave of political dissent.

Food is fuel for both body and mind, and it has taken on extra importance in times of struggle and resistance. It can become an entrance into deeper investigations of how cultural value is created and nations are built, placing meaning into the ways we eat: how we make food, and how we share it. To quote Turshen, “to think deeply about food is to also think deeply about the environment, the economy, immigration, education, community, culture, families, race, gender, and identity.”[1] In Western culture, the value of food is closely associated with the labor of women and the home as a place of virtue and comfort. So what happens to these traditional gender norms when we continue to use familiar tropes such as baking and compiling recipes to fund movements that purport to move beyond such Victorian values?

In a contemporary critique, bake sales could easily be dismissed, too enmeshed in the idea that a woman’s place is inside the home. The modern Western history of bake sales and cookbook compilations begins in the Victorian era, an era that celebrated the “angel in the house.” On the blog for the Smithsonian National Museum of American History, historian Daniel Gifford describes the history of women-led philanthropy in the United States. He explains that in the 1800s especially, women were both considered “unique guardians of morals and virtues” and tasked with cleaning, cooking, and raising children. Discourse separated and idealized the domestic sphere, keeping it free from the cruelties of the outside world, including business and commerce. Women inhabited the domestic space, supposedly far away from the harsh, competitive world of men. It is in this “separate sphere” that home cooking and baking became a way to comfort and provide as they raised “good, moral, sober boys into men who would then continue to guide the nation with a steady hand through such brutal forces as capitalistic competition, political contests, and the vagaries of the market economy.”[2] 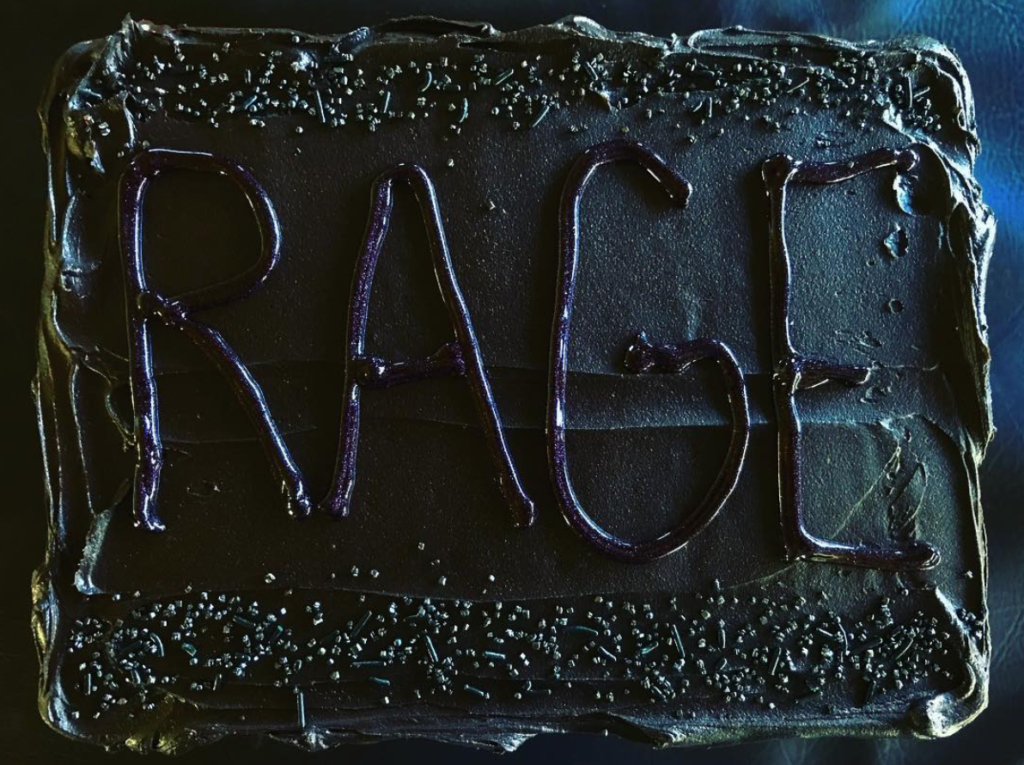 Home cooking is most often unpaid labor and of little value in market capitalism. However, with cookbooks or baked goods available for purchase, cooking and the value of it enter the market, changing their value. When food or books such as these manuals for resistance are used to raise funds for charitable organizations, they become commodities, what Gifford calls “instruments of market capitalism.” Market capitalist aficionados like Ivanka Trump, who claim feminism just for “women who work,” form false narratives that unpaid domestic labor is of little to no value. For capitalist feminists, bake sales are an step up from home cooking—what was once considered feminized work becomes part of the larger capital system, giving it monetary value and elevating domestic work to paid labor.

The selling of these baked goods and, to some extent, cookbooks, commodifies feminism and activism, allowing consumers to feel good about investing in a movement while not necessarily participating in more time-consuming work of resistance. Rather, consumers are acting within the capitalist model and, as Jordyn Lexton reminds us in her contributing essay to Feeding the Resistance, “How Food Can Help End Recidivism,”  “…our country is fueled by capitalism and capitalism in America is founded on white supremacy…The economic dependency of white men on black and brown bodies runs deep in our history and today.”[3]

The recipes in Feeding the Resistance are easy to make and intended for large groups of people, who are, say, gathering for a protest. Among the recipes, written by various contributors, are essays by activists, writers, and specialists in the food industry. They consider their part in a food system that easily lends itself to capitalist politics.

One crucial component to these projects, and to markets in general, is publicity. In order to garner funds and purchases, Turshen and other writers, chefs, and makers rely on the internet and social media to raise the visibility of their projects. Instagram hashtags (#feedtheresistance, #bakeamericagreatagain, #protestcakes), online planning, and press help to produce a successful campaign.

Sharing via social media is a mainstay in contemporary culture and a huge part of publicizing and sharing ways to protest and resist. For example, the Women’s March on Inauguration Day began with a simple Facebook post. However, during the Civil Rights era, an integral part of staying safe while supporting the cause was anonymity. One important and overlooked contribution to the Civil Rights movement, The Club from Nowhere, is an instance in which we are able to understand the power of protest through food and the significance of women’s work and domestic labor as part of resistance.

is a good reminder that while this book happened quickly, its roots are way older than this administration, and needless to say, myself. The contents of this book stand on the shoulders of other moments in time when resisting was a way of being and required understanding, compassion, action, and nourishing food to be sustainable.[4]

Georgia Gilmore, a black cafeteria worker, founded the Club from Nowhere, “an organization of maids, service workers, and cooks seeking to aid boycott.” The Club from Nowhere began in Gilmore’s home kitchen, as a movement of silent solace and a place where black donors were able to gather and organize. Gilmore sold food that she had made in her own kitchen, as well as food that had been anonymously donated, on street corners, in hair salons, and at other community spots. Proceeds from what the club sold went directly to the MIA (Montgomery Improvement Association, an organization formed following the arrest of Rosa Parks and helmed by Martin Luther King, Jr.). Gilmore and her club, made up of mostly black, female, domestic laborers, also made food that provided sustenance to marchers and protesters in her community. This important work kept the community and organization afloat, with the funds going to coordinating rides and funds for those who lost their jobs for protesting. 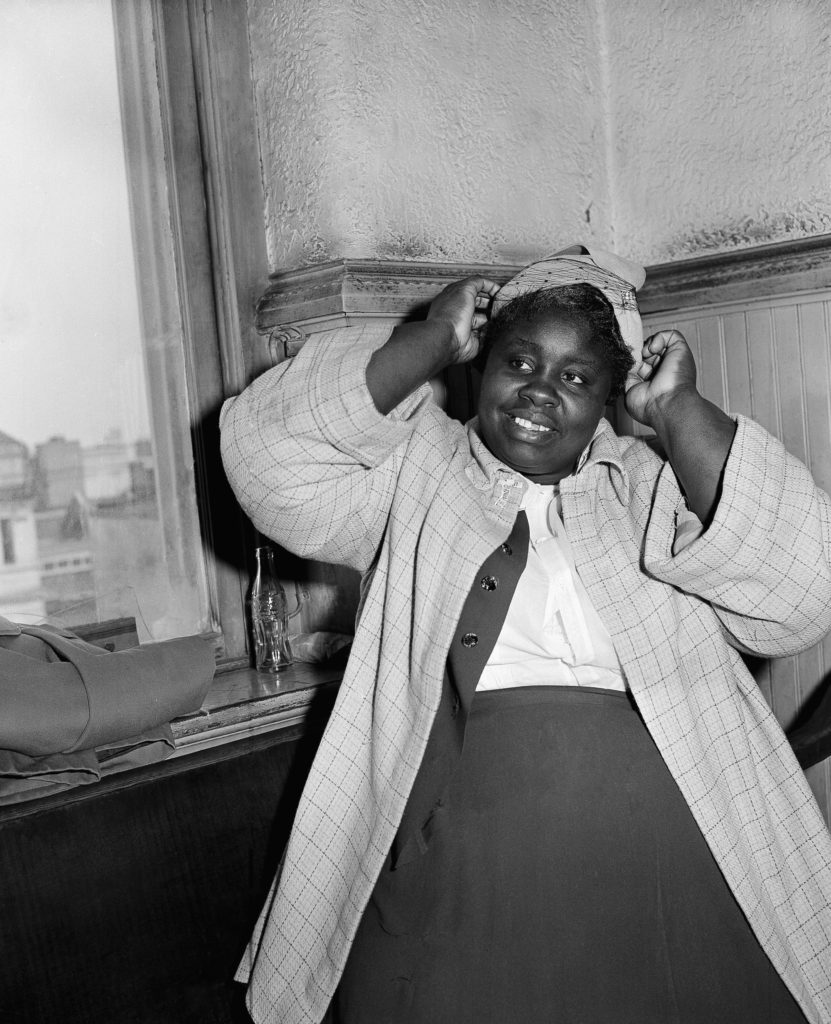 The importance of anonymity was paramount; black donors risked losing their jobs with white employers for supporting the movement.  When Gilmore herself was fired for organizing and supporting political resistance, she pushed harder, cooking for the community in her own home kitchen. With the support of leaders in the community like Martin Luther King, Jr, her home became a gathering place for protesters and activists. Allowing the private to become public,  Gilmore transformed her domestic space into a place of power.

Feminist scholar Anne McClintock tells us, “the power of black women is a colonial secret.”[5]In discussing the tools to create nationalism and patriotism in South Africa, McClintock delves into the power of the home and the seemingly intrinsic moral high ground of middle- and upper-class white women. The white wealthy home is not as virtuous as it pretends: “white domestic life enfolds itself about this secret, as its dreaded, inner shape.” She goes on to explain, “moreover, women have power and women resist; they are not the mute and passive sufferers of victimization. But the effects of and potential for resistance take different forms in different social moments and are shaped by the enabling conditions of time.”[6]

When applied to the U.S context, there are commonalities. In the case of the Civil Rights Movement and women like Georgia Gilmore, black service workers were employed in white homes where they were, as Patricia Hill Collins writes, “outsiders within.” Allowed in for their domestic skills, these workers kept houses cleaned, children clothed, and white families fed so that the free market, and the dominant culture of whiteness that it enabled, could be maintained. However, black domestic workers used their same domestic skills to sustain marches and other forms of protest.

Literally feeding the resistance via dinners, bake sales and cookbook compilations such as this one shed light on what McClintock calls “the vast, invisible labor of working-class women, both black and white.”[7] 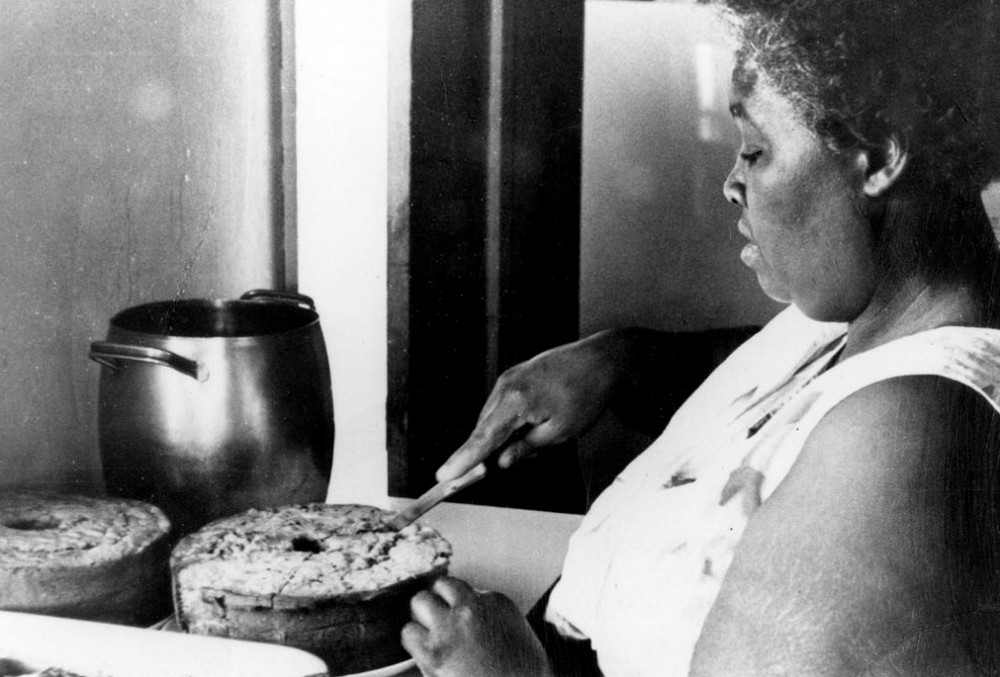 Yet, Feeding the Resistance makes an effort to work against the traditional patterns of using the feminine, domestic space to enter the free market. Turshen’s project celebrates not only the forms of dissent of white, middle-to-upper-class women but also expands the canon. The list of contributing essayists is intersectional—essays written by writers and workers of color span subjects from Black Lives Matter to hiring and sponsoring dishwashers. Turshen herself, in many of her recipe introductions, notes both historical and contemporary figures that have worked within the food system to raise funds, resist, and use food as a weapon for social change.

Within the first ten pages of the text, Turshen recognizes her position: “At the end of the day I am a white, able-bodied, cisgender, educated, financially secure person in America.”[8] By checking her privilege and raising the visibility of the women of color before her, Turshen uses her voice to raise the volume of many others. In doing so, she is not only amplifying those who have worked hard for systemic change, she is also making note of her place in all of this. As a white woman of means, she is doing the work of radicalizing the feminized and undervalued work of caring.

In many ways, food is a place where cultural values intersect, becoming a way of understanding and a path of resistance against misogyny. Turshen recognizes her privilege but also uses it to ensure that these histories are not lost. We will need those histories as we navigate the future of resistance ahead.