A Wrinkle in Time: the Horniman walrus and colonial legacy

History is built on the sharing of stories, and often, on using objects to convey those stories. There is a cultural power in historical objects, steeped as they are in the many structures of power, that serves as an entry point for understanding a certain moment. Many of these kinds of objects are revered in museums, where they are visited and taken up as tools of learning, often removed from the wide stretching web of where something came from and how it came to be.

In this way, taxidermy is a prime example of how human intervention on the “natural” environment is shaped, constructed, and disseminated for socio-cultural means. In direct relation to this, the many stories of colonialism are also embedded in the slaughter of these animals, done in the name of conservation and knowledge building. For many cultural institutions, taxidermy specimens not only serve as an introduction to faraway lands and creatures outside of one’s own space but also as powerful objects that disseminate a particular story of political lineage and cultural expectation. This is what cultural geographer Merle Patchett would term as a “geobiographical approach,” which situates the specimen as a dynamic placement within this complex narrative.[1]

Collected specimens serve as variable chess pieces within museums, taking on the shifting boundaries of the world. The meaning of these animals changes as our political relationships shift. For longstanding institutions that continue to flourish as years and eras pass by, the collections take on different stories and ramifications. One way to begin to explore these shifting relationships is by looking at a particular walrus.

The London-based Horniman Museum was founded in 1898, when it opened its doors to an eager public who wanted to see the growing collection of Mr. Frederick John Horniman. Horniman was a collector of all things, from animals to plants and anthropological specimens to craftwares. A wealthy businessman, he sought to share his “findings” with the fine people of London by establishing a public museum when his own private home became overrun. Horniman was interested in establishing a museum that painted a vast portrait of the world, and he was less concerned with creating a particular vision of the British identity than many other museums of this era.[2] He sought to share his vision of a world in which its visitors could begin to understand a universe beyond its English borders. He also sought to provide a space for his collection to grow, a space where it would be cared for and appreciated. 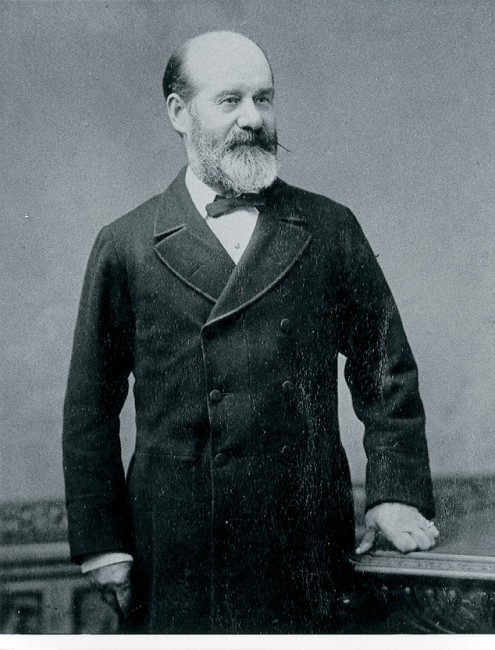 Flash back to 1886, when the Colonial and Indian Exhibition was held in London. It brought in millions of visitors to peruse exhibits on the imperialist tendencies of their motherland. Exhibits included variations of the lives of native peoples, along with their respective environments and objects. The proper Victorian English were welcome to stroll through the grandiose halls and learn about the spoils of colonial expansion while catching an exciting woodcarver from a faraway land that was currently suffering under the rule of England. Highlighting this narrow lens, the natural environments of  indigenous peoples from around the world were reconstructed in various ways.

One of the most enticing exhibits at the Colonial and Indian Exhibition was the display of Canadian animals, who were all large and impressive beasts, such as the moose, the American bison, and various bird species. Arguably the most unique animal on display in the Canadian display was the walrus, encased in a glass cube. Most cultural enthusiasts of this time had never seen such a creature before. With its rotund body and large, downward pointing tusks, the specimen created quite the stir.

The story goes that the walrus had been hunted by James Henry Hubbard, renowned hunter and explorer of the Hudson region of Canada; Hubbard also collected other regional animals for display.[3] Despite Canada being granted independence from England on July 1, 1867, the English still held close political relations with Canada and included it in the Colonial and Indian Exhibition: a gentle reminder that Canada wasn’t exactly free just yet.

Hubbard killed many animals in the name of conservation, one of which was the now infamous walrus. When this walrus was hunted and killed, Hubbard, who served as president of the Manitoba Gun Club, sought out strange and interesting animals to send back to England for the Exhibition.[4] In this era, many hunters would salt animals and hides in order to preserve them. There is no record of how the walrus went from his home in the Hudson Bay region of Canada to the bustling city of London, but one can imagine a salted walrus carcass carefully arranged on a cargo ship. Not included with the carcass, however, was a visual rendering of what a living walrus really looked like. The preparers of the taxidermied walrus had no photograph or drawing to work from but instead concocted the walrus form in their own way. Having nothing to guide them, the re-imagined creature took on a new life.

The walrus, as we know it, is marked by its many patterned folds of flesh. The length of their bodies are covered in nooks of skin, each hanging over itself as a means of staying warm. Even walrus ears are actually just folds in the skin, which makes them very hard to notice. The variations of folds in their skin vary depending on age and sex, but all walruses are marked by these overhangs of flesh, which lay on top of a thick layer of blubber. Walrus skin varies between grays and browns, with lighter pinks forming when their skin warms in the sun, as well as on the abrasions and cuts they might get from their harsh, arctic environment. We know all of this now, but for the hunters, shippers, and handlers of this strange animal, they must have been at a loss.

With no visual guidance to inform the sculptural structure of the walrus itself, the taxidermy preppers went to town, filling the walrus to peak plumpness. The interior of every fold became visible to the world, and its skin stretched unnaturally taut. The walrus was no longer defined by the folds of its skin, but rather by its blimp-like shape and comparatively tiny tusks, poking out like strange daggers from a leathery balloon. The walrus, once based in reality, became an act of fiction in one structural misstep. 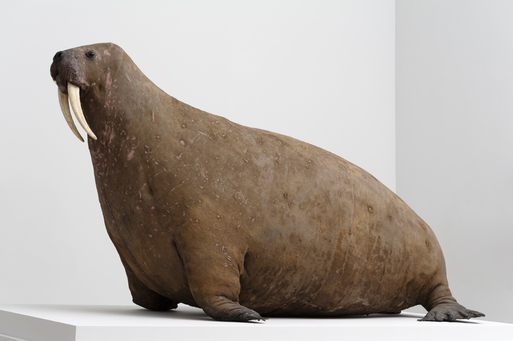 Mr. Frederick John Horniman purchased the walrus for his own personal collection after the Exhibition had come to a close. Horniman not only purchased the walrus but also took on the political implications of displaying this creature, who simultaneously represented a false visual rendering of what walruses actually looked like and served as an ongoing reminder of the colonial legacy that England maintained with Canada. The walrus, to this day, sits as one of the most enjoyed and discussed exhibits in the Horniman Museum.

Conor Creany, historian of the Victorian and Edwardian eras, analyzes the frozen body in Victorian-era taxidermy, arguing that “[t]axidermy performs a temporal synecdoche: as Jane Desmond suggests, it ‘animates the animal body in time by situating it in an implied narrative that includes the moments ‘before’ and ‘after’ that which we see frozen in front of us.”[5] While the implied narrative here points to the ambiguous iceberg that the body is perched upon, it can also be argued that the implied narrative situates this still, bloated body within a large framework of colonialism. The Horniman Walrus is an active participant in the large web of power, history, and colonialism that England continues to exemplify.

The Horniman Walrus, aside from its long life as a colonial object turned museum acquisition, and its fame as a tourist destination, exemplifies the larger lore of how we imagine colonialism. Itʼs crucial to consider the ways in which objects, including those that were once alive, continue the colonial legacy of their forefathers. Despite the tenuous and often humorous lifespan of the Horniman walrus, it does not exist in a kind of cultural vacuum, even in the contemporary moment. The Horniman walrus is as popular as ever as a kind of longstanding inside joke, in which museum-goers continue to be amazed by its bloated body but perhaps remove it from its powerful lineage. 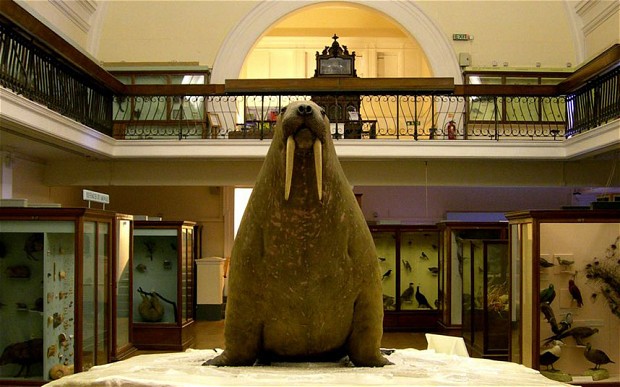 The encounters and relationships we have within museums not only shape the way that we interact with and understand our world but shape us with with their subtitles. Even when encountering something as hilarious as the Horniman walrus, it’s a complicated dance to try to navigate the many intricacies that the walrus’s colonial legacy truly inhabits. For an animal that was killed over 130 years ago and continues to be located within a museum built on English soil, what would it mean to send the Horniman walrus back to Canada, for it to be returned home?

It’s worth noting that sending an overstuffed, taxidermied walrus across the ocean presents numerous logistical and conservation challenges, nor does it right the wrongs of colonization. The problem is much more complex. However, regardless of where the Horniman walrus calls home, its complicated lineage ought to be contextualized as such. Not only is this gray, marshmallow-shaped creature enjoyable to smirk at, its history is much more nuanced and representative of the spoils of colonialism in its many manifestations. Colonialism reaches far into the lives of those under its rule, and includes economies and humans, as well as animals and nature.

The Horniman walrus is a fitting example of how colonialism can be imagined, and it serves as an accessible entry point into how objects take on and enact historical and political narratives. Leave it to a sassy, tweeting Walrus in London to remind us that no object is innocent, and that power and history are active participants in our contemporary world.

[2] Bailkin, Jordanna. The Culture of Property: The Crisis of Liberalism in Modern Britain. Chicago: University of Chicago Press, 2004. 171.