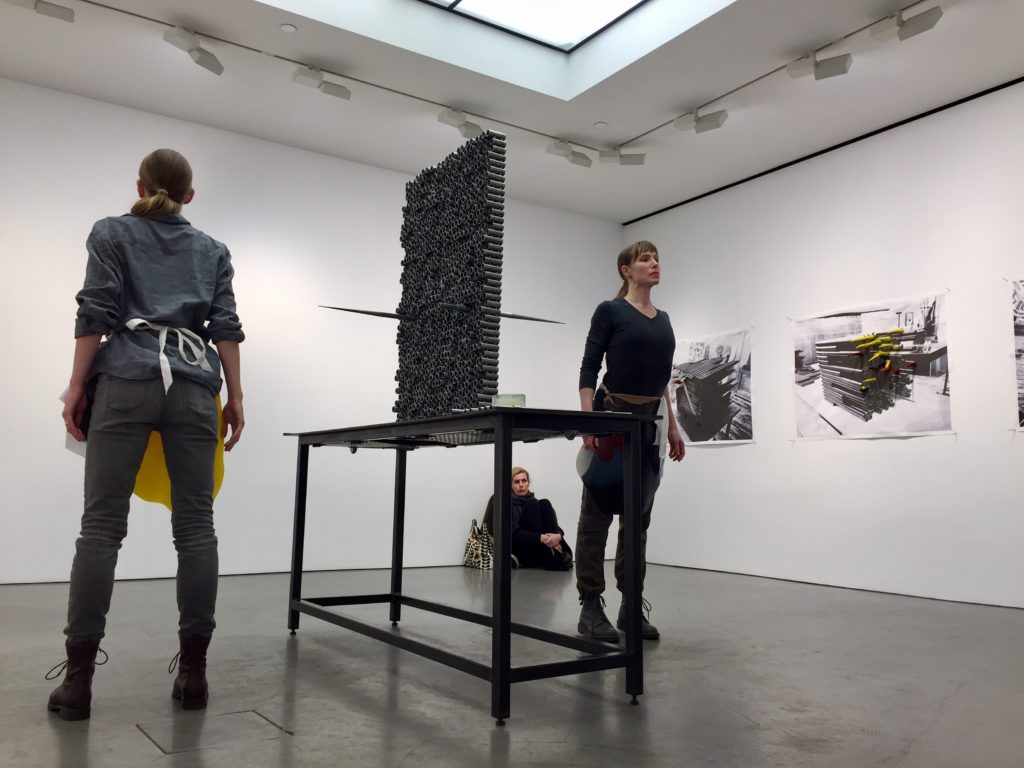 Each month, Dilettante Army’s editors choose an exhibit or art happening for resident poet Molly Jean Bennett to address in a poem or short series of poems. This month, Molly takes on a new work of sculpture and performance by Martha Friedman. Our correspondent visited Andrea Rosen Gallery on a frigid Saturday to view Friedman’s solo exhibition Dancing Around Things, which ended March 11. The gallery is situated on one of those western-most Chelsea blocks, where gusts from the Hudson and the West Side Highway create hostile wind tunnels that make it seem as if everyone who enters the gallery has been literally thrust in from the cold. 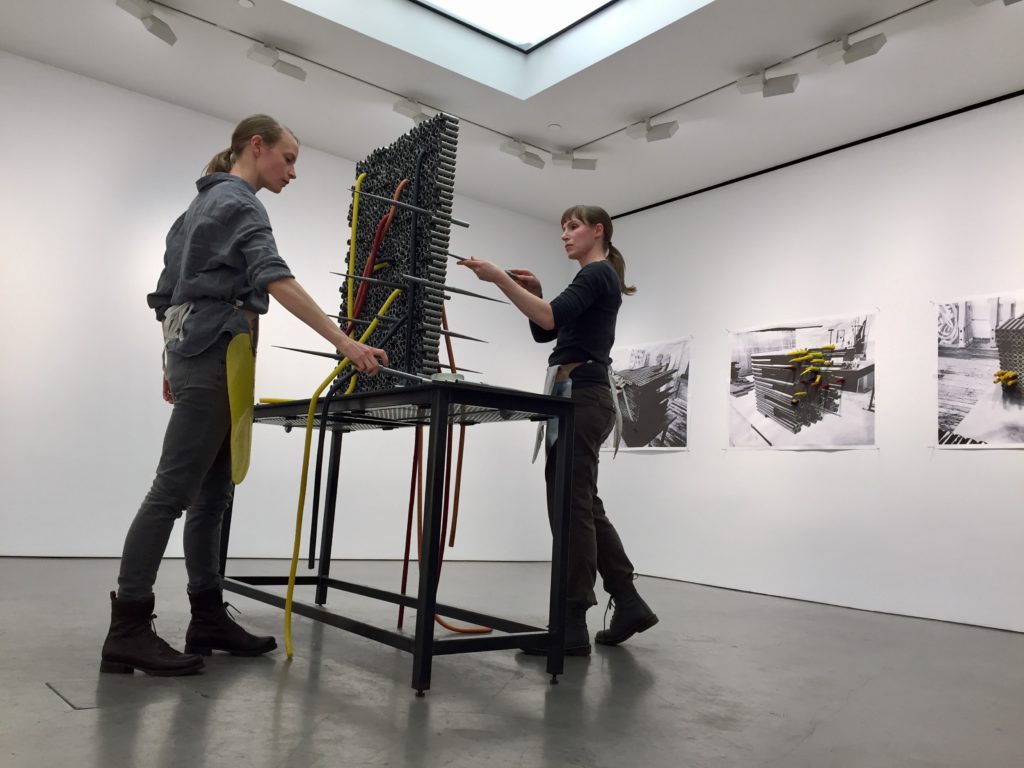 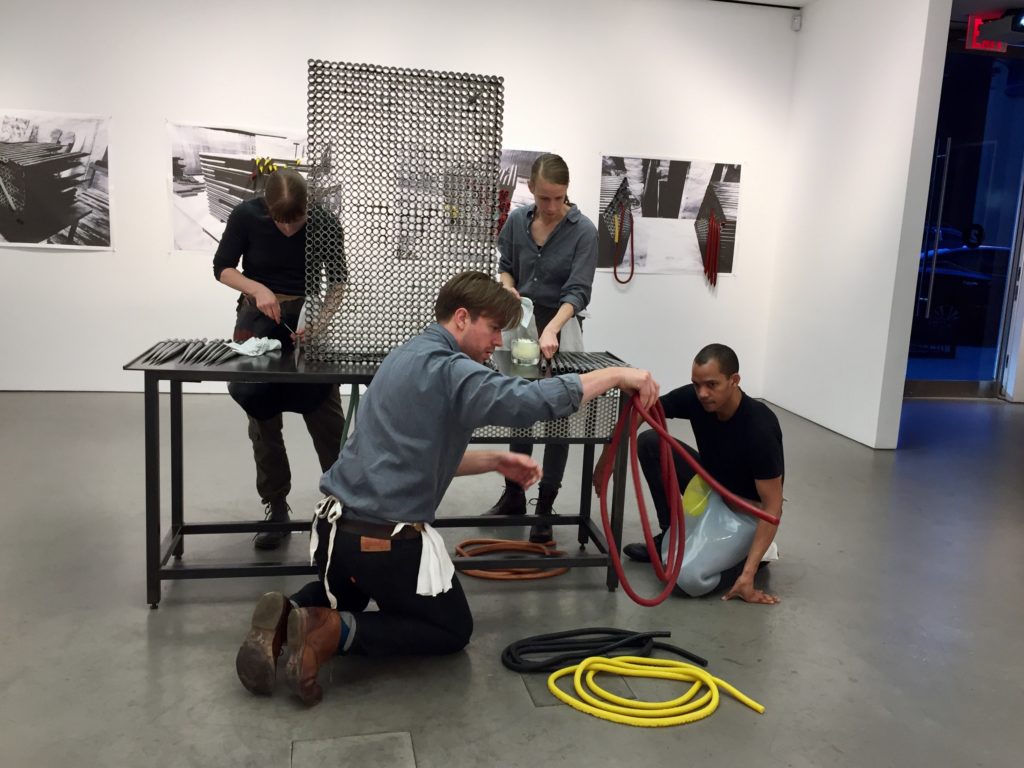 Atop a table in the center of the main gallery was a sculpture “made up of a latticed metal screen variously woven and penetrated with soft rubber tubes in hues referencing the four humors—black bile, yellow bile, phlegm and blood—and metal spikes.”[2] This is not the first time Friedman has represented the four humors with rubber forms. Her 2015 work Pore, also a collaboration with Riener, featured rubber elements that evoked the body’s interior.[3] On the day that our correspondent visited, the sculpture was “activated.” That is, four dancers interacted with the sculpture in a performance conceived by Friedman and Susan Marshall and performed by Susan Marshall & Company. Together, the sculpture and dance are called Two Person Operating System. During much of the performance, two dancers at a time interacted with the sculpture, though at points all four converged. 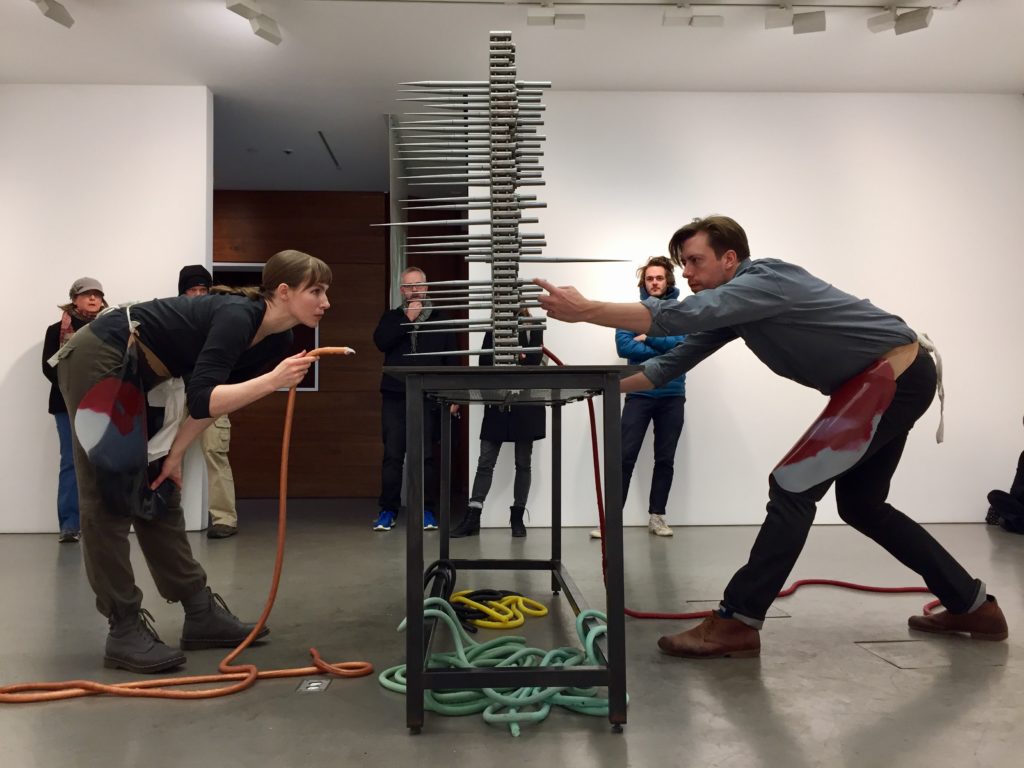 The dancers threaded the rubber tubes through the cylinders in the metal screen and also placed, removed, and replaced the spikes. Maintaining neutral facial expressions, they alternated between small, precise gestures and exaggerated movements of the hips and shoulders. According to the gallery’s press release, “the project’s form…alludes to work and labor, from contemporary circuit boards to the archaic telephone switchboards operated by large workforces of women.”[4] 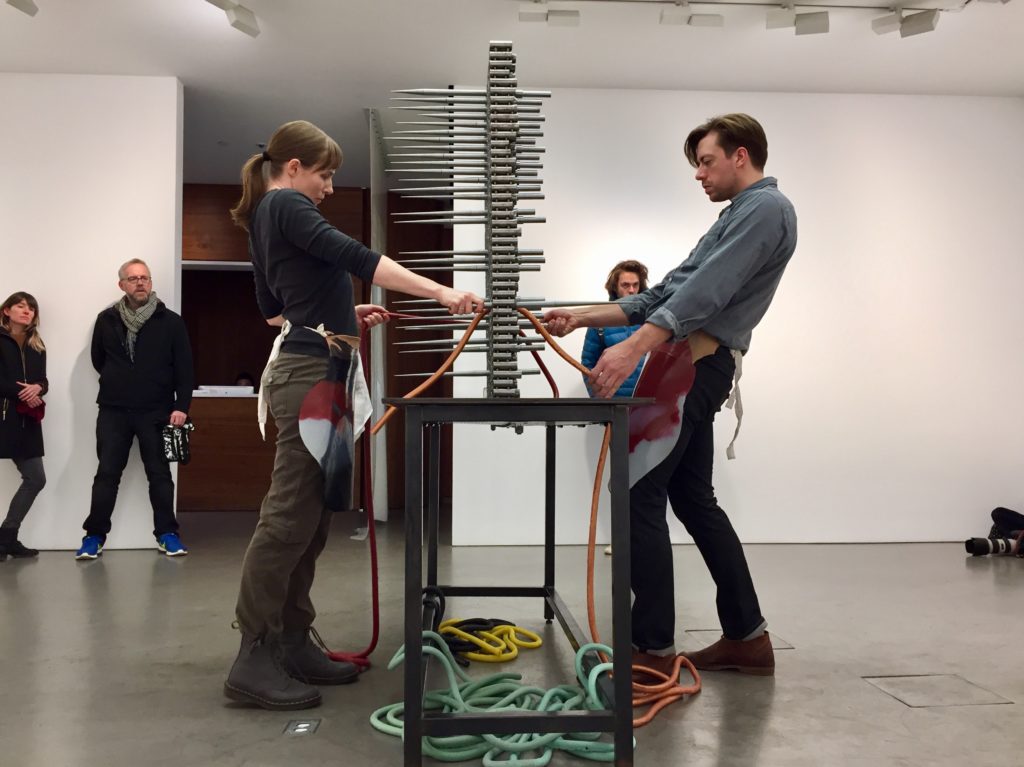 Two Person Operating System intends to “confound our expectations of the form and substance of the most ubiquitous of objects and materials, drawing parallels with the material condition of the body, beckoning viewers to contemplate their own corporeal situatedness.”[5] Indeed, our correspondent watched the movement of bodies and objects and contemplated her corporeal situatedness. Here is the resultant poem.

I. Who Will Stab These Tiny Voids?

There is a factory where
all day women stab
at steel holes. They thrust
sharpened poles
through a wall
of cylinders, piercing
only the air behind.
Sometimes men
come to watch them.
Sometimes
the men stab too.

Here is a dream that comes to me often:
I am fighting an attacker I cannot quite

see. He envelops me or holds me
down as I stab, punch, kick without

connecting. My feet, my fists,
the knife I have somehow acquired

are no match for this liquid assailant.
I am sluggish. She is everywhere.

Sometimes the women
pull the lever that unlocks
the secret compartment
in which the tubes are kept.
Hollow ropes of rubber
like garden hoses, but less
stiff. Which is to say,
more limp. They thread
the tubes through
the wall of holes,
connecting something
to something else.

it would reach twenty feet, which is
the length of a shipping container

intestine, or your large for that matter.
Disembowel is one of my least favorite

words in the language and please,
won’t you stay here awhile?

III. Leading with the Hips

They step away
from the wall of holes
and when they move
back towards it
they lead with
the hips, arching
their shoulders
back so the body
becomes a crescent
moon—strange, shy,
necessarily nocturnal.

No one taught me to dance the way I do.
I absorbed what I know from telephone

wires and a dropped drawer of spoons.
I learned from a cucumber, an egret,

a brick path that was missing a brick.
I dance because I cannot not—the body

propelled by the brain which is
the body will not go off, will not ever go off.