Each month, Dilettante Army’s editors choose an exhibit or art happening for resident poet Molly Jean Bennett to address in a poem or short series of poems. This month, our correspondent takes on a sculpture by one of the twentieth century’s heavy hitters: Constantin Brancusi.

The poet encountered The Miracle (Seal [1]) on its perch at the Guggenheim, where there are currently eight Brancusi works on view. Born in Romania in 1876, Brancusi lived most of his working life in Paris, where he kept a large studio and (the poet assumes) took wardrobe and personal grooming advice from a wolverine peasant.

He is known for his “simplified, stylised, curved works which expressed, or at least suggested, ideals or non-concrete concepts.”[1] Brancusi described his work in this way: “There are idiots who define my work as abstract; yet what they call abstract is what is most realistic. What is real is not the appearance, but the idea, the essence of things.”[2] Brancusi often portrayed animals, including humans. In one controversial work (NSFW, probably), he interpreted the essence of the feminine (ahem) in an object that may exemplify the very zenith of phallocentrism.

Happily, though, our correspondent did not engage with Brancusi’s human musings. She went straight for the seal. 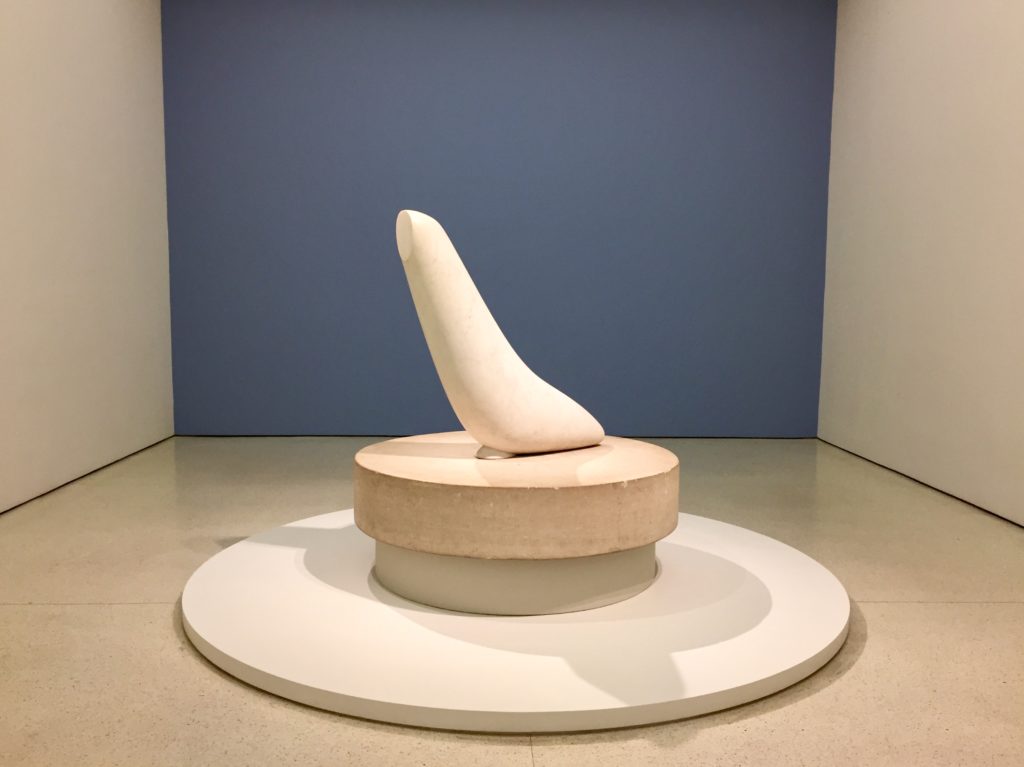 Photo by the author

Like slick
bodies in the harbor
that bark and fart,
launching themselves
on the beams
beneath the pier.

Gastropodic, robotic,
mammalian but
not miraculous,
hardly sacred.
I could say that God
receded but
when I was eight

the mothers
of the neighborhood
prayed for a miracle
for the grandfather
in Nevada
with Leukemia.

Listen: it came
to pass. The grandfather
got up and walked
around and flew out
for Easter dinner
that year. Later, I lost

the long-haired man
in the sky. I lost the devil
with his peeling skin.
But I held the grandfather
in Nevada,
the whispering

mothers willing him
to rise. A marble shape
is not miracle but
mineral plus mind
plus labor. Yet it arcs up
just so

like a man stretching
after a long sleep
like a seal throwing
herself
onto the safe plane
where she can rest.