Each month, Dilettante Army’s editors choose a work of art for resident syllable-arranger Molly Jean Bennett to address in a poem. Molly is joined this month by poet and editor Grant Kittrell in responding to Edward Hicks’s The Peaceable Kingdom (circa 1833-1834). The painting is currently on view at the Brooklyn Museum as part of an exhibition titled Visions and Myths of a Nation, 1800–1890. 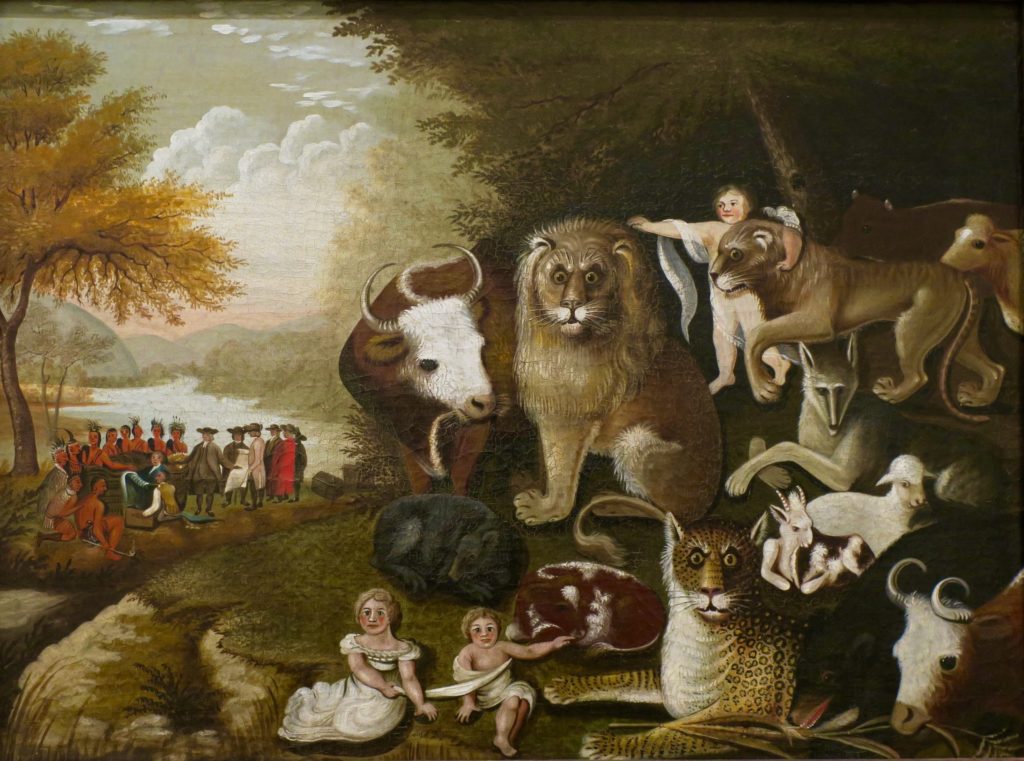 One of the reason Dilettante Army’s editors chose this particular painting is that the animals look “quite, and probably rightfully, alarmed.”[1] With their wide eyes and furrowed brows, the big cats in The Peaceable Kingdom do indeed appear to be mightily concerned about something, in spite of the fact that they are inhabiting a biblical utopia. This work is one of more than sixty representations Hicks painted of Isaiah’s biblical prophecy of a peaceful kingdom:

The wolf also shall dwell with the lamb,
and the leopard shall lie down with the kid;
and the calf and the young lion and the fatling together;
and a little child shall lead them.

And the cow and the bear shall feed;
their young ones shall lie down together:
and the lion shall eat straw like the ox.

And the sucking child shall play on the hole of the asp,
and the weaned child shall put his hand on the cockatrice’ den.

Hicks was not formally trained as an artist, but drew upon his previous experience as a painter of houses, signs, and carriages. After a youthful period of unseemly “singing, dancing, frolicking”[2] and dice games, Hicks reformed himself and returned to the Quaker faith. He became active in ministry, frequently giving speeches on the evils of liquor. In 1811, he became a minister. However, Hicks’s flair for ornamentation—both on carriages in and in his landscape paintings—put him at odds with church leaders. Incorporating religious topics into his art was how Hicks hoped to legitimize what he called his ”excessive fondness for painting.”[3]

Over many renditions of The Peaceable Kingdom, Hicks honed his technique and made alterations to the background imagery. Some versions contain visual references to the Quaker schism of 1827[4]. The painting on display at the Brooklyn Museum, however, depicts William Penn’s treaty with the Lenape in the background. It should be noted that Hicks based the scene on a painting by Benjamin West who was, happily, a member of the Society of Dilettanti.

The Peaceable Kingdom is Yours

Pet the lions, babes. Touch
the leopard on his paw. Get in there,
babes. Everything soft and wide-eyed
is yours. Pay the claws no mind, babes.
No thorny fangs will find your throat.
See the calf, babes? Grab her. Stick
your fingers in her nose. Lie down with
the bulls, babes. Ignore the horns.
They can only mean you well. The place
that was promised us is not far off, babes.
Overhead trees form their feathered awning
and clouds spread like mushroom caps.
In the mythic distance men join hands
as bears and panthers take up the hymn.
All of this is yours, babes—take it.
Never uncurl your tiny pale fist.

a lamb always ever tastes like lamb
to a wolf. Same goes for baby, no matter
how pasty moonlight it may be.
No one ever touches each other
in heaven. No blood’s lost here
but everyone’s praying red—
Bear is, bull is, the lamb
shifts a little bit at night.
Nearby a wet crescent is unfolding.
In this scenario, Babe goes first.
What does it mean to intend the blood
but never make it shed? Wolf and never be
wolf. Our dreams are lung-soaked bar rags
the neighbor threw out after a good night.
At least back home our dreams were dreams
and you knew where my shadow stood at noon.
Back home I ate you, Chicken Mama,
why won’t I do it again? In this
scenario, the god between us
sent us all to the same corner of the class
and said rethink yourself, told us
to love each other. Me and Turkey
both wonder what “love” means.
We wonder if we can touch it.
We wonder how it tastes.