Each month, Dilettante Army’s poetry correspondent writes a poem in response to a work of art. This time, she chose a mural in the Alberta Arts District of Portland, Oregon. The neighborhood is well-known for its murals; in the 1970s, Isaka Shamsud-Din, a community organizer and founding member of the San Francisco’s Black Panther Party, spearheaded the Albina Mural Project. The project produced a number of large community murals depicting black history. While none of the original 1970s murals on Alberta have survived, a 1984 work depicting Malcolm X (painted by Lewis Harris and students at the Black Educational Center) was recently restored.[1] Many of the more modern murals add to the colorful, instagrammable appeal of the rapidly gentrifying area. At the same time, some allude to the historically black neighborhood’s ugly redlining past.[2]

Our correspondent chose to focus on a mural by Pablo Gonzalez, a prolific muralist whose spray-painted works can be found on food carts, exterior walls, and inside businesses throughout Portland. Animals are a common theme in Gonzalez’s murals—another of his Alberta street pieces features a huge elephant swimming underwater, and his 2016 painting on a cannabis dispensary in Southeast Portland of a monkey in a space suit smoking a “dab gun” caused quite a stir in the neighborhood.[3]

The mural our correspondent selected, which features a squirrel and skateboarding dog against a surreal backdrop, was completed four years ago. The poet was able to reach Gonzalez by phone, and he confirmed that the work is based on real life events.

One time when my dog was chasing a squirrel, she went on top of a skateboard. It was a funny moment because her eyes were going crazy for that squirrel. As an artist I’m always looking for inspiration, so I thought about what was going on in [my dog’s] head…The pyramids are there because the person who owns the building really wanted a pyramid.[4]

The dog’s name, it should be known, is Bella. 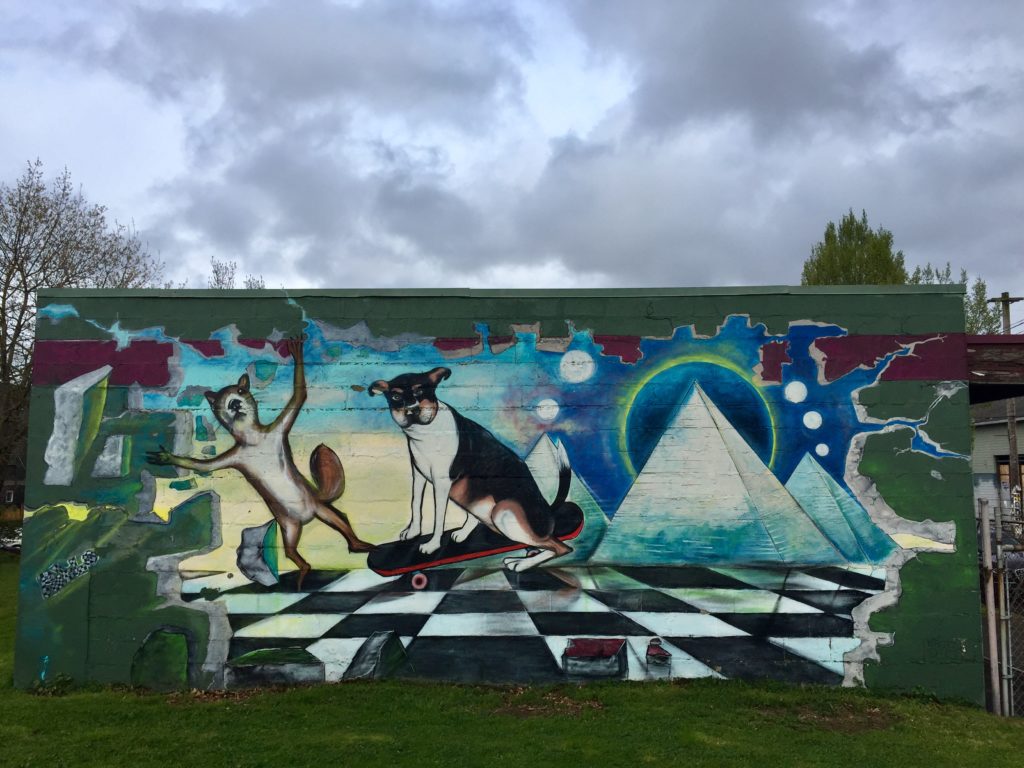 Photo by the author

The painter requests that you imagine
this other reality busting through
the western wall of the garage: six moons
rising over the pyramids of Giza. A wide-eyed
squirrel doing star jumps as a good dog
skateboards across a chessboard floor.

Below, in our world, bluebells shed
droplets from the afternoon rain.
Some other painter has scrawled
BRAIN DEAD on the cinder blocks
in whiteout. Springtime has made
the vacant lot a verdant embarrassment
of grasses for a low-down hound to lope
across, in love with her stick.