Each month, Dilettante Army’s editors choose an exhibit or art happening for resident poet Molly Jean Bennett to explore and describe. For February, they proposed a foray into virtual reality. Specifically, a Google Arts and Culture tour of the Singapore Art Museum viewed through a Google Cardboard headset. The tour features a 2015 exhibit called After Utopia: Revisiting the Ideal in Asian Contemporary Art. 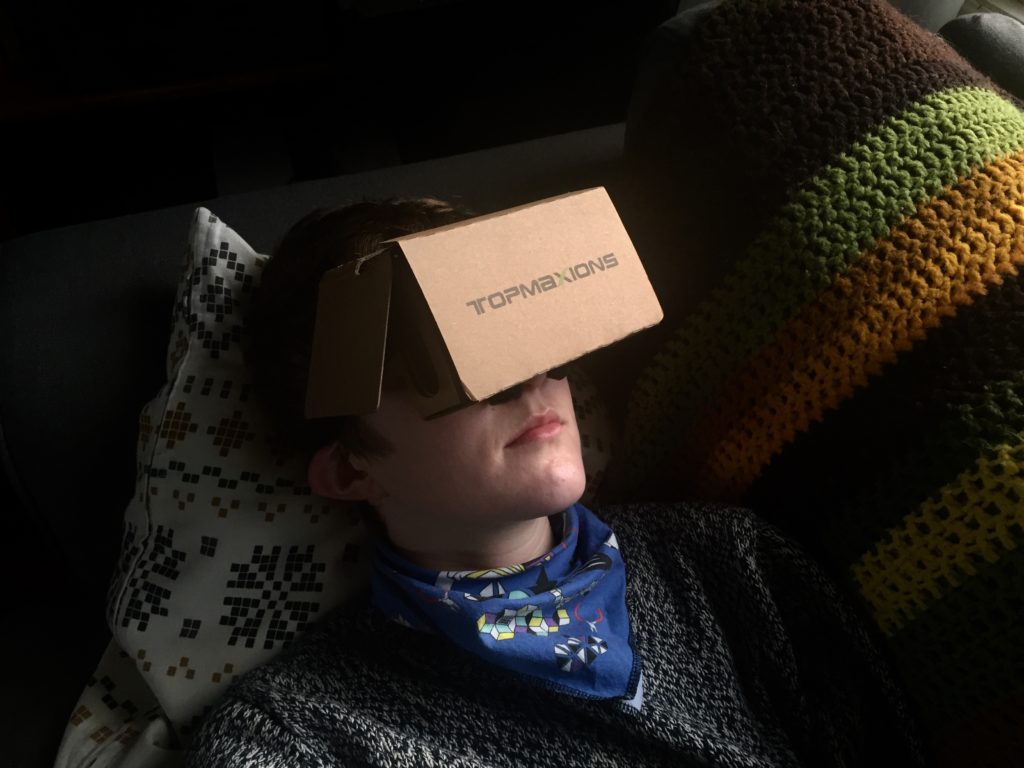 The poet on site in Singapore (virtually)

Our correspondent was excited to traverse faraway galleries in a small cardboard box strapped to her head. She ordered a headset on the internet. When it arrived, she folded it into position as per the instructions, downloaded the Google Cardboard app, and slipped her phone into the viewing slot. Then she affixed the whole contraption to her head with the velcro strap (provided) and entered the bright future of three-dimensional media. The poet was delighted by Google Cardboard’s intro tour of the app, which takes place within an animated arctic wonderland in which you can plant lupines in a meadow, fly over the ocean with a flock of terns, and watch a fox smile and waggle its tail. 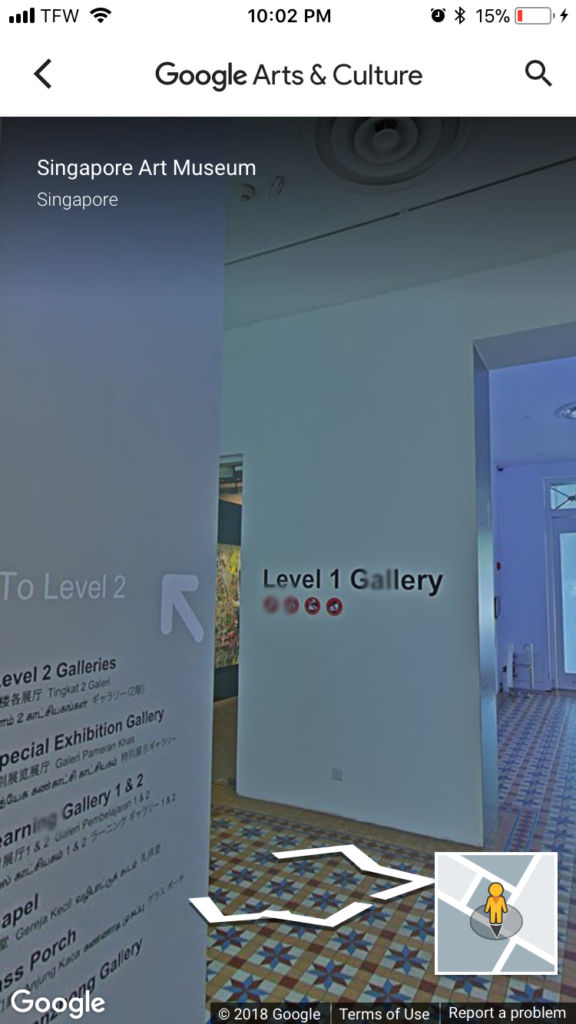 Then our correspondent attempted to view the Singapore Art Museum tour from the Arts and Culture app through the headset. It soon became clear that it was not possible to move backwards and forwards through the tour within the headset. So she removed the viewer and navigated the tour two-dimensionally on her phone, an experience that was not exactly seamless either. First she found herself stuck in the lobby of the museum, turning round and round until she set herself on the right course toward the gallery. Once inside, it was hard to find the best viewpoint. When she “stood” as far back as the tour would let her, it was hard to perceive any detail. Zoom in too far—the context was lost and the art pixelated. Finally, she navigated to a sculpture that looked interesting. She put the headset back on and attempted a closer look. 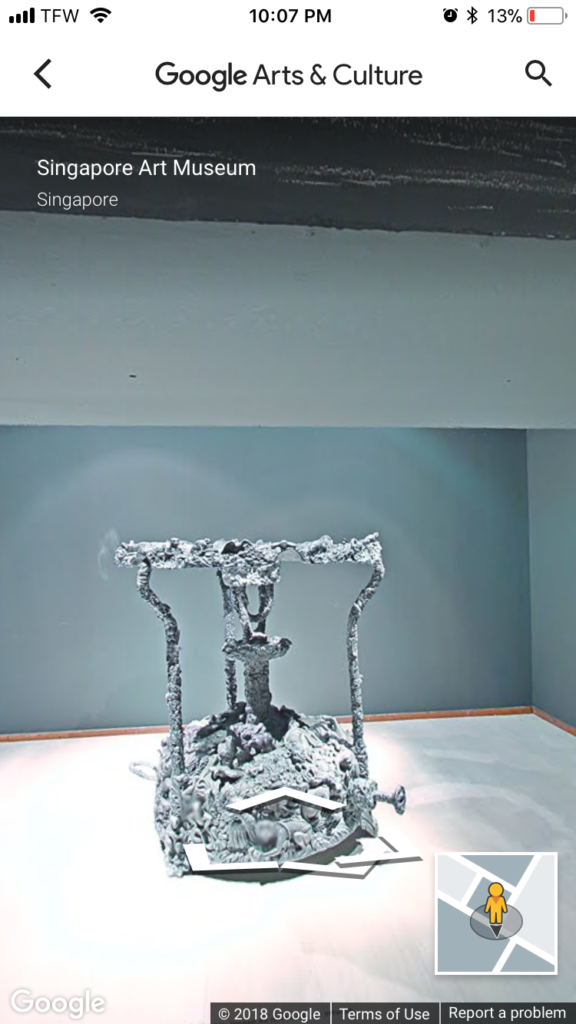 According to her later research, the work was Jitish Kallat’s Annexation. Of this piece, the artist has said:

I have been drawn to the sculptural frieze within the porch of the Chhatrapati Shivaji Terminus building in the center of Mumbai, lined with reliefs of animals eating something or occasionally consuming each other. This space sees a daily traffic of a few million people whose presence animates the imagery and imbues it with potency and meaning. This appropriated imagery has become graphemes or alphabets that allow me to articulate an ambivalent script of sustenance, survival, co-existence, and emancipation without essentially referring back to the source so that they then re-appear within my work in varied ways…I like to leave my processes wide open to allow an array of references and unannotated citations to shape a piece. I think finally it has to do with looking; to prolong the gaze and capture an emergent tale on the surface of something.[1] 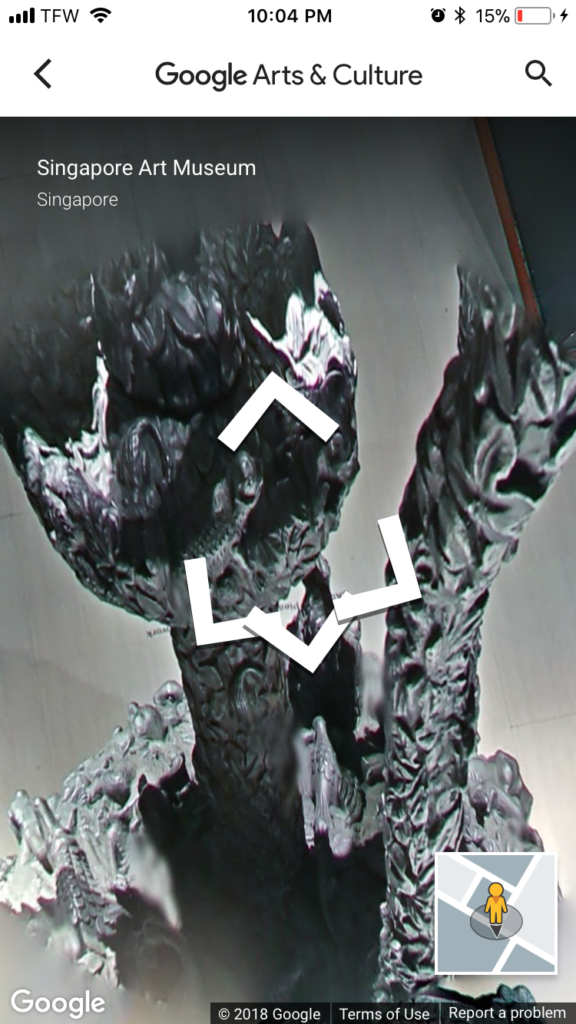 However, in her frustrated, disembodied viewing, the poet was unable to grasp this context. Here is what she wrote.

In the future the technology
will have advanced to such
a degree that it’ll feel just
like I’m here. I’ll see the fine
cracks on the tile floor and hear
the AC kicking gently on
and off and back on again.
There’ll be the faint hint
of animal fat frying
in the food cart outside
mingling with fresh white paint
on the gallery wall. But for now,
it’s just me on my bed
across the ocean, three years
in the future. I’m trying to glide

through the halls of the museum
like a low-budge pixelated ghost.
I make eight quarter-turns
to study the animals carved
into the surface of a sculpture.
and end up suspended above, not
quite flying or even hovering but
caught in the ceiling’s tonsils,
looking down to find everything
too close and rotating. No detail
just a shifting blur of gray
imitating dimensionality. First

there was the artist, yes, blending
lead, paint, steel. Then the photographer
with their spheric capturing orb.
There were editors too—
machines with minders to stitch, patch,
upload. And then me.

I want to feel infected
by consciousness in the way
Tolstoy meant but instead
the velcro slips and I collide,
misunderstand, grow bored.
By now I thought we would have
flying cars at least but instead
it’s these slender lighted boxes
that can take us anywhere, poorly.