I have been thinking a lot lately about the provenance of objects. I live New York City, so as I move daily through my urban environment, my field of vision is occupied almost entirely by manmade things. At home too I am surrounded. Where do all these objects come from? What do they mean? Sometimes it is easy to trace the commodity chain, to assign purpose based on functionality and familiar symbolism. Sometimes it is not so easy.

I have been thinking a lot about one object in particular. This one: 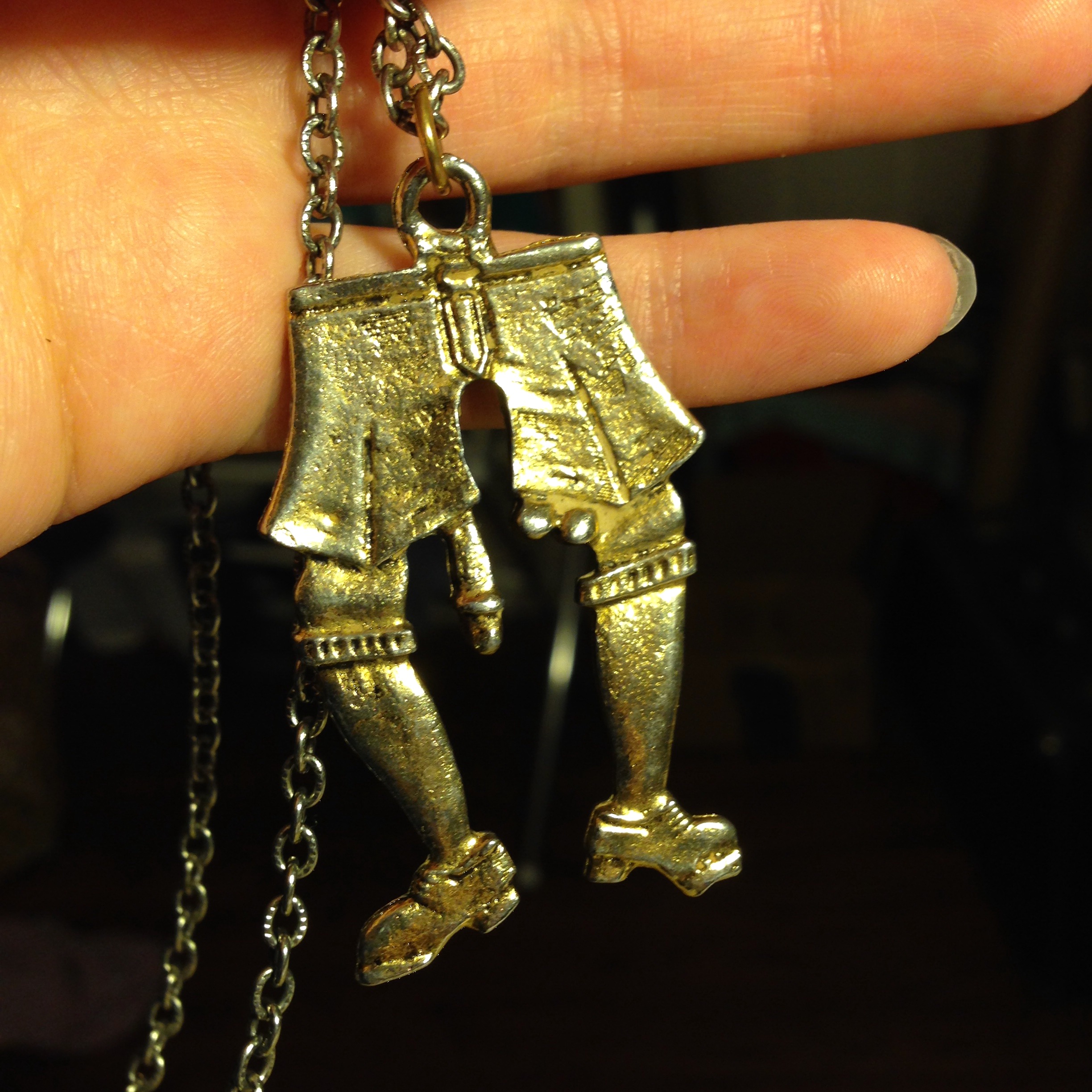 I found it on a table in the back lot of Happy’s in the spring of 2014. Happy’s was an indoor/outdoor antique mall and flea market on a strip-mall strewn road in Roanoke, Virginia, where I lived at the time. I loved Happy’s with a sort of conflicted devotion that I reserve for very few things: torrential rain, poems that wound me with their goodness, Colin Firth in certain early roles. At Happy’s, you could find Civil War surgical kits alongside auto parts and e-cigarettes. Also: handmade soap, vintage costume jewelry, bikinis printed with the confederate flag. Terrifyingly, there was a shop called “Whitey’s Knives.” On weekends, in the expansive back lot, a stand sold suspiciously cheap produce next to a food truck that sold the best tacos in town. On Saturday mornings, a regular crew of octogenarian musicians gathered on the benches in front of the music store to play old-time Appalachian tunes on fiddles and guitars and scuffed-up double basses.

Happy’s is no more. Last fall, the City of Roanoke mandated its closure after the management failed to make necessary structural repairs to the building, which, to be fair, seemed to primarily constructed from plywood, chicken wire, and garden hoses.[1] But on this day in 2014, the day I found the penis pendant, Happy’s was still very much alive.

I was walking the perimeter of the back lot, as I often did on Saturdays when I lived in Roanoke. What first drew me to the felicitous table was not the pendant, but a handsome leather camera case next to it. As I walked over see if a nice old SLR camera was tucked inside, I noticed the object next to the case. A small piece of flat metal attached to a chain. A disembodied pair of bowed legs in short pants. It did not require a second glance for me to spot what I consider to be the defining feature of the pendant: its genitals. Hanging from one side of the britches is a tiny penis. From the other side, a pair of testicles. 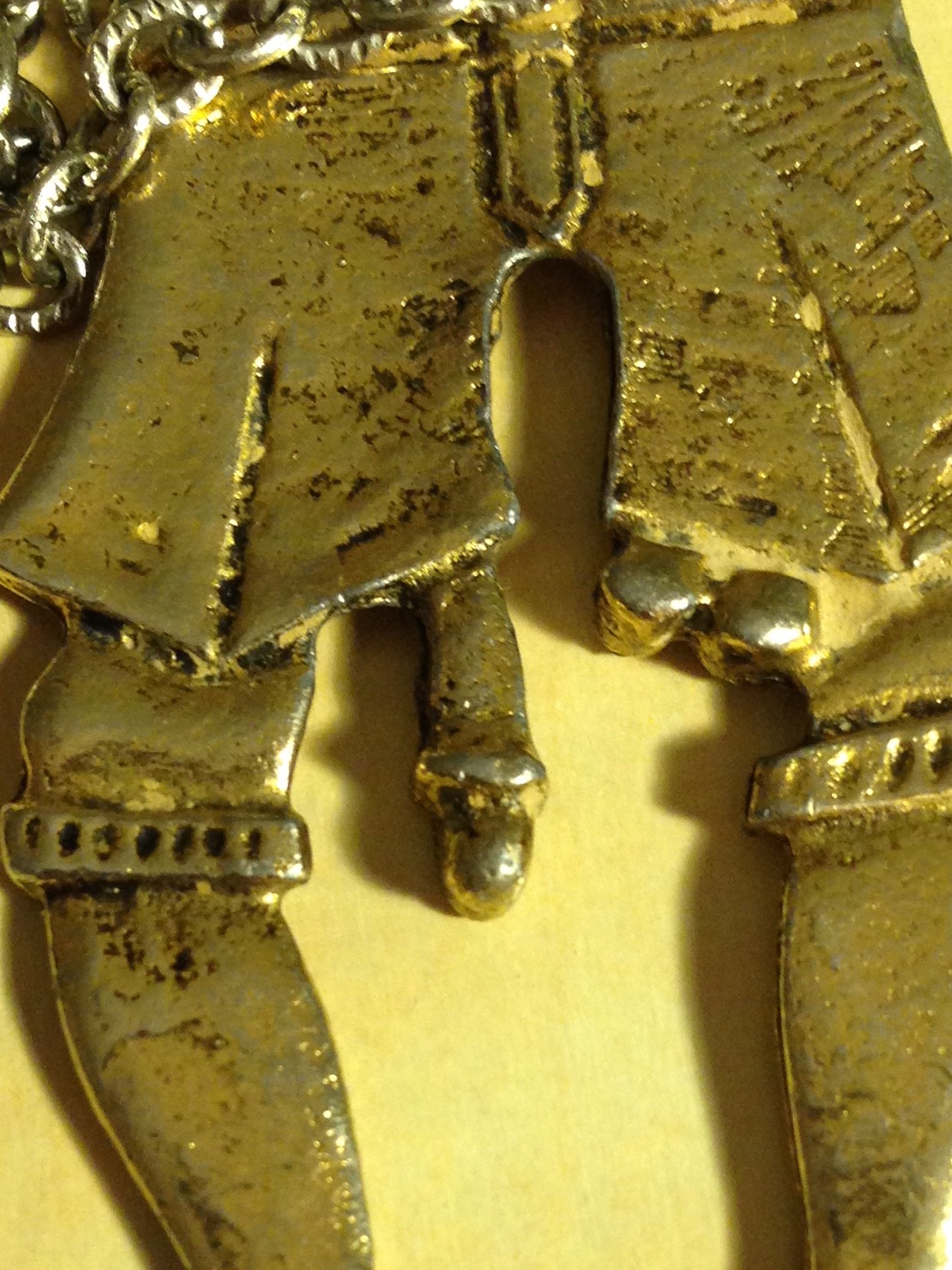 The moment I saw it, I had an idea of what it might be. The pendant’s size, simple design, and most of all its disembodied-ness, reminded me of votives, aka tamata aka milagros aka ex-votos—little pieces of flattened metal associated with healing in several corners of catholic folk culture. I grew up catholic, but votives were not part of the religious iconography of my childhood. Neither, certainly, were penises and testes. But while votives were absent from my native religious practice, I’d had a memorable encounter with them as an adult.

The summer before that morning at Happy’s, I had visited the Jasna Góra monastery in Częstochowa, Poland for the Feast of the Assumption. Jasna Góra is home to the Black Madonna icon, a wooden panel painting of mysterious early Christian origin known for its powers of healing and protection. 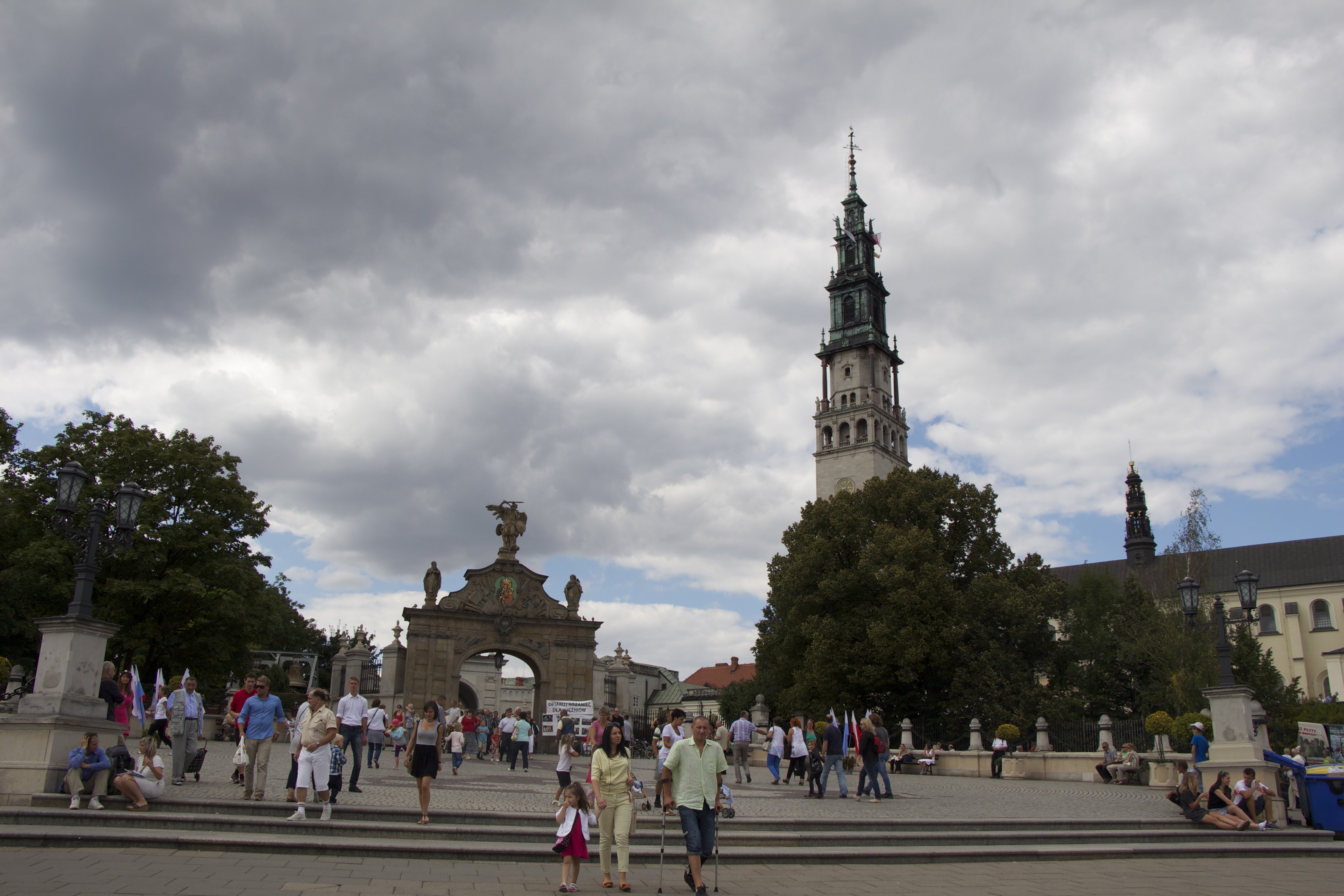 Jasna Góra is a vast complex with multiple sanctuaries topped with an impressive 106-meter bell tower.[2] As I was there during the national pilgrimage, an annual event in which church groups from across Poland arrive on foot to venerate the icon in a days-long series of masses and celebrations, the line to gain entrance to the chapel where the icon is displayed was particularly long. After waiting out in the courtyard for several hours, my brief minutes inside did not disappoint.

The icon itself felt almost familiar; I had seen plenty of pictures of it. What struck me most were the decorations occupying every other inch of wall space in the chapel. These were the objects that had been left behind by pilgrims: those who believed they had been healed by the intercession of Our Lady of Częstochowa, and those who hoped they might soon be. Crutches, braces, and slings, spanning many centuries of medical technology—from simple wooden staffs to modern adjustable aluminum models—had been fastened to the walls. Between them, glittering in the light of candles and electric chandeliers, hung thousands upon thousands of votives. Tiny metallic arms, legs, eyes, hearts, all imploring to be restored through Our Lady’s intervention. 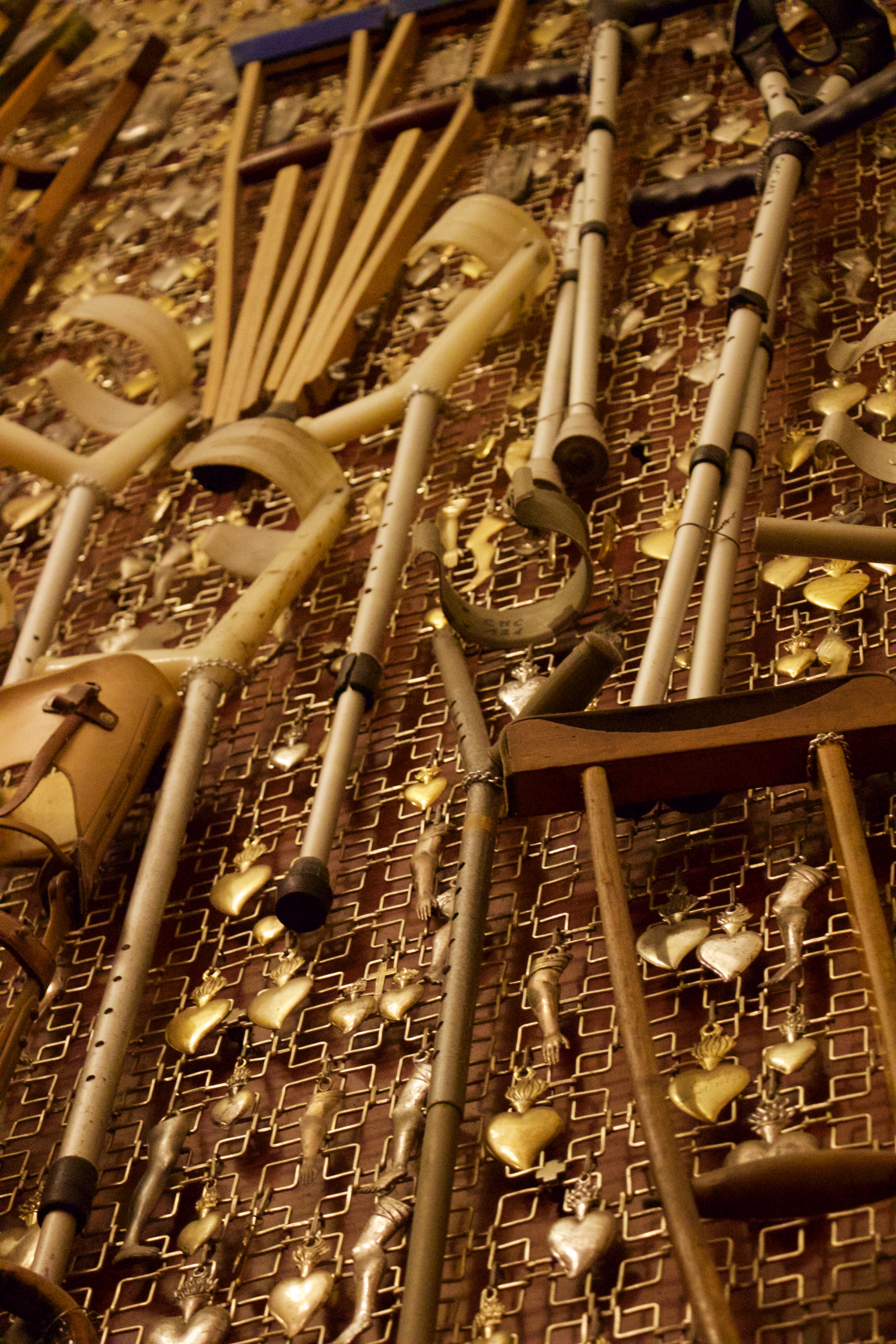 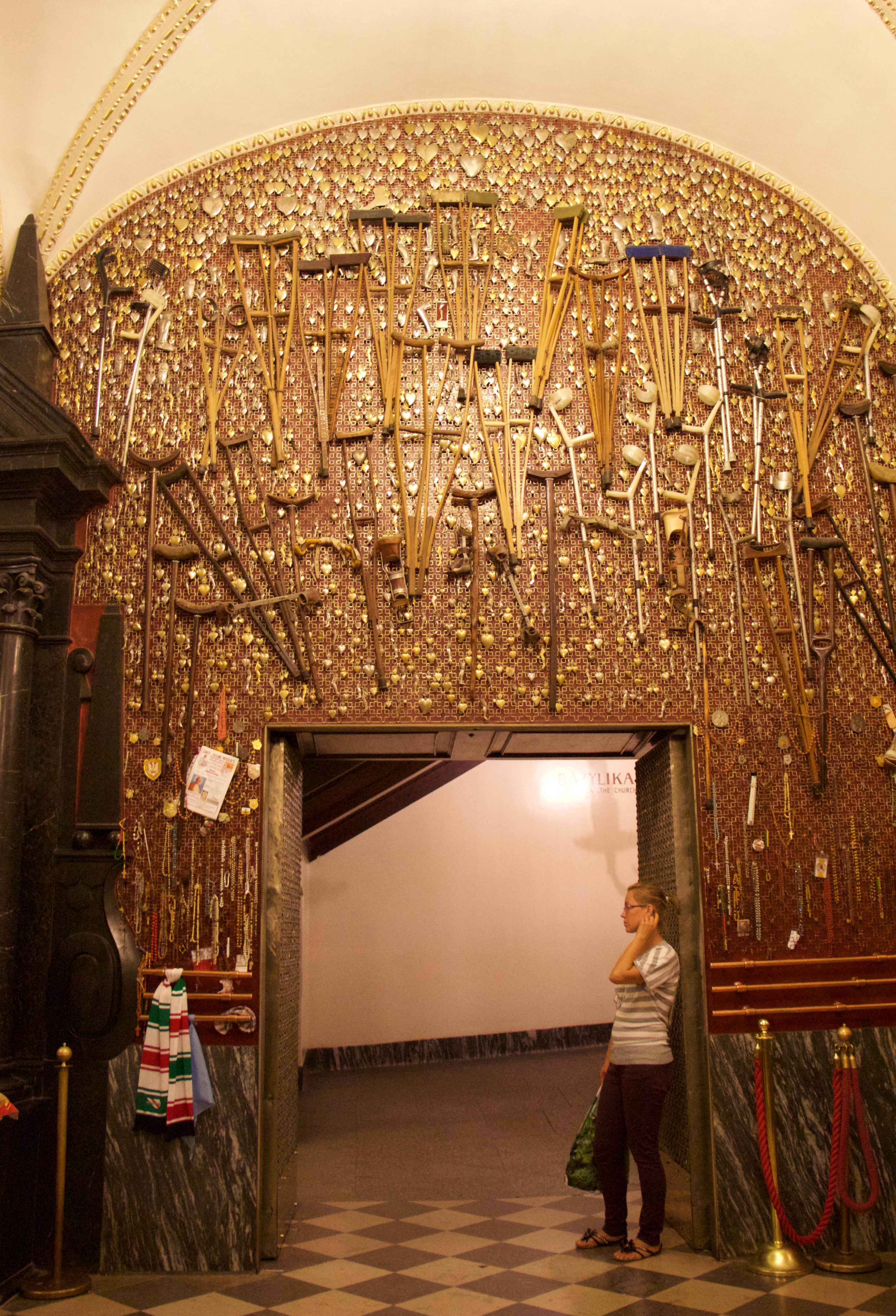 And so, when I saw those disembodied legs and their strange, protruding genitalia, some aesthetic response within me instantly made a connection. If I could return to that bright Saturday morning in the back lot of Happy’s, I would pause to interrogate that response. I would linger a moment longer to chat with the man who sold me the penis pendant. Where did this come from, I would ask. What is it? What does it mean? But that moment has long passed.

Now I am taking a closer look at my penis pendant. What, more precisely, are votives? What do they signify? Is this definitely one? In the years since I bought the pendant, I have proudly shown it off, speculating that it is made to correspond to prayers for the healing of impotence or genital warts or testicular cancer. But I do not know that for sure.

Votives. There meanings are multivalent, and their origins are multiple and ancient. Clay figurines of detached anatomical models such as arms, legs, and torsos with genitals have been found at peak sanctuary sites from the Cretan Bronze Age. They are thought to be offerings to local deities. These sanctuaries, which are found throughout Crete, were active largely between 2200 and 1650 B.C.E., and are “well-known for having a healing dimension.”[3] Archaeologists have noted that female genital nudity in these figures is unique within Minoan art, which “strongly suggests that…these representations are purposefully made to indicate, if not the symptoms, then certainly the location of concern or affliction.”[4]

The practice of making and using clay and stone anatomical votives was also prolific in ancient Greece and Rome from 400 BCE to 400 AD. While Hippocratic medicine was on the rise during this period, most people could not afford to visit a doctor. Instead, they made votive offerings of representational limbs and organs at temples dedicated to healing gods like Asklepios, thus “the two beliefs of healing divinities and Hippocratic medicine co existed within society.”[5] Gradually, the practice of offering votives was absorbed into Christianity as it spread through the region. It is probable too that some form of votive offering based on anatomical models emerged independently in pre-colonial Mesoamerica, but their historical record was so decimated by European conquest that it is impossible to deduce their spiritual or medicinal function.[6]

Modern votives, like the ones I saw at Jasna Góra, are still prevalent at pilgrimage sites and saint shrines in Italy, Crete, Greece, Sicily, Spain, Portugal, the Philippines, and Mexico. While generally associated with healing, their meaning is not exactly fixed. Votives and milagros (“miracles” in Spanish) may be offered as a prayer request to a saint, or in thanksgiving for a prayer that has been granted. Votives shaped like hearts—among the most popular offered to Our Lady of Częstochowa—might signify a heart condition or, alternatively, concerns of love and romance. Similarly, “a leg could mean arthritis or traveling.”[7]

I wrote to Emily Evans, a London-based medical illustrator who researched votives for her dissertation. Evans was an artist in residence at the Morbid Anatomy Museum in Brooklyn in 2014. Her work there was specifically concerned with anatomical votives, which is to say any votive that depicts a part of the body (as opposed to inanimate objects or whole figures kneeling in prayer). In one of the happiest emails I have ever had occasion to write, I asked:

Given your experience with anatomical votives, have you ever seen one like this? Any idea why the penis and testicles are depicted as dangling from either side of the pants? I haven’t been able to find many examples of votives depicting male genitalia. Part of me wonders if this one is some kind of joke.[8]

I attached a picture of the pendant. A dick pic, if you will. I waited for Evans’ response. Fortunately, she was prompt. She wrote:

I belief is that it is not a votive used for healing in the same was as the anatomical votives I have researched. My main reason for thinking this, is that I’ve not seen one with clothing on before. This makes me think you suspicions may be correct in that it is more of a novelty item than a religious talisman.[9]

The britches! I hadn’t fully considered the possibility that my pendant was not a votive at all. So by the power of a single email, it was transformed from a sacred healing object with ties to ancient Mediterranean shrines to gag gift with no more significance than Truck Nutz. Which is not to say that Truck Nutz lack meaning; I am sure there is much to unpack regarding how Truck Nutz make explicit the link between masculinity and the fetishization of automobiles in U.S. American culture. But that is a think piece for another day.

For the last few months, I have carried the penis pendant with me, in my coat pocket or in my backpack, in case I should miraculously happen upon the person who can explain it to me. One morning on the way to work, I walked into a jeweler’s shop at the corner of Lexington and 83rd street. I wanted to appear serious and unflappable—unfazed by naughty bits—but I am fairly certain the man behind the counter could read the preemptive embarrassment on my face. I handed him the pendant; I asked him if he might take a look and tell me what it was made of, and whether he had seen anything like it before. Already, his expression conveyed that I was wasting both of our time, but he obligingly donned his loupe and inspected it.

“It is nothing,” he said after several seconds. He elaborated only slightly. My pendant was nothing, he repeated. Cast metal. Mass-manufactured. Not old. Not valuable. Nothing.

I have also been inquiring in any antique shop I happen to pass by. So far, there has been no positive ID. Bemusement, yes, and a repetition of that small, unwitting sense of humiliation on my part. It’s as if I have been walking around asking strangers to appraise my pair of Truck Nutz. Only Truck Nutz, at least, are part of a recognizable phenomenon. Their provenance, I imagine, is not so hard to discover.

Perhaps it is not so strange: when I decided to look more closely at an object in my possession, it became more obscure. Our assumptions often cloud our vision, but removing those assumptions does not always help us see more clearly. I will keep looking. I still want to know more about this tiny disembodied penis buried deep within my coat pocket. It carries me at once to Happy’s and Jasna Góra and, yes, somehow it manages to fill me with a vague sense of Catholic sexual shame.