In the 16th century, the practice of collecting became popular among the Italian élites, and it quickly spread to the rest of Europe. Collections of exotic specimens, ethnographic materials, natural wonders, and antiquities were displayed to showcase the owner’s wealth, his erudition, and his mastery of both the natural and the artificial world. Since the collection of wonders was mostly practised by the upper classes and the wealthy, only selected few could have access to private collections. Nevertheless, two important factors contributed to widen their audience. First: since some Kunstkammern were fitted with laboratories, workshops, botanical gardens and libraries, they began to attract the interest of botanists, amateurs, and instrument-makers who could now cooperate on common projects and contribute to them with their own expertise. Secondly, early English museums became part of a scheme to produce public knowledge.[1] The Ashmolean Museum (1683) in Oxford was a manifestation of this trend: it was fitted with a theatre for public lectures, and it was open to anyone who could pay the entrance fee. The idea that anyone, regardless of their social status, could have had access to collections by paying was a novelty at this time, and it evoked remonstrations from aristocratic visitors. These changes were fundamental, as they moved collections from a private space to a public one. With this context in mind, let’s use four objects (a dragon, feetless paradise birds, a clockwork peacock, and a Handstein) to explore what each of them reveals about the colorful world of Cabinets of Curiosities.

In 1572, on the day the new pope took office in Rome, Italian collector Ulisse Aldrovandi found a dragon lying dead in the countryside of Bologna. The scholar had it displayed in his famous collection, and the dragon soon became a real sensation. Aldrovandi hired an artist to illustrate it, wrote a Latin history of dragons in which his own find represented a substantial case-study, and began a correspondence on the topic with other learned gentlemen across Italy. 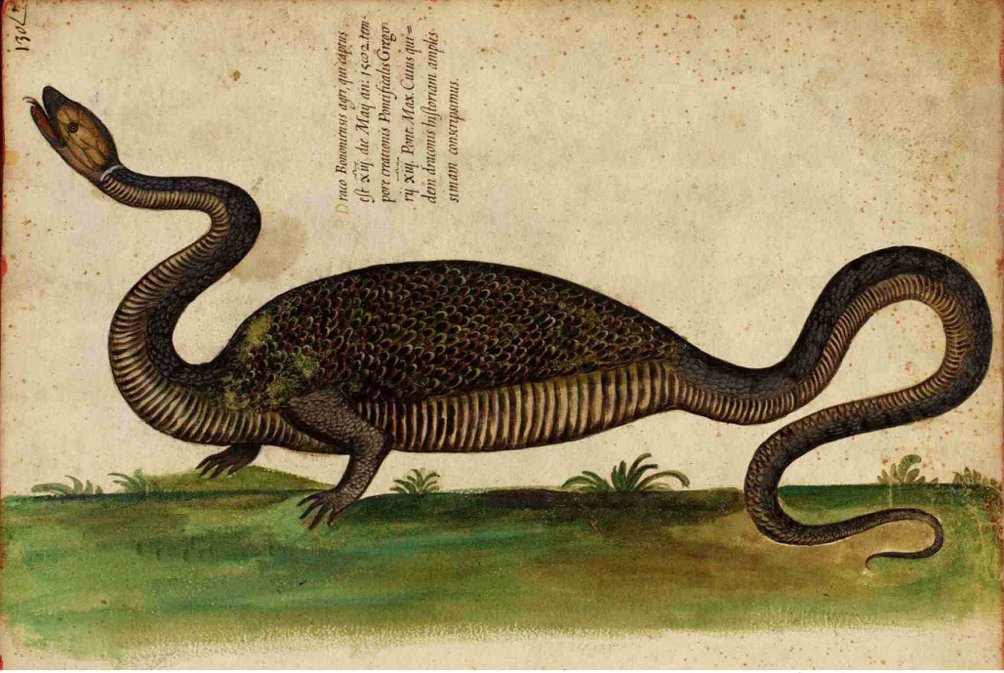 The resulting treatise, the Serpentum et Dracorum Historiae, is interesting for the modern reader for several reasons. Unlike the zoological publications we are acquainted with, this natural history of dragons included not only an overview of dragons and of their kin (such as hydras and basilisks), but also instances in which the term “dragon” had been used figuratively. Aldrovandi’s book also included plants, foods, family crests, and proverbs which contained the word “dragon.” This broad overview was necessary for the scholar to establish himself as an authority in the field of dragons, conferring value and legitimacy to his claims about the characteristics of the creature displayed in his cabinet.[2]

Aldrovandi’s dragon is an excellent case study in the character of 16th century cabinets of curiosities. As you will already have noticed, the way he approached the study of his find contained a mixture of fantastic elements (most notably, a non-existent creature assembled by a taxidermist)[3] and practices which are nowadays considered scientific, such as the collection and display of the specimen, the writing of an accurate account containing a description, and the exchange of information with a community of experts.

The tension between the fantastic and what can be empirically observed is a recurring feature of cabinets of curiosities, and the feetless paradise bird, a very popular object found in cabinets and Wunderkammern, perfectly embodied the elusiveness of this boundary. According to European sources, paradise birds lived in perpetual flight, sustained by their soft plumage, feeding (according to some accounts) only off air and sunlight. When (dead) paradise birds were imported by merchants to be displayed in European cabinets, their feet were chopped off to perpetuate the legend. 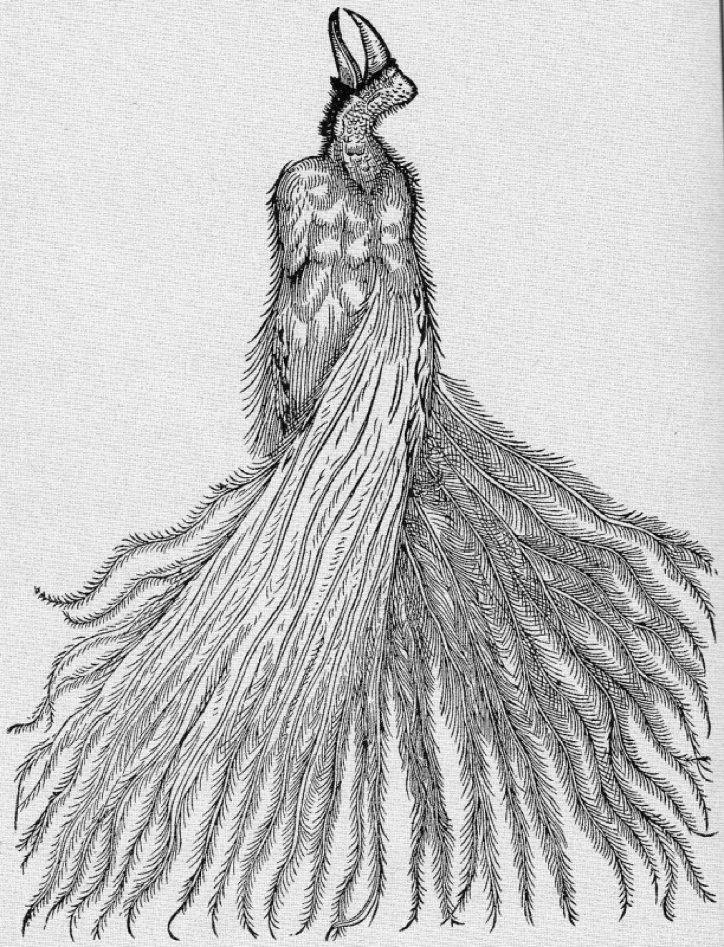 The way in which reality and fantasy coexisted in cabinets of curiosities tells us something about the malleability of 16th century classifications of the natural world. Let us take for example Conrad Gessner’s (1516-1565) Historiae Animalium, an encyclopedic work attempting to record all known species of animals. In the Historiae, depictions of animals are accompanied by a few descriptive paragraphs, and nowhere does the understanding of the natural world appear more different from ours than in the picture below, where a unicorn and a rat are depicted side by side. 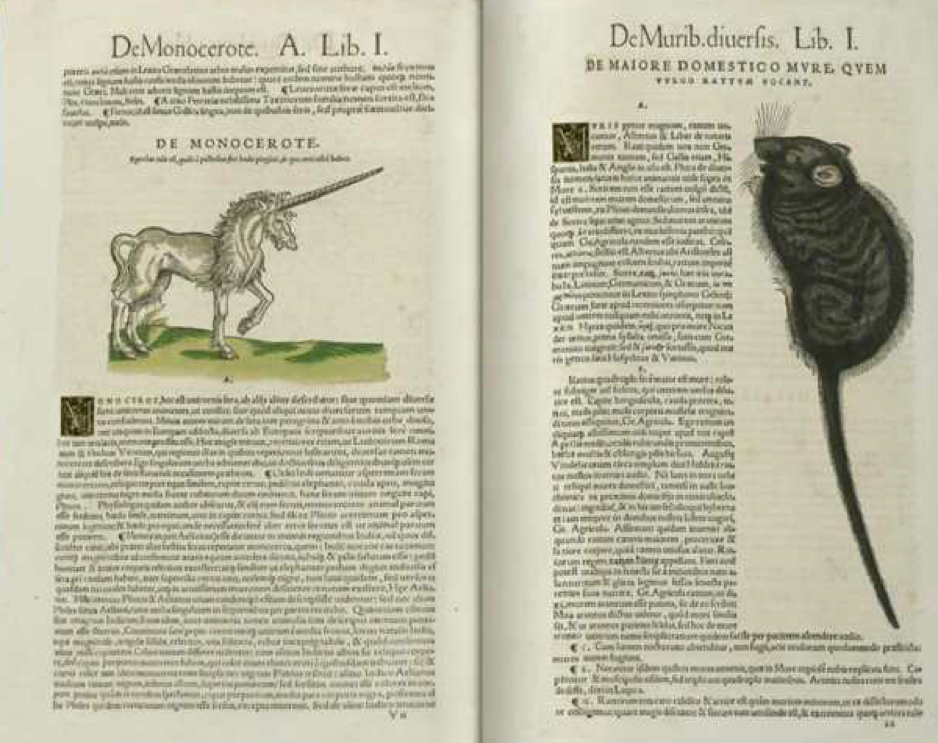 The Historiae and its beautiful illustrations can be browsed here

The descriptions of the animals retain a continuity with medieval bestiaries, since they include not only the physical characteristics of the creatures but also their utility to human beings, their place in the divine creation, and their symbolic value.[4] It is in virtue of such symbolic value, as opposed to a belief in its existence, that the unicorn is inserted in this work. Ulisse Aldrovandi’s General Natural History of Animals was permeated by similar concerns: the habits, diet, culinary qualities, medicinal properties, and mythological appearances of each creature were all part of what was considered to be worth knowing about an animal. His description of the stingray is just one example of the eclectic information contained in this work: the stingray, Aldrovandi wrote, “can harm whoever attempts to attack it by injecting a powerful poison. It enjoys music, dance, and clever talk.”[5]

If the manipulation of paradise birds demonstrates that reality and fantasy blurred into each other, it also testifies to the absence of a fixed divide between the artificial and the natural. Indeed, it is the interaction between these two worlds that cabinets sought to explore. Contemporary alchemical theories were heavily based on the reciprocal relationship assumed between mankind (the microcosm) and the natural world (the macrocosm), and these ideas were manifested in the heterogeneity of the collections: Greek statues and ancient coins were displayed alongside rare plants which arrived from the New World, precious shells were artificially decorated, and minerals were inserted into elaborate golden structures. The eclectic range of materials contained in cabinets and Wunderkammern constituted a veritable “theatrum mundi,” a display of samples of all that existed in the world, gathered in a limited space.

The Clockwork Peacock of Rudolf II

Rudolf II of Prague is perhaps the most famous collector of all time. His collections were spread over purposefully-built galleries, and they had been assembled over several years before being looted and dispersed in 1618. The objects contained in the Wunderkammer did justice to its name (“chamber of wonders”): they included a vast zoological collection, minerals, and paintings, as well as the infamous and enormous Devil’s Bible (90x50x22cm), written overnight by a 12th century monk who had struck a deal with the devil (it has been calculated that, had the codex truly been written by the same person, it would have required the equivalent of twenty years of uninterrupted work to be completed). Among the objects was also “ein uhr oder rederwerckh, ist ein pfaw, geht und wendt sich rinsumb, schreit und macht eine wannen mit seinem schwaiff von rechten federn” (a clock or mechanism, is a peacock, walks and turns around, calls and makes a fan with its tail of real feathers).[6] There are no surviving images of Rudolph II’s clockwork peacock, but here is a video of a 17th century peacock clock, made by James Cox and given as a present to Catherine the Great of Russia.

To understand the significance of this object, we need to take a few steps back. As it will be clear by now, there were no fixed criteria according to which collections were assembled: they were the product of the individual taste of the collector, or they were compilations of objects considered fashionable at the time. Nevertheless, as demonstrated by the term Wunderkammer, the concept of “wonder” recurred. In the 17th century, the definition of an object as a “wonder” (be this a two-headed animal or an exotic plant) encouraged natural philosophers to explore the order of nature and seek to determine its laws.[7] In this period the concept of wonder was expanding to include scientific objects and mechanical marvels such as microscopes and air pumps, which were displayed in cabinets for the visitors to interact with. Although elaborate mathematical and mechanical instruments had often been displayed in noble circles, where they were valued for their ingenuity and aesthetic appeal,[8] it is at this point in time that the display of scientific instruments came to be seen as beneficial for the production of knowledge. Collections played a crucial role in the development of empirical practices in natural history and natural philosophy.[9] Cabinets of curiosities, Wunderkammern and early museums encouraged the interaction of natural philosophers, learned gentlemen, and amateurs, reducing the distance between the theoretical philosophising of university-trained scholars and the practice-based approaches of artisans and amateurs. 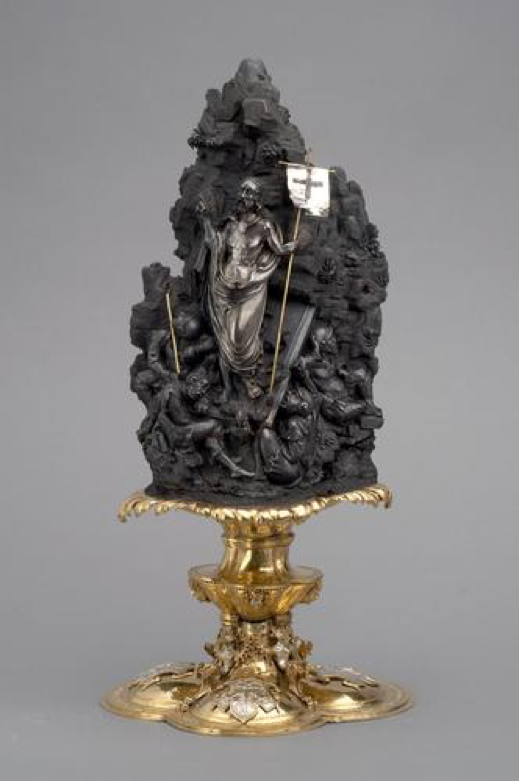 As an established practice among the élites, as well as a means of social elevation among the middle classes and the lower nobility, collecting had important political implications. These are manifest in the tradition of manufacturing Handsteine, elaborately engraved metals which were an important feature of 16th and 17th century cabinets. Drawing on the cultural resonance of the metallurgical tradition in Germany, German princes would collect and display different kinds of ores in their cabinets, drawing on the symbolism of specific metals as well as on the economic wealth derived from mining.[10]  By the end of the 17th century, visits to mines had become a common activity for noblemen and princes. Handsteine made of local metals embodied the sovereign’s political and economic control over the natural resources of his territory.  The symbolic link between minerals, political control, and the domination of the natural world is perfectly summed up by Anselm Boethius de Boodt, court physician and alchemist, who described Rudolf II’s interest in stones:

The Emperor is a lover of stones, and not simply because he hopes thus to increase his dignity and majesty, but through them to raise awareness of the glory of God, the ineffable might of Him who concentrates the beauty of the whole world into such small bodies and in them unites the seeds of all other things in creation.

Rudolf’s interest in collecting is aimed not only at glorifying the diversity of the creation, which can be observed in the complexity and beauty of the minerals, but also at increasing his own “dignity and majesty,” an overtly political purpose.

The connection between gaining knowledge of the natural world and the increasingly dominating nature grew stronger in the 17th century. It is now mostly associated to the work of Francis Bacon, who argued in his Novum Organum that, through the study of nature, the “empire of man over creation” could be established. In this context, a universal museum containing and displaying materials coming from all over the world would have allowed an aristocrat “to become an ideal monarch and to control all the secrets of the world.”[11] Bacon’s words show that curiosities were coming to be valued not only in virtue of their aesthetic appeal but also because empirical knowledge could be gained from them. That knowledge could then be exploited to achieve a better control of natural resources.

These four objects demonstrate the scope of cabinets of curiosities. Aldrovandi’s dragon and the feetless paradise bird locate early museum collections at the border between fantasy and natural philosophy, highlighting a tension between imagination and observation. Rudolf II’s clockwork peacock gives insight into shifting notions of “wonder,” the inclusion of mechanical instruments in such category, and the development of empirical practices in the context of the Wunderkammer. Finally, the manufacture of Handsteine demonstrates the political and symbolic purposes of collections, as well as the emerging parallel between displaying and controlling nature.[12]

[4] Special thanks to Dr. S. Waring for her notes on Gessner’s Historiae Animalium.

[12] For those who would like to read further on this topic, I highly recommend Thomas Browne’s Musaeum Clausum, an imaginary inventory of a 17th century cabinet and Daston and Park’s Wonders and the Order of Nature, which traces the evolution of the concept of “wonder.”