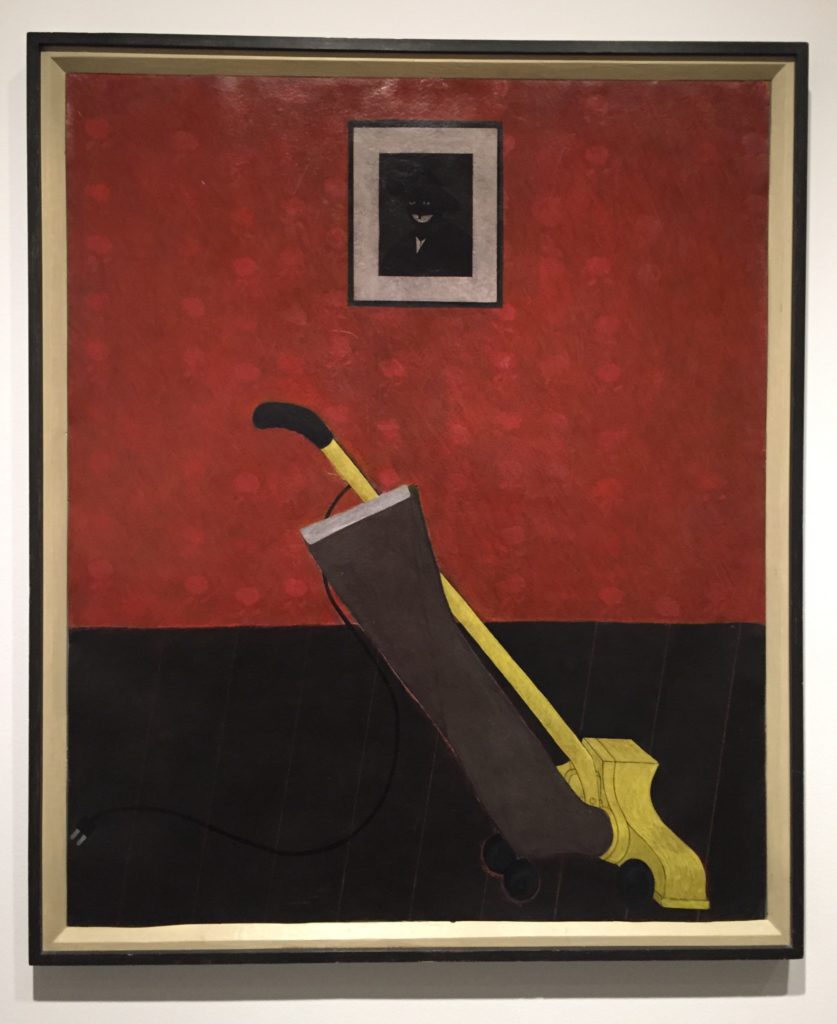 Kerry James Marshall, Portrait of the Artist & a Vacuum , 1981. Photo by Dilettante Army.

The Monthly Ekphrastic is a new column that explores the intersection of poetry and visual art. Each month, Dilettante Army’s editors will choose an exhibit or art happening for resident poet Molly Jean Bennett to address in a poem or short series of poems. This month, Molly is joined by poet, essayist, and film critic Natasha Oladokun. They have both written a poem in response to Kerry James Marshall’s Portrait of the Artist & a Vacuum, which was displayed as part of his recent retrospective at The Met Breuer. The exhibition, called Mastry, finished its New York run in late January and will open at the Museum of Contemporary Art in Los Angeles in March.

Mastry includes 72 works spanning 35 years of Marshall’s diverse and prolific career. Marshall is an ardent student of art history, and his paintings burst with visual references to Renaissance frescoes, Flemish portraiture, American realist landscapes, etc. Called “a sumptuous symphony in black,”[1] Mastry chronicles Marshall’s effort to insert complex representations of people of African descent into the Western fine art record. His subjects are rendered in a deep, absolute black—that is, black paint  “into which not a drop of white is added.”[2]

Portrait of the Artist & a Vacuum, which Marshall finished in 1981, reproduces one of his earlier works in the context of a larger scene. The framed picture on the wall above the vacuum cleaner appears to be Marshall’s 1980 painting A Portrait of the Artist as a Shadow of His Former Self. According to Mastry’s wall text, Marshall drew his inspiration for the painting from Ralph Ellison’s 1952 novel Invisible Man. “Everything changed when I made that painting,” Marshall has said of the work. “The person that I was in 1980 was really starting to understand how you could start with a premise and see it all the way through. What I wanted the work to be able to show, over time, is that it was possible for the image of the black figure to evolve.”[3]

You can also view Portrait of the Artist & a Vacuum and read more about it on the website of The Nasher Museum of Art at Duke University.

Portrait of the Artist & a Vacuum

Beloved, the work is never done.
The day’s close at hand, mottled,
rheumatic as grizzled memory—
like the hard sleep that is as much
a stranger as we are to ourselves.
Perhaps it’s true after all. Evening’s
burnt composition is all we have
to take into night’s austerity, half-
cocked grin of a moon we know
always is and isn’t what is seems.
Don’t look at me like I don’t mean it.
There’s more than one way to be
invisible—and still, fused to you
(and always you—who else but you)
I do not know what else to beg for
than refuge in your own rich darkness,
to hide myself in myself, like a cypher.
Love, who will unhang us? Dust-swept,
but untouched, after all we’ve created
is brushed off stroke by stroke, the room
cleared of any trace of living, save this
blocked-up shrine for you, O familiar.
If not our beauty, let us glory ourselves
in our un-ebbing, though there is no rest
for us, though we do not know when
mercy’s cord will snap.

Here is the room that is always just emptied,
two thirds red wall, one third black floor.
Here the vacuum leans as if propelled
by desire,                    dustbag puffed proud
like a policeman’s chest. Here the cord
pulls the plug with two pearly teeth
like the teeth in the frame above. Here
is your face, your hat, the night—black
on paler black. You look not down
at the clean, spare boards but up, out,
beyond. Here your smile and eye-whites
dare me to forget: my ancestors tried
to absorb your light, and worse. Tracked
our dust on your floor, and worse. And worse.