Each month, Dilettante Army’s resident poet interprets a work of art via the blunt instrument we call human language. Having recently moved from New York City to Portland, Oregon, our poet would like to be as obnoxious as possible in pointing out the superiority of the landscapes. So much so that she has chosen to address Albert Bierstadt’s romantic depiction of Mount Hood for this month’s column. The painting is currently on view at the Portland Art Museum.

Bierstadt, who was a member of the Hudson River School, travelled throughout the western United States with surveying parties to make sketches of landscapes which he later painted at greater scale in his studios in New York and London. This work was completed in 1869, and it exaggerates features of landscape in a style that was common at the time.

As the Portland Art Museum’s wall text notes, the composition was “designed to give urban viewers a sense of place rather than a realistic record of a particular location…Mount Hood is painted as though seen from the northern shore of the Columbia River and Multnomah Falls, but the profile of the mountain is actually the one seen from Portland.”[1]

Bierstadt, who enjoyed popular success and was quite adept at self-promotion, was not without detractors. Some criticized his use of exultant light as excessive, and one reviewer called him a “vast machinery of advertisement and puffery.”[2] By the end of his life, Bierstadt’s style had fallen out of fashion entirely and he died in relative obscurity.

Long after his death, art historians would categorize Bierstadt’s style as “luminist.” The term first appeared in the mid-twentieth century to describe the dramatic lighting, concealed brushstrokes, and grand scale of U.S. American landscape paintings created from 1850-1870. Later, other art historians would snit back and forth about whether luminism was an a-historical term inextricably linked to “ideas of Emersonian transcendentalism, national exceptionalism, and ‘purity’, well suited to the Cold War era.”[3] So it goes. 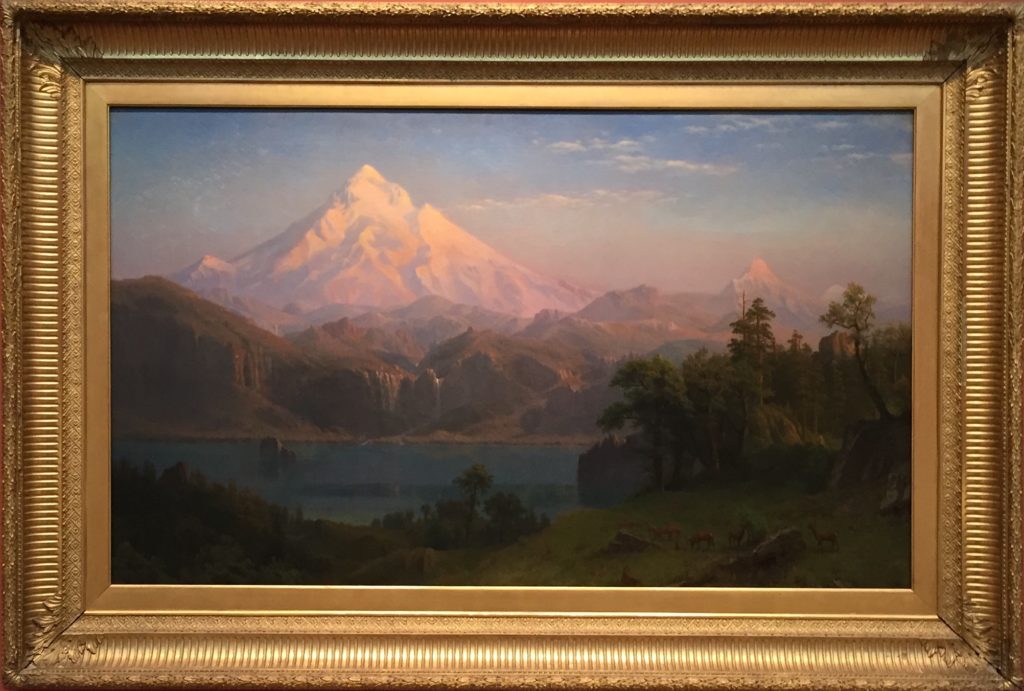 Spiritual Desperation as a Landscape Lit With Impossible Light

Were it a religion or at least a lifestyle
I would like to be baptized into Luminism.

And who, Sister Molly, do the Luminists
worship? Why they worship not a who
exactly but an over-large mountain with
monstrous breasts and buttocks all gleaming
in the morning light and all that comes with it.

And what, Sister Molly, would you say is the
creed of these Luminists? Why it is difficult
to distill in language but goes something like this:
the summer’s first daylight as it hits the top
of the waterfall and then spreads everywhere.

And when, sister Molly, do the Luminists
pray? Why it’s after the storm and just before
dusk or just after dawn when light pours
from every orifice and there are not (no, never)
small winged things that bite and sting.

And where, Sister Molly, do the Luminists
baptize themselves? Why they do it
in the great composite lake by
the forest by the clearing filled with deer.

And why do you follow? It is light, light,
light. And how? With light. And light.