Memory and Youth Work: The Politics of Military Cemeteries in Germany

“I see nothing wrong with visiting that cemetery, where those young men are victims of Nazism also, even though they were fighting in German uniform, drafted into service to carry out the hateful wishes of the Nazis.”[1] This was Ronald Reagan’s response when, in 1985, he was harshly criticized for his imminent visit to a German military cemetery in Bitburg. The Reagan administration claimed to have discovered only after the visit had already been organized that some among the 2000 casualties buried there were members of the SS. The Jewish community voiced its outrage: Elie Wiesel, the US Holocaust Memorial Council Chairman, was clear in stating that “our pain is genuine, our outrage is deep and our perplexity is infinite.”[2] The cemetery visit, part of a state visit to celebrate the 40th anniversary of the end of the hostilities between Germany and the US, finally took place on May 5, after a stop at the Bergen-Belsen concentration camp had been added to the President’s schedule.

The Bitburg Controversy exemplifies two strong and contrasting trends in the relationship between Germany and its past: on one hand a strong desire for reconciliation, and on the other a concern that the divide between victims and perpetrators of the atrocities of the Third Reich may be elided in the process. In the case of the Bitburg visit, these two aspects were brought to the forefront, leading the founder of the International Network of Children of Jewish Holocaust Survivors (INCJHS) to declare their fundamental opposition: “President Reagan and Chancellor Kohl have embarked on a macabre tour, an obscene package deal, of Bergen-Belsen and Bitburg….Today we say to them that they can either honor the memory of the victims of Belsen, or they can honor the SS. They cannot do both. And by entering Bitburg, they desecrate the memory of all those who were murdered by the SS, and of all those whom they pretended to commemorate here at Belsen.”[3] 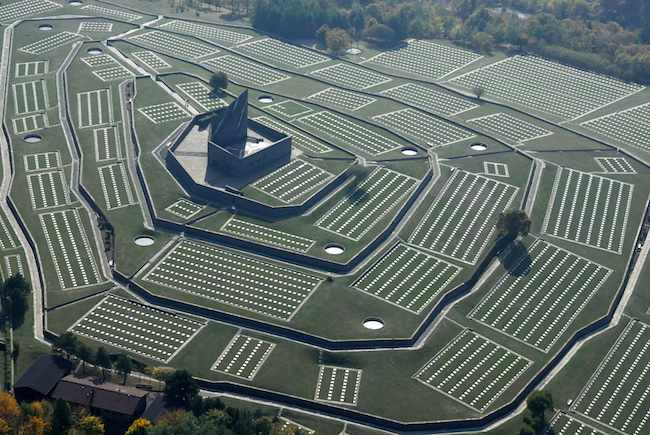 Futa Pass Cemetery, northern Italy, where the remains of 30.000 German soldiers have been interred. Image via Lodole

The situation of military memorials in Germany has changed substantially since the end of the World War II, but the same concerns over how memorials may lead to the erosion of the divide between victims and perpetrators often resurface in public debate in Germany. In the edited volume Memorialisation in Germany since 1945, an entire chapter is devoted to the controversial past of the Volksbund, the German War Graves Commission. [4]  The Volksbund is charged with the maintenance of WWI and WWII German military cemeteries wherever they are in the world. It is also responsible for the official commemorative activities on Germany’s Remembrance Day, and it organizes international youth camps and events attended by thousands of young people every year. As scholar David Livingston explains in the chapter, the history of the association is intertwined with Germany’s National Socialist past. The Volksbund was founded in 1916, and in the period after the Great War its monumental cemeteries contributed to the cult of the fallen soldier, celebrating the German heroes who had sacrificed their lives for the Motherland. Today, the visual rhetoric of the cemeteries is partially reminiscent of such ideals, although Nazi symbols have been removed, together with the inscriptions “Germany must live even if we must die.” The name of the Graves Commission itself carries strong political implications: the word “Volk” (People) was associated with notions of racial supremacy in Nazi Germany. (“Volk” indicates the superior German “race” rather than the more neutral “people”) Indeed, much of the Volksbund staff was initially composed of disillusioned war veterans and right-wing activists, and this rather conservative management was maintained until after the end of WWII. In the 1960s, under Willy Brandt’s center-left government, the overarching narrative of bellicose nationalism embodied by military cemeteries was amended toward a message of reconciliation which remains the official stance of the association to this day. 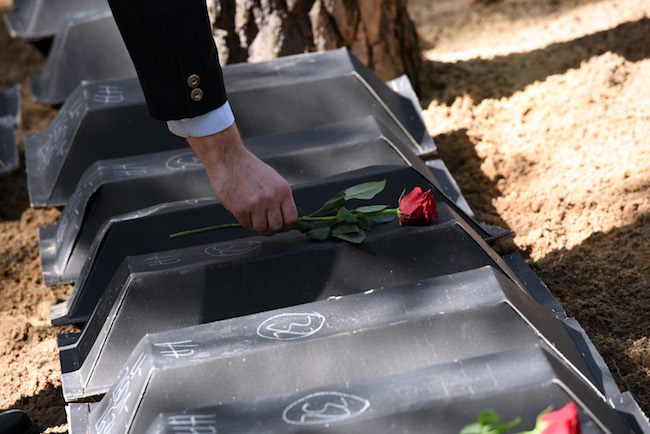 Livingstone’s article has a lot in common with the uncompromising message contained in the declarations of the INCJHS founder mentioned in the beginning of this article: despite the changes implemented in recent decades, the Volksbund’s National Socialist past fundamentally disqualifies it from having a say in matters of memorialization, and military remembrance can become a means of covering up crimes and protecting the perpetrators. Despite the efforts made by the Volksbund to amend its narrative and distance itself from a controversial past, the very concept of a military memorial remains ambiguous in contemporary Germany, and the German War Graves Commission has often attracted the attention of the press for unflattering reasons. The Volksbund military cemetery of Costermano (Italy), for example, was at the centre of a diplomatic clash in the 1980s when it was discovered that the developers of the Third Reich’s euthanasia programme were buried there and included in the book of honor. When Italy demanded exhumation and removal, the Volksbund refused to proceed. The incident resulted in the resignation of the German Consul General in Italy, Manfred Steinkühler, who quit the position while accusing the Volksbund of being “insincere and misleading, an insult to victims and an enduring shame for Germany.”[5] The names were removed from the book of honor only in 1992, following public pressure. More recent controversies and debates are caused by the continuation of search and reburials of German WW2 soldiers, especially in large-scale operations such as the ones for the opening of a Volksbund cemetery in Smolensk, Russia, where 70,000 German soldiers are commemorated despite having fought against the Russians. Finally, to offer a concrete, if personal, example: every time I mention my research interest in military commemoration, young native Germans tend to immediately point out the questionability of being involved in such activities.

Yet there is a very different picture of military commemoration which emerges if we turn our attention not to the origins of German monumental cemeteries, but to the new generations involved with them. In fact, under the motto “reconciliation over the graves,” the Volksbund organizes work camps which promote contact among nations formerly involved in WWII. They involve the youth in cemetery maintenance both in Germany and abroad, alternating history lessons with memorial ceremonies and recreative activities. It is by taking part in some of these volunteering activities that my eyes were opened to the different reality of military commemoration, and to how some members of the new generation (young people generally between 15 and 25) decide to engage with the difficult legacy of WWII. To openly discuss the ambiguities of military commemoration, and to hear an informed opinion from someone who has participated to several Volksbund activities, I contacted Richard [whose name has been changed to protect confidentiality], a 21-year-old Volksbund volunteer and student from Germany, whom I met in one of the Volksbund summer camps.[6] Among the various participants, I decided to contact him not only because of his keen interest in German politics and his manifest opposition to nationalistic parties, but due to his active participation in the organization of international work camps. 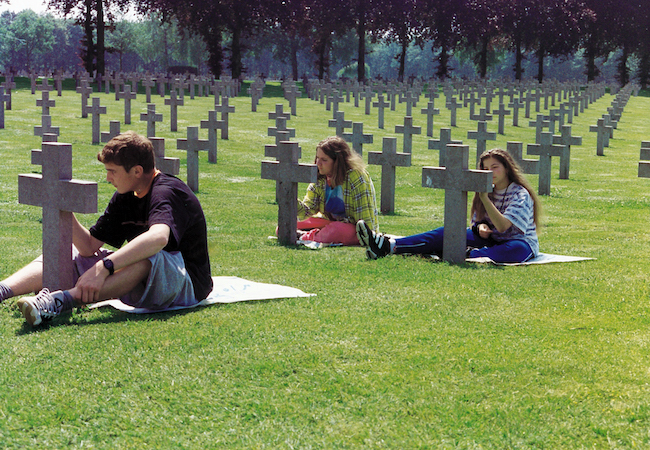 As Richard pointed out, because of the vivid memory of the Third Reich in Germany, “Germans tend to be very careful” not only with the “glorification” of soldiers, but also with anything related to the military, especially so when a historical dimension is involved. He then added that the idea of taking responsibility for the crimes of the Reich is very important to the self-understanding of Germany. He specified that this does not mean that every German is considered individually responsible, but rather that there is a “historical responsibility” to prevent such events from occurring again, to learn from the mistakes made, and to deal with their consequences (especially concerning Germany’s relationship to Israel and war compensations, based on the consideration that present-day Germany is the legal successor of Nationalist Socialist Germany).

Richard also elaborated on the rationale of Volksbund youth work, the aspect with which he is most involved. He argued that it is important to remember what wars and persecutions are and cause. “Education and international ties,” he said, create “the theoretical and social basis to prevent this from happening ever again.” This is crucial: although engaging in military commemoration is perceived, in a German context, as a rather dubious activity because of the reasons listed above, Richard shows instead that the views of right wing extremists and others nostalgic for the Third Reich stand markedly opposite to the aims of the Volksbund youth work, which promotes reconciliation and intercultural communication. 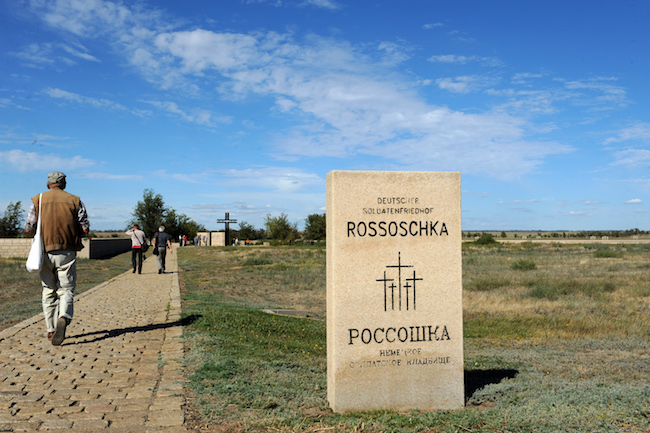 The German graves in Wolgograd, 70 years after combat. Image via Volksbund

Even if youth camps have fundamentally positive intentions and outcomes, the delicate question whether memory work may equate victims to perpetrators remains, as the construction and upkeep of monumental cemeteries for German soldiers conveys the idea that both the victims of the Holocaust and the soldiers buried there were the victims of a senseless war. As shown by the Bitburg Controversy, it was precisely the definition of both Jews and German soldiers as victims of the Nazi regime which was particularly offensive to the Jewish community, and one that acquires an especially strong political character in the contemporary social scene. In fact, far right movements insist on the idea that “collective guilt” for WWII, and the strong focus on the memorialization of the Holocaust, keep on weighing down generations which no longer have any blame for the acts of their forbearers. The statements uttered in this regard by Bjorn Hoecke, politician in the populist and right-wing party Alternative fuer Deutschland, were spread in the international press when, in the beginning of this year, he called a Holocaust memorial in Berlin “a monument of shame.” He also added that Germans are the only people in the world who would plant such a monument in the heart of their capital.

As the tragic events commemorated by memorials dedicated to the victims of WWII become more and more remote, the public perception of German military cemeteries raises uncomfortable questions about how long the future generations will maintain an emotional bond with these spaces, for how long they will still be able to sympathize with the indignation and motivations from the several parties involved in the debates, and when both victims and perpetrators will be definitely consigned to oblivion. Nobody wants their suffering to be forgotten, especially when their individual histories exemplify the horrors to which a whole people were subjected. These cemeteries are historical witnesses of a systematic, large-scale operation of ethnic cleansing. Yet, memory, like monumental commemoration, is an essentially fluid phenomenon: although German monumental cemeteries have had an undeniable role in propagating nationalist ideals in history, and despite the many controversies of the past, the appropriation of these spaces by new generations, eager to lay out the social and theoretical background to prevent future conflicts from happening, should be welcomed as a fundamentally positive endeavor.

[3] Menachem Rosensaft, Chairman of the International Network of Children of Jewish Holocaust Survivors. These words were pronounced before a crowd of holocaust survivors in Philadelphia. Quoted in “The Bitburg Controversy,” Jewish Virtual Library, accessed May 17, 2017, http://www.jewishvirtuallibrary.org/the-bitburg-controversy

[5] Livingstone, “Remembering in Foreign Soil: the Activities of the German War Graves Commission,” 73-74

[6] Conversations between the author and Richard took place via Facebook Messenger beginning on May 8, 2017