all we did for the moon / New Rural Landscapes

What is it like to live with the moon? (All of us live with the moon, more or less, until we die under it.) Asiya Wadud’s ekphrastic response to Alessandro Poli and Superstudio’s New Rural Landscapes contemplates the moon as an object haunted by human histories of projection—not least pernicious attempts to claim it under the goad of nationalist, technoutopian sentiment—and as an object of collective longing that resists any definitive touch (one is reminded of William Blake’s 1793 engraving of small figures leaning an unimaginably long ladder from earth to crescent moon, captioned, simply, “I want! I want!”) The moon, in itself, is not a haunting, except that we make it one: come to thee, moon, by moonlight, though hell should bar the way. (God willing and the crick don’t rise.) Is this a “waxing knowledge,” as Wadud puts it? Her questions hang in a low hum. —Rebecca Ariel Porte, Poetry Editor

what if we veiled the moon in a thin film
all weft?


when we saw the shadow we didn’t see what cast it
just the long, slim armature of the earth


what if we veiled the moon in a thin film
all warp? 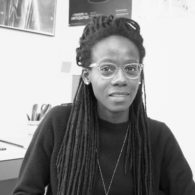 Looking out the window on the train