To view all the candidates, please use the scroll arrows on the image above.

#CrowdedField is a continuation of a gallery installation that I did in 2016, entitled #Bellwether (http://rouxpz.com/bellwether). That project, commissioned by SPACES (http://spacescle.org) in Cleveland, Ohio—coincidentally, my hometown!—aimed to use social media in order to obtain a more nuanced read than was typically offered on the sentiments of Ohioans during the 2016 Presidential primary season, by using Twitter posts as source material. The objective of #CrowdedField is very similar, except this time the sights are set on the candidates for the 2020 Democratic nomination: what has been consistently referred to by the media as a “crowded field” of hopefuls.

I collected tweets that explicitly mentioned the candidates by name between March 4 and March 29 of this year. I ran a variety of algorithmic language analyses on the content of the postings to determine the frequency of similar or identical posts and phrases, grammatical structure, and the like. I most commonly used something called “regular expressions,” which are text-matching patterns that look for specific words or phrases within the data. I then used the results to doctor the campaign design of ten Democratic aspirants [Ed.: now eleven, with Joe Biden added); colors, logos and typography have all been painstakingly replicated, but instead of reflecting the candidates’ curated messages, each image represents how they are being discussed online.

Each animation that you see here represents five of the most commonly used phrases on Twitter dealing with a particular candidate. The dataset consisted of approximately 6.5 million collected tweets collected between the aforementioned dates. Signage was made for the most frequently discussed prospects, who have officially announced their candidacy at the time of publication.

These projects were born in 2016 as an examination of public opinion, but they have taken life as a tribute to the diversity of political expression. In the age of Big Data, where human behavior is treated as something to be quantified and represented as a mass entity, I am fascinated with how individual voices and qualities emerge and are made legible: the unique, distinctive and idiosyncratic. Rather than (as many social media analyses attempt to do) massage these traits into boilerplate approval-disapproval measurements, my work seeks to celebrate them—and, in doing so, to salute political and cultural voice in both its individual and collective forms. 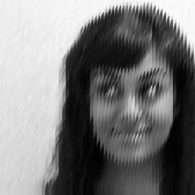 Searching for humanity in the Big Data machine